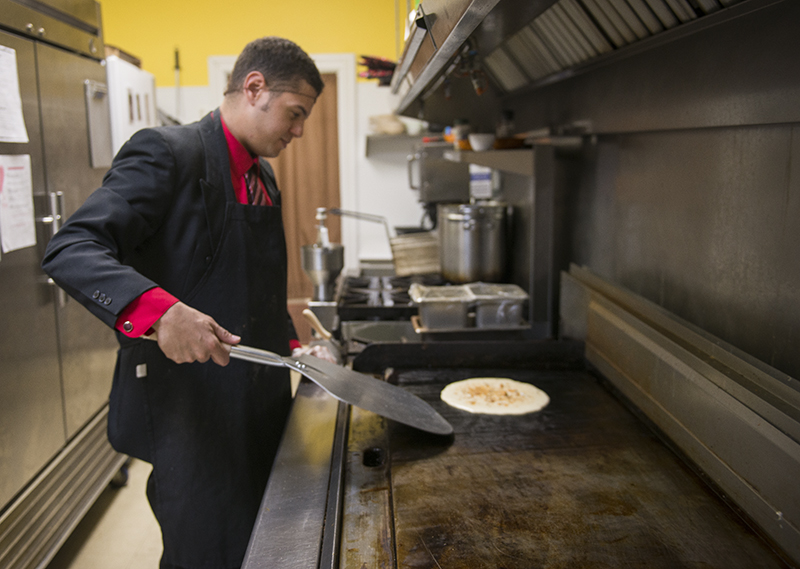 Many strive for a job they love. For an Austin man, incorporating his heritage and passion into his line of work is leading to a lot of happy customers.

Tony Enright-Montoya, 27, is the owner and operator of The Green Ranch, which opened about two weeks ago in Northbridge Mall. The restaurant features burgers, pancakes, coffees, smoothies, shakes and appetizers. His signature dishes include the Cuban reuben and Tijuana burger.

Montoya’s food is inspired by American, Cuban and Mexican cooking, and he hopes to offer a Korean barbecue burger.

“I will be incorporating more ethnicities into my food in the next few months,” Montoya said.

Montoya and his wife, Virgen, have a daughter, Jasmine, and a son, Samuel.

Cooking runs deep in Montoya’s family. His mother was an award-winning cook and his father was a chef. Montoya remembers measuring items and helping his mother bake from scratch when he was growing up. His father taught him how to marinate meats.

Montoya said he uses his Cuban heritage in cooking meat and his seasoning. His wife is from Havana, Cuba.

“I’m an American,” he said. “I get to sit there and have the opportunity to see how they cook with my own eyes.”

“I’ve tried to help do a lot of great things, but I’ve never had the opportunity to have my own business,” he said.

Montoya has overcome difficulty in his life. He was not close to his father growing up, and he has been homeless three times.

“I thank God for all of the times he’s smacked me in my face and said, ‘Hey, get things right or things are going to get worse for you,’” he said. “God saved me.”

Montoya hopes to volunteer once a month at The Salvation Army and wants customers to recognize that his restaurant is about loving and caring.

“God gave me this place; I am going to live my life like this is a blessing,” he said. “I’m not going to live this like I want to be rich.”

The Green Ranch is open from 9 a.m. to 9 p.m. Tuesdays and Saturdays; from 9 a.m. to 5 p.m. Wednesdays and Thursdays; and from 1 to 6 p.m. Fridays. Children with a qualifying adult eat for free after 4 p.m. on Tuesdays, and Montoya hopes to have performers on Saturday nights.

If his restaurant is successful, he hopes to hire employees and expand to Minneapolis.

“That what they paid for was worth it.,” Montoya said. “My food is not about being fast. I’m serving gourmet food at low prices.”