Officials travel to Capitol to talk about sales tax with legislators 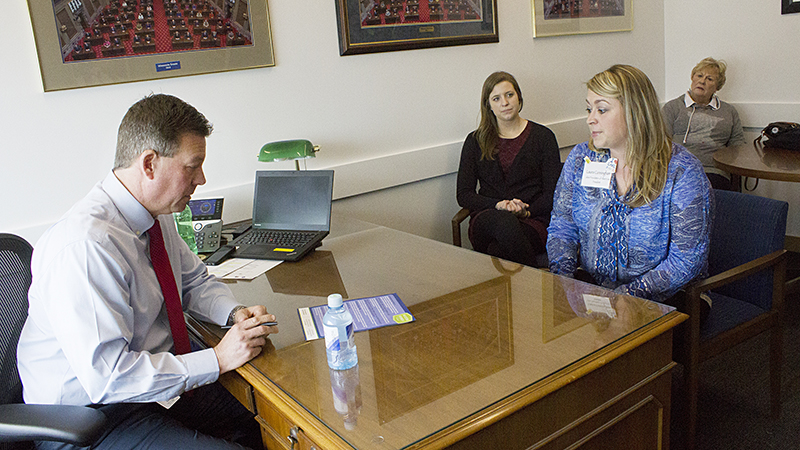 The visit came after the district’s request to extend the sales tax for either 15 years or until $15 million has been collected was introduced earlier in the legislative session. District 27 Sen. Dan Sparks. DFL-Austin, and District 27A Rep. Peggy Bennett, R-Albert Lea, are authors of the bill.

Davids, chairman of the House Tax Committee, said he hopes the initiative is included in a report that will be submitted to him by Property Tax and Local Government Finance Committee Chairman Steve Drazkowski, R-Mazeppa.

Though the sales tax has some hurdles to clear in the Legislature, Freeborn County is ready for the tax to be renewed, he said.

Assisting the city of Albert Lea to secure $6.1 million for the Albert Lea landfill cleanup in Edgewater Park.

• Leading efforts to secure state grants for a new dam on Albert Lea Lake and to secure a 257-acre property that encompasses the headwaters of the Shell Rock River.

• Having a combined $5.39 million in funding from partners to restore, protect and enhance land benefiting 2,866 acres for fish, waterfowl and wildlife.

The tax generates approximately $1.2 million per year, has generated $14 million in local sales tax and has leveraged $21.9 million in outside funding since 2006.

Cunningham presented legislators with a letter of support for the tax from Albert Lea-Freeborn County Chamber of Commerce Executive Director Randy Kehr and discussed local support for extending the sales tax. Voters approved extending the tax in November with 71.56 percent support.

Bennett and local officials also discussed funding the construction of a bridge across Albert Lea Lake to connect Blazing Star Trail from Albert Lea to Hayward.

Bennett and Sparks expressed optimism that extending the sales tax will be approved this year and thanked officials for visiting the Capitol.

“I just appreciate that, because local input is critical to my job,” Bennett said.

“I think it shows broad support from a lot of different individuals and it makes a big difference when they take the time to come up here,” Sparks said.