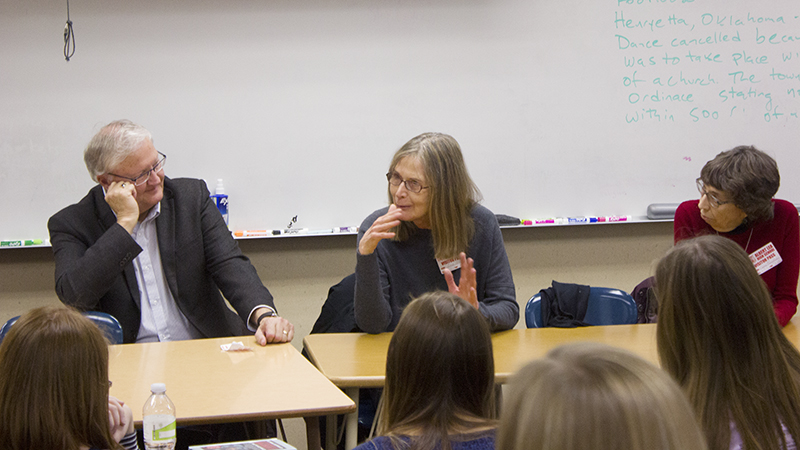 Panelists discuss the impact the Wilson & Co. strike had on their family and friends. — Sam Wilmes/Albert Lea Tribune

Albert Lea High School students were given first-person perspectives of one of the darkest chapters in the city’s history on Thursday.

Eight people who were impacted by the Wilson & Co. meat packing plant strike in 1959 discussed how the strike impacted their lives to students in Jim Haney’s humanities social classes.

The visit was made in connection with students reading parts of the book “Packinghouse Daughter” by Register. The book centered on Register, who grew up in the 1950s in Albert Lea and the impact the strike had on her.

The panel was set up by Eva Barr, who is writing a play based on Register’s book, which will be presented by Albert Lea students April 29. Students will also provide historical interpretations that afternoon.

Students asked the panelists about what it was like to live in Albert Lea during the time of the strike.

The dispute between Wilson & Co. and the United Packinghouse Workers Local 6 began in the summer of 1959 as a dispute about mandatory overtime hours scheduled by the company.

It escalated after the workers’ contract expired between the two entities Sept. 1, 1959, and then on Nov. 3, 1959, the union officially called strike.

Haskins said he had friends whose parents were affected by the strike, but it never became an issue between his friends, he said.

“We were friends, and we really didn’t let it come between us,” he said.

Haskins remembered the strike dividing the community, however.

Another panelist remembered his parents having $3,000 in savings that were wiped out during the strike.

Bachtle worked 15 years at Wilson & Co. and was the chief steward of the ham boning department at the company.

He remembered hardships caused by the strike, but said they are sometimes a necessity. He remembered employees on strike and the plants being filled with strike breakers, which caused friction.

Violence erupted on Dec. 9, 1959, with car windows broken. Judge John Cahill issued contempt citations against the union and three union members, citing them for violation of a restraining order prohibiting illegal interference with entry to the plant.

That afternoon, nearly 1,000 picketers and sympathizers gathered outside the plant, stoning cars carrying nonunion workers from the plant and tipping three cars over. One man was hospitalized.

Haskins recalled not being allowed to leave the house after 10 p.m. after martial law was declared.

Wilson and the union agreed to resume bargaining on Dec. 13, 1959, and the plant re-opened later that month.

More violence erupted on Jan. 7, 1960, in Albert Lea as two cars were burned, another was pushed into the lake and at least three people were threatened with death. On Jan. 10, 1960, the home of a nonunion Wilson worker was reportedly set on fire, and windows in the homes of two others were broken two days prior.

The strike lasted through Feb. 23, 1960, when the two entities agreed to arbitration, though many workers were not called back for months.

On March 10, 1960, a three-man arbitration panel in Chicago ruled that all but about 300 striking employees at seven Wilson plants could return to their jobs.

Haney said the discussion was beneficial to students.

“This is first-hand history right here,” he said. “These are the people that lived it, and there’s nothing better in history than to taste, touch, smell, feel, know what somebody else did from their own mouth.”

Skinner Peck said she came to discuss the 1950s.

“Most of the businesses were local,” she said. “And the income stayed in this town.”