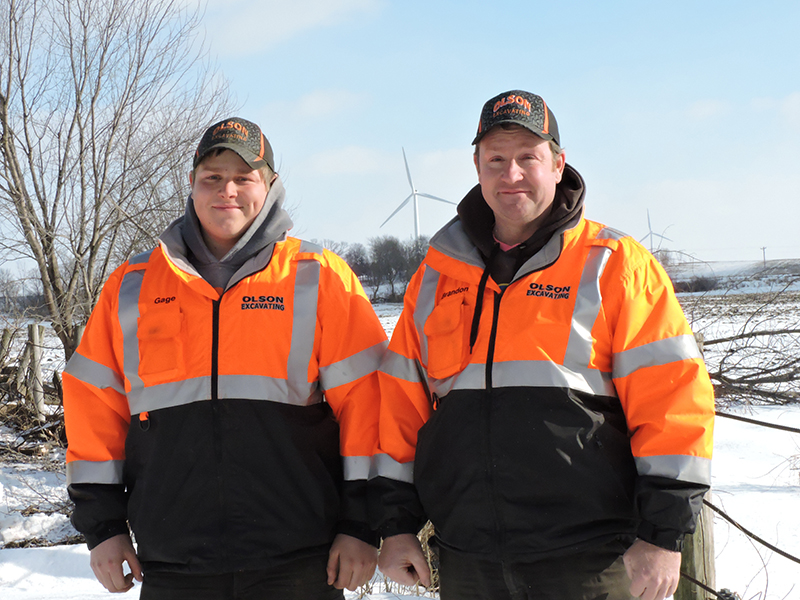 Gage Flatness hopes to one day take the business over from his father, Brandon. Kelly Wassenberg/Albert Lea Tribune

HARTLAND — Most typical 3-year-old boys get a kick out of playing with toy dump trucks in their sandboxes. Brandon Flatness’ sandbox just happened to be a little bigger than most would expect.

“My mother tells a story that I started running a backhoe, by myself, when I was 3 years old,” he said.

Flatness wasn’t at the playground or a neighborhood park though. He was out with his grandfather, Leslie Olson, who owned his own excavation company.

“He had five daughters, so when I came along, I was kind of the first son, so to speak, even though I was a grandson,” Flatness said. “I really liked it and showed significant interest in it at that time.”

Decades later, Flatness bought the company from his grandfather, and it’s still a multigenerational family business to this day. His grandfather worked for him for seven to eight years before finally retiring at 80. Flatness’ brother and father-in-law work with him now, as well as his 22-year-old son, Gage Flatness, who’d like to take over the company one day.

The company has grown significantly since its early days, too. From its conception in 1965 to 30 years later, Leslie Olson ran the company with only one other employee. 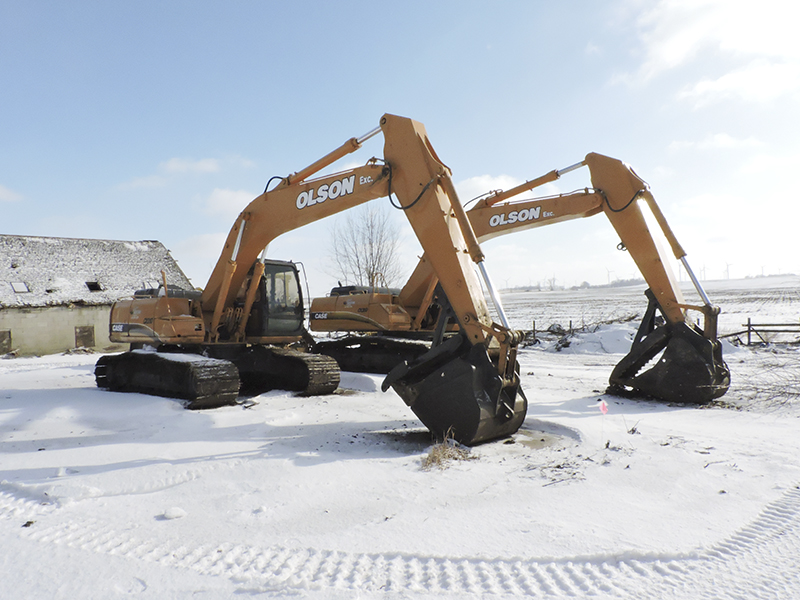 Olson Excavating in Hartland uses a wide varies of excavation equipment, which allows them to tackle jobs of almost any size. During the winter, however, most of the equipment is stored on or offsite. Kelly Wassenberg/Albert Lea Tribune

“The farming economy rose so much that it drove us to be bigger, more than anything,” Flatness said.

Flatness currently has five other full-time employees and has a couple others that help out during the summer. He is looking to potentially hire two more employees and feels he has secured enough winter work to keep them busy.

“Then we can give them a year-round position,” he said.

Like many companies that do seasonal work, Flatness has diversified his work to allow his business to thrive throughout year. This includes working for the cities of Hartland, Freeborn, New Richland, Hollandale and Alden whenever they need excavation work done. Water lines, sewer pipes and storm drains repair are some of the projects they take care of for these cities.

“We do just about anything that revolves around dirt,” Flatness said. “We’re really a well-rounded company as far as that goes. There’s nothing we won’t really tackles, so to speak.”

Although they do travel to job sites, according to Flatness they’re almost always within 15 minutes of home and for good reason.

“We have a very broad client base and we take care of a vast majority of the farm sites and the farmers in this area.”

Flatness said he has a dedicated customer base, and by expanding or growing much more, he could potentially put his ability to give them prompt service at risk.

“We really haven’t run into a project that is too big for us yet. We’re small enough that we can run out and do your half-hour tile repair fix,” he said.

The variety and flexibility of his schedule are important to him.

“It’s something new every time and that keeps us interested,” he said of the projects he works on.

For Flatness, it’s more than just the work that will keep his family business in the town of Hartland, though — it’s the people, the loyal customers and farmers that keep him busy even in times when the farming economy is seeing a dip.