Pilot walks away from plane crash 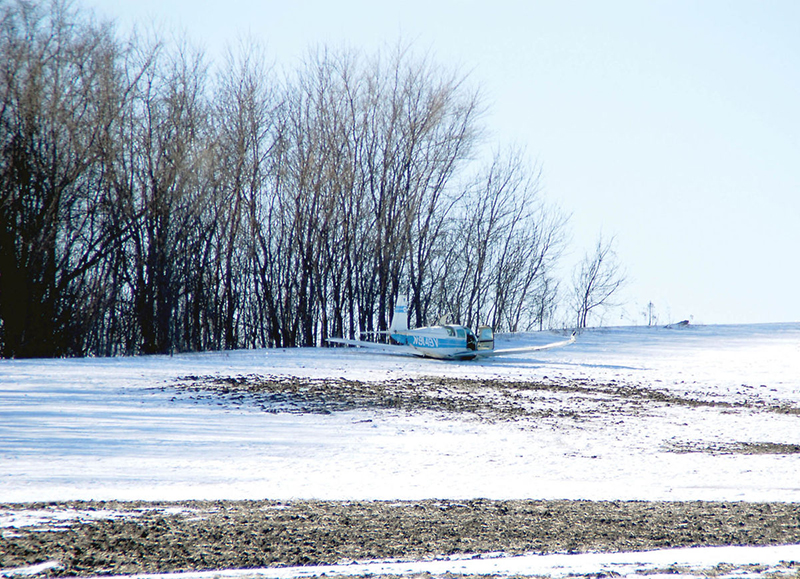 A small plane sits in a field north of Beaver lake after crashing Thursday evening. The pilot was able to walk to a nearby residence to seek help. - William Morris/Owatonna People’s Press

ELLENDALE — A plane crash Thursday outside Ellendale put to the test the old saying that any landing one can walk away from is a good one.

According to a National Transportation Safety Board spokesperson, a single-engine Mooney M20M aircraft took off from Duluth at about 6:10 p.m. and disappeared from radar at about 7:50 p.m. The Federal Aviation Administration reported the plane missing to the Rice-Steele Dispatch Center at about 8:15 p.m., according to Steele County officials.

But it was not until about 9:10 p.m. that the plane and pilot — identified by the Steele County Sheriff’s Office as Daniel Bass, 39, of Winona — were located, after Cynthia Crabtree of rural Ellendale heard a noise outside her home.

“I was just sitting in the sun room, and I heard this bang on the siding of the house, and I heard, ‘Help me!’” she said. “So I looked out the window, and there he was looking at me. I saw his face was all full of blood, so I brought him into the house and called the ambulance.”

The plane had come down in a field just west of 72nd Avenue Southwest and north of Beaver Lake, and Crabtree’s was the closest home. Crabtree said she had heard a noise at about 8 p.m. that she had thought at the time was a falling tree, but it was not clear when exactly the crash occurred, or what transpired between the crash and the pilot arriving at her home.

Crabtree said the pilot, who was taken from the scene by a North Memorial helicopter, seemed alert and responsive after reaching her home.

“He was talking the whole time and wanted me to call his wife, let her know he was OK,” she said.

Sgt. Gary Okins of the Steele County Sheriff’s Office said the flight path filed for was from Duluth to Winona, but the plane “went off course” and ended up in the field north of Ellendale. Bass was flown to Rochester for treatment and remained in St. Marys Hospital on the Mayo Clinic campus as of Friday afternoon, Okins said. FAA records show the plane (identified as an M20C model) is registered to Bass.

The pilot’s wife, Deanna Bass, told the Pioneer Press that her husband may have been affected by carbon monoxide fumes during the flight. She described his injuries as non-life-threatening.

A spokesperson for St. Marys reported his condition Friday afternoon as fair.

Both NTSB and the FAA are investigating the crash, which the FAA said caused substantial damage to the plane. The FAA spokesperson said his agency’s investigation will take several weeks at minimum, while the NTSB said a preliminary report could be finished in about a week.

The Steele, Waseca and Freeborn County Sheriff’s offices; Minnesota State Patrol; and Ellendale Fire and Ambulance assisted at the scene. Officials continue to ask the public to avoid the immediate area.