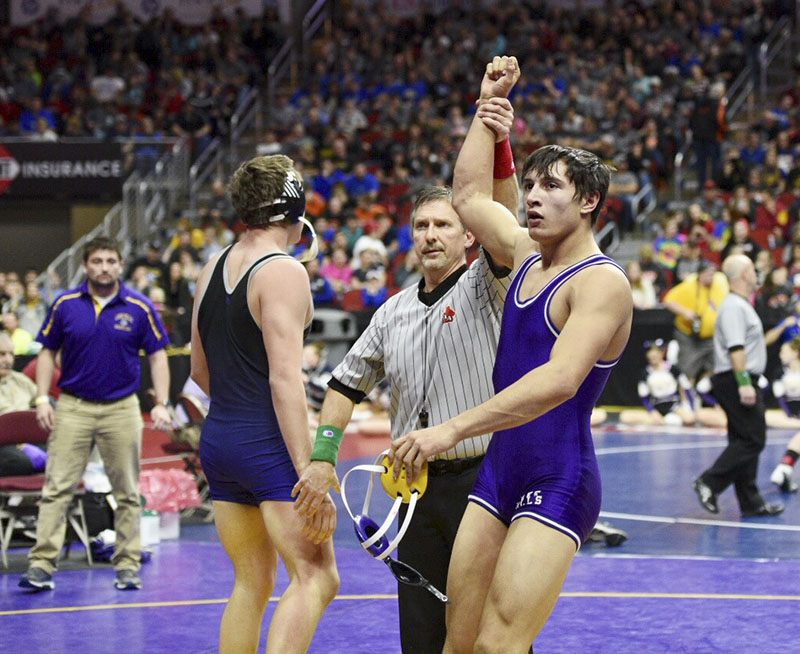 Lake Mills wrestler Slade Sifuentes was crowned a state champion in the Class 1A 195-pound class. It was his second straight state title. Lory Groe/For The Albert Lea Tribune

Saturday marked the final day of the Iowa State High School wrestling tournament in Des Moines, Iowa, and Slade Sifuentes was aiming for his second straight Class 1A state title.

Sifuentes came into Saturday night’s championship match with a winning streak of 109 straight matches. And he extended it to 110 matches and won his second straight state championship for Lake Mills with a big win. 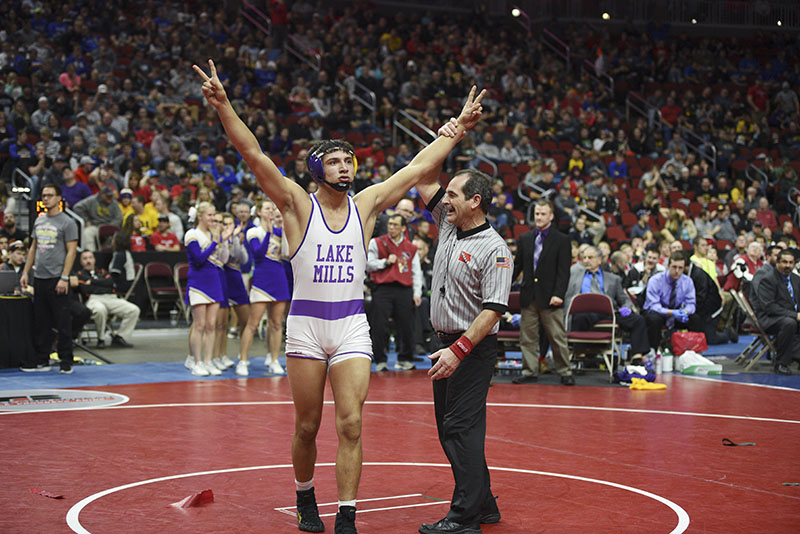 Sifuentes took on West Hancock’s Hunter Hagen in the championship match. Sifuentes jumped out to a 2-0 lead in the first minute of the match. He extended his lead to 4-0 just before the end of the first period.

Hagen never seemed able to recover from the first period. Sifuentes got up 6-0 halfway through the second period. He scored three points at the end of the second period to make it 9-0 and put the match out of reach.

But Sifuentes didn’t let up. He toyed with Hagen and expanded the lead to 16-0 to win by technical fall, asserting his dominance in Class 1A. Ever since he lost in the state tournament in 2015, Sifuentes carried the pain he felt and exerted it on any and every opponent over the last two years.

Sifuentes had little trouble making it to the championship round. In his first match, Sifuentes dispatched Manning Kuboushek via pinfall at the 3:58 mark to advance to the quarterfinals. Sifuentes matched up with Kaleb Reeves in the second round, and took him down by a 6-3 decision. Sifuentes faced off against Tyler Anderson in the semifinals, but like he has done all season, pinned him at the 1:59 mark just before the first period ended.

Jones (46-2) came in as the No. 1 seed in the 106-pound weight class and faced Wapello’s Daniel Meeker in his first match of the day.

Jones jumped out to an early 2-0 lead, but Meeker battled back to take a 3-2 lead late in the match. In the closing seconds, Jones retook the lead and win the match, 4-3, to advance to the next round. 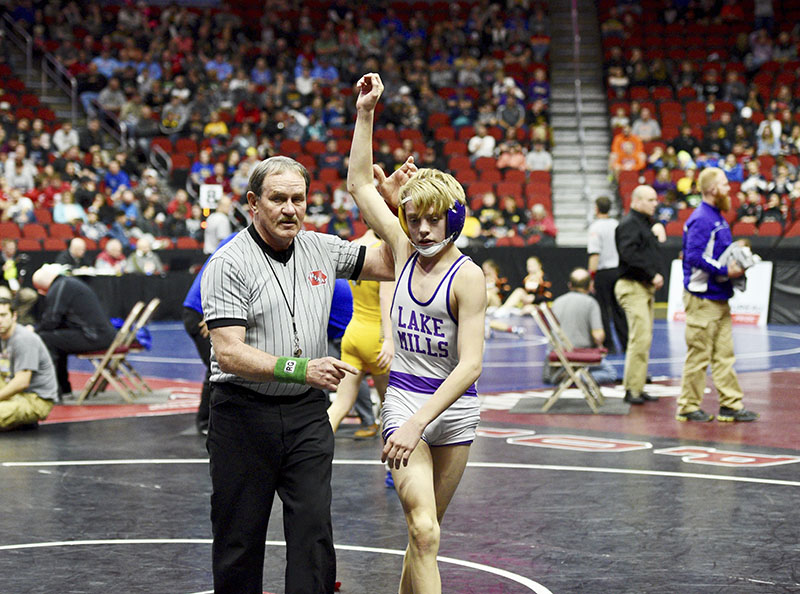 In his next match, Jones fell to Alex Allard in the semifinals, which sent him to the consolation bracket, but still a chance to claim third place. Jones matched up with Jake Nieman and defeated him 6-4.

That would set him up with a match against Bryce Krafton in the next round. Jones would then face Jaymus Wilson, who would end up defeating him 6-3.

The loss sent Jones to fifth-place match, where he would meet up with a familiar face — Meeker. The only thing that would change is the score. Jones hung on to defeat Meeker, 7-5, and place fifth at the state tournament.

Helgeson (43-10) fell behind in his opening match against Don Bosco’s Easton Larson, 4-0, in the first period. Then, Larson extended his lead to 6-1. Larson pinned Helgeson at 3:08 of the match.

The loss sent Helgeson to the consolation bracket where he matched up with Quest Brown of West Valley Central. Both wrestlers wrestled to a stalemate in the first period, and it would stay that way until Helgeson scored three points in the closing seconds of the third period to win the match 3-1 and advance in the consolation bracket. 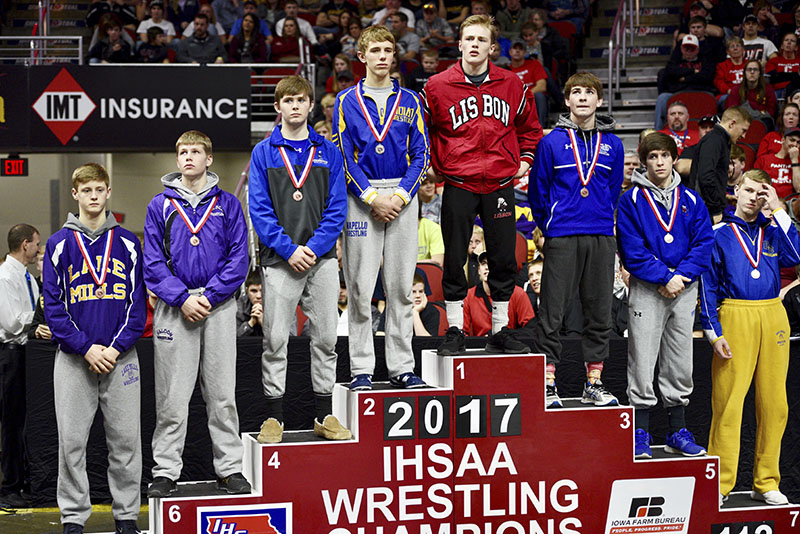 After defeating Brown, Helgeson faced Bryce Hall, who he defeated 5-3. The win helped Helgeson advance. He would face Jacob Ragsdale with a chance at third place still in sight. But Ragsdale had different things on his mind. Ragsdale earned a pin at 3:12 of the match to send Helgeson the seventh-place round.

Helgeson took on Don Bosco’s Easton Larson for a shot at seventh place. He was unable to register a point against Larson, losing 6-0 to come in eighth place.

Boehmer (34-10) took on West Sioux’s Kory Van Oort (39-5). Van Oort took control early and didn’t let up against Boehmer. He jumped out to a 2-0 lead and didn’t look back, winning 9-0 to advance one step closer to the championship match.

In the consolation bracket, Boehmer faced Gabe Surles of Clarinda Academy. Boehmer took control early and found himself up 6-0 before Surles could get on the board with two points. Boehmer would add another point to take a 7-2 lead into the final period. The two wrestlers would trade points in the third period, and Boehmer kept Surles at bay to win 11-4 and advance to the next round in the consolation bracket.

After defeating Surles, Chase McLaughlin was in Boehmer’s sights. He had little trouble with McLaughlin, pinning him at 3:07 of the match to advance.

Boehmer would face more resistance in his next match with Guy Sudmann. Sudmann didn’t wait too long to put the hammer down on Boehmer. He scored quickly and often, and earned a technical fall win (22-7) and sent Boehmer to the seventh-place match. 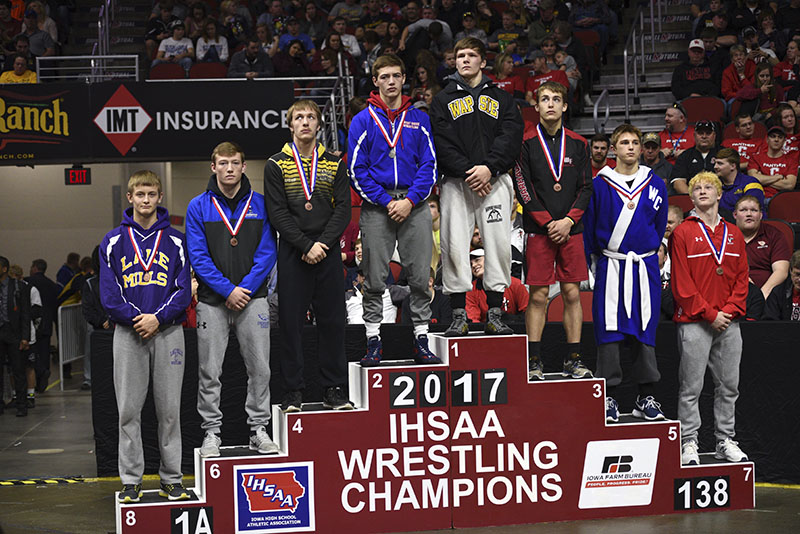 Michael Olsen’s state tournament ended sooner than he would have liked. The senior was bounced after his loss to Drew Anderson.

Olsen (49-5) took on Mediapolis’ Brennan Swafford (45-1) in the first round in the 152-pound weight class. Swafford showed Olsen exactly why he had lost only one match coming into Thursday’s meeting. Swafford went up 2-0, but Olsen showed some life by cutting his lead in half, 2-1. But it was all Swafford after that. He built a 6-1 lead before pinning Olsen at the 2:43 mark of the match. 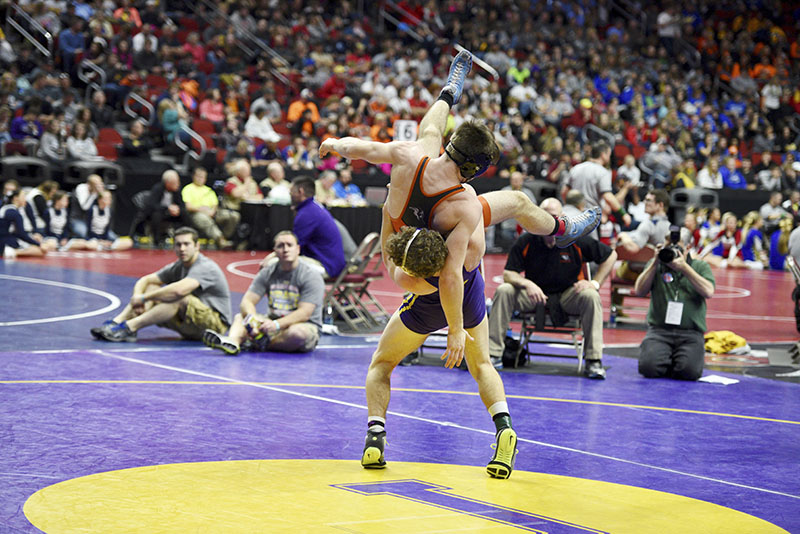 Lake Mills wrestler Michael Olsen picks up his opponent in a match on Thursday. Olsen made it to the state tournament for the second time in his career, but didn’t place.

Coming off his loss to Swafford, Olsen rebounded with a victory over Sebastian Berg via pinfall to advance in the consolation bracket.

After beating Berg, Olsen met his fate in Anderson. Anderson pinned him in 2:17, ending his state tournament appearance without placing.

Gabe Irons was the third Lake Mills wrestler to come in eighth place.

Irons (47-5) took on Daniel Bishop (34-0) of Hinton in the 182-pound bracket. Bishop took an early 2-0 lead in the first period. Irons managed to tie up the match at 2-2 in the second period before Bishop quickly responded to take back the lead. Bishop would extend his lead to 7-2 and would end up winning 8-3.

Irons’ loss set him up with a match against Dante Arzani, of Interstate 35, in the consolation bracket. Arzani took an early 2-0 lead in the first period, but Irons would tie the match just before the buzzer sounded. Both wrestlers didn’t manage a point in the second period, but Irons took control in the opening seconds of the third period to go up 6-2. Irons would hang on to win by that score.

After winning, Irons faced Sam Gregory. In a high-scoring affair, Irons came out on top to win 9-7. The win sent to him to face Central Springs’ Zach Ryg.

Rgy took control of the match and defeated Irons, 12-5.

Irons faced Joey Schwenn in the match that would determine seventh place. Schwenn stayed in control for nearly the whole match, winning a major decision, 12-4.