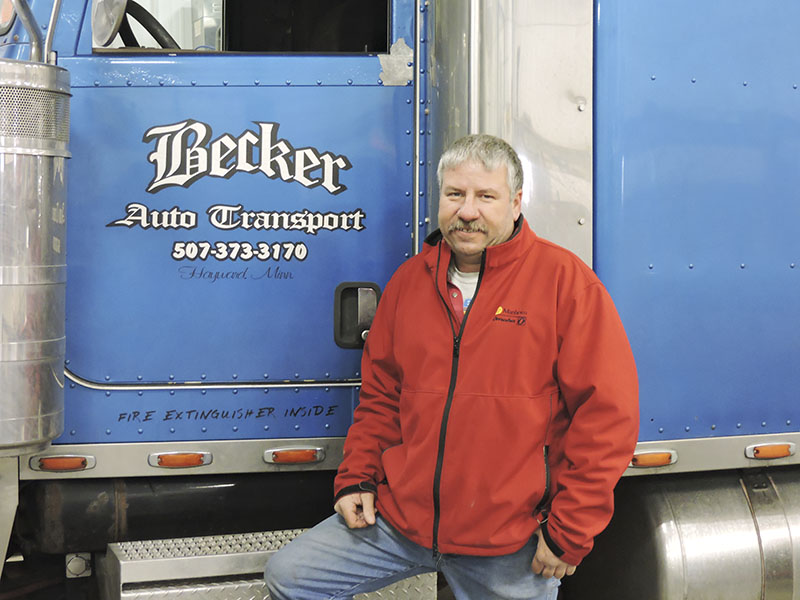 HAYWARD — Some things just happen naturally — like a toddler taking their first steps. One step leads to another and another, and before you know it they’re off and running.

Mark Becker’s journey into becoming a businessman was just as natural of a progression for him. Growing up watching his parents sell semis in Alden, he decided to go into a similar line of work after graduating high school in 1989.

Becker started his transport service that year. He he was hired to move vehicles from one location to another  — typically for auto dealers who purchased stock out of state and needed it brought to them. He added a truck sales and service division, specializing in three-quarter ton and one ton trucks, in 2000.

Thirteen years ago he moved his operation to Hayward, moving one more time to his current location at 80944 Freeborn County Road 46 in Hayward in 2009. In the beginning, there was a gas station on the lot that he never utilized. He razed that building in 2010 to build his current facility, which allows him to fit both his transport business and truck lot onto one property.

While he’s now on a more visible corner, Becker notes people seem to think little of the drive to Hayward to check out a vehicle.

“A lot of guys don’t stock the stuff we stock, so we got our own niche,” Becker said.

That doesn’t necessarily mean that it has all been smooth sailing for the entrepreneur, though.

“Everything changes, so you just have to roll with the changes,” he said.

Many times this means dealing with fluctuations in the market.

In that respect, his businesses complement each other well.

He’s able to transport the trucks he buys to his property, and if one aspect of his business isn’t looking the best, he has the other to fall back on.

“If things start going downhill, you just change your plan.”

Becker doesn’t fret much these days. After spending many years on the road hauling cars across the country, he’s more focused on his truck sales. His company still does plenty of transport work, which is done by either himself or his staff.

According to Becker, most of his work comes to him these days. Eighty percent of the people who buy trucks from him buy their subsequent vehicles from him as well, and he gets plenty of work from referrals when it comes to the transport end of things.

Over the years, Becker said he has worked with 60 to 80 different businesses, and they often send more business in his direction, including that of snowbirds who contract Becker to bring their vehicles to them as they go south for the winter.

Overall, Becker is content with how things have turned out in Hayward and has no plans to go anywhere anytime soon.

“The community is awesome,” Becker said. “And they really stand behind us.”