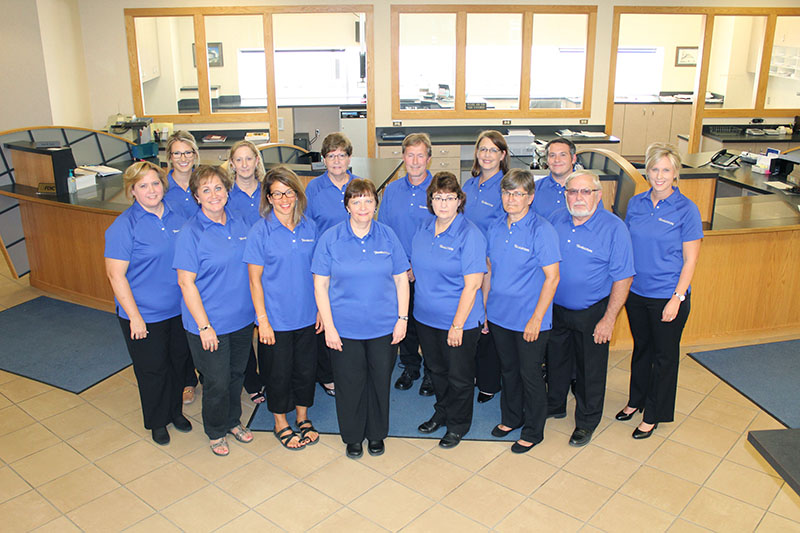 Peoples State Bank in Wells has 14 employees, which is double the size that it used to be before it merged with Paragon Bank. - Provided

WELLS — Sept. 12 marked the day Peoples State Bank opened for the first time with Paragon Bank of Wells under its umbrella.

This merger was unique because both banks were of similar asset size before the acquisition.

According to Lauren Schuster of Peoples State Bank, in the banking world this is extremely rare — with larger banks usually buying smaller banks. This means Peoples State Bank was considered strong enough by the state and the Federal Deposit Insurance Corp. to complete the acquisition.

Security State Bank, which changed its name to Paragon Bank in August 2000, was approved for charter in May 1925 and opened Aug. 31, 1925. Vincent and Thomas Hart purchased the bank in 1958, and Hart descendants operated it in later years. In August 2000, Security State Bank changed its name to Paragon Bank, which means a model of excellence, operating under that name until its acquisition by Peoples State Bank in 2016.

Peoples State Bank of Wells was granted a petition for organization on Feb. 29, 1924. It has provided residents and businesses of Faribault, Freeborn and Waseca counties with a variety of dependable financial services since then.

In November 2002, Peoples Bank moved its location from Main Street to a new building at 98 Third St. SE. The former Peoples State Bank building had been remodeled and expanded twice, but the lack of parking and room for a drive-thru made a move and a new building the logical choice.

Looking to expand, the opportunity to purchase Paragon Bank in 2016 seemed a natural fit. The acquisition puts Peoples State Bank in a position to provide community banking services into the future. It is a true community bank with decisions for the operation being made locally.

According to Schuster, the employees take pride in their work because they incorporate ethics and small town morals into everything they do.

Peoples State Bank has 14 employees since the acquisition — doubling the staff. Today, Peoples has a larger lending limit, allowing it to service more needs of the area. Because of this, it also can contribute to more community service projects — such as their scholarship program, which has given over $114,000 in the past 16 years — and can commit to helping make the community stronger by volunteerism and donations to community organizations.

Peoples State Bank has been family owned by the Smith family from southern Iowa since 1978. It offers a full range of financial services, including agricultural lending, home mortgages, home equity loans and all types of consumer loans. Internet banking, debit cards, online bill pay and e-statements allow customers to bank wherever they are. It is FDIC-insured.