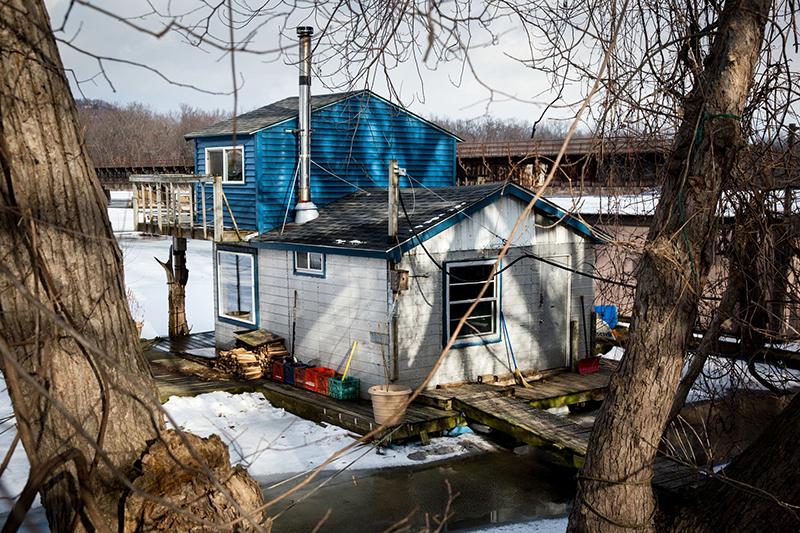 It seems an enviable life for anyone who loves nature, except in those times when nature tries to take back the neighborhood.

Winter living in a houseboat stuck to the frozen Mississippi, for instance, means fighting off the ice that forms on the house during the freeze-thaw cycle. Unless the ice is kept at bay, water might flood in through a crack under a door or at the seam between the hull and an outer wall. It can pull the house apart, or under.

Swanson said that’s what happened to a neighbor’s home, now partially submerged in the ice.

“This guy at least twice has run a chainsaw around his house so it will pop up,” Swanson said. “It’s a very wet job.”

Life on the Mississippi is a joy, mostly, for the folks who live in Winona’s funky houseboat community hugging the shore of Latsch Island in the middle of the Mississippi River. For decades, it has been home to roughly 100 tiny floating homes, although only a few residents stay through the winter.

Swanson has lived in his 14-by-18-foot houseboat just south of the Winona bridge for 30 years. He has seen a houseboat swallowed by a fire in 10 minutes and others slammed by trees floating down river. Many houses lack running water and toilets. It’s all part of life on a houseboat in the upper Mississippi, he said, and a life he wouldn’t trade.

There’s no guide book for the type of community Swanson and his neighbors have created for themselves here. In its place is ongoing communal learning with lessons passed on from houseboat owner to houseboat owner.

Take, for instance, “popping barrels” — the ritual of forcing sealed plastic barrels under a houseboat to help it float, which Swanson said can take off a finger or a foot if you’re not careful. Swanson said the process is often a group effort among people who share a passion.

Long before he came to Latsch Island, Swanson was biking and backpacking around the country, writing and observing birds. He said living here has been a perfect fit. “I liked to live simply as it was, and this was a real opportunity to spend less money and have more freedom. I get to live in the middle of habitat here.”

Long-time resident Chris Parnell, a weaver, said living on Latsch Island was never part of his plan. It all started when he came down from Minneapolis to visit a friend one weekend.

“They happened to have a boathouse, I did some work for them and they got low on capital and they said ‘would you trade?’ I said ‘What? Are you kidding? Absolutely,’” Parnell said. “Now I’ve been here 32 years and I’m wondering what went wrong.”

Swanson said that if there’s a common reason people choose to live in a houseboat here, it’s affordability.

Barbi Bell moved to the island in the 1980s with her son, Jonah, and bought a houseboat for just $5,000. She said raising Jonah on the river was magical. He and his friends roamed the island in the summer, and Jonah bragged that he could swim under his bedroom.

One winter memory stands out in her mind. The community connected two skating rinks on the icy river by a curvy path. They planted discarded Christmas trees in the snow to outline the trail, which extended the length of Latsch Island.

“We would skate from one skating rink to another in this Christmas tree line,” Bell said. “It was so much fun. We really had a lot of fun.”

Eventually, Bell moved back to town. But she still owns her houseboat and still uses it as an art studio. And the memories haven’t faded of those first days on the water

“I still remember coming down at night,” she said, “and going out on the deck and looking up and thinking ‘Wow we have a house. We have a home.’”

Dose of spring in store for southern Minnesota