Sentencing for Mary Livia Johnson, 68, is scheduled for April 6. 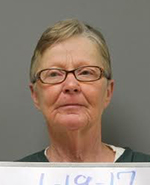 Court documents state Johnson was charged after Albert Lea officers responded to a 911 call regarding a female with a knife. After officers announced their presence, Johnson reportedly came around the corner with an 8-inch butcher knife.

After following officer instructions to drop the knife, Johnson allegedly told them that someone who was known to her had made suicidal comments and she was attempting to give him the knife for him to use.

The alleged victim stated they had been in a fight and were calling each other names. He alleged Johnson went into the kitchen and grabbed a knife.

Court documents state he told officers he placed the phone down while calling 911 so he had both hands free to deal with Johnson and the knife.

The alleged victim was reportedly bleeding from a cut on the left side of his nose. He stated Johnson cut him when she grabbed his face.

Johnson was initially charged with second-degree assault, but that charge was dismissed.