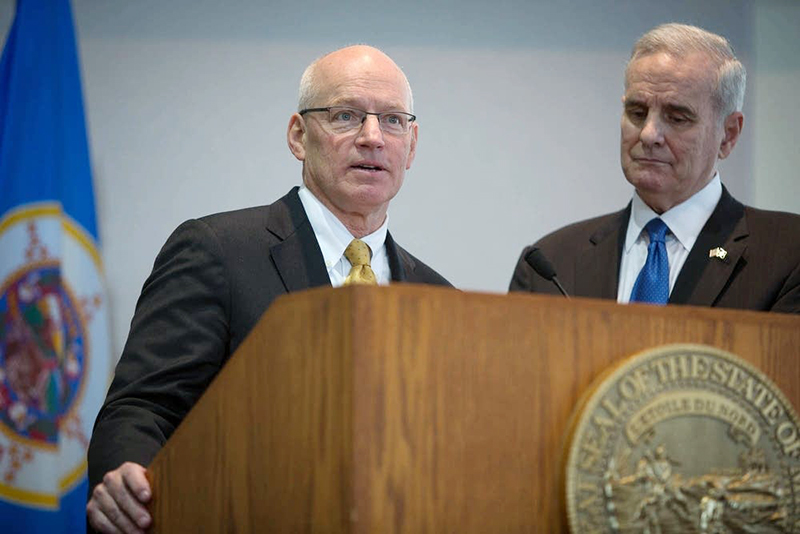 Gov. Mark Dayton's finance chief Myron Frans, left, is asked almost daily what his team is doing to plan for the potential reduction of federal money that is used to support state-managed programs. - Jennifer Simonson/MPR News 2013

Minnesota gets more than $11.5 billion a year from the federal government to spend on things like health care, road construction, policing and education.

No one expects all of that to disappear, but state leaders are bracing for slimmer allowances as President Trump and a Republican Congress seek to trim spending and rework the Affordable Care Act.

“I think we should be planning for what we are going to do when all that money is sucked out of Minnesota’s economy by the Congress and the president,” she said. “This is like a boulder rolling downhill toward us and we’re just having our picnic in the sand thinking things are the same as they’ve always been, and they’re not.”

Almost daily, Gov. Mark Dayton’s finance chief, Myron Frans, is asked what his team is doing to plan for the potential reduction of federal money that is used to support state-managed programs. He usually answers with a question mark of his own, as he did Monday before the House Ways and Means Committee.

“The difficulty and the questions we have to wrestle with is: What changes are going to occur and when?” Frans said.

Here’s why that matters: Minnesota is one of 20 states that sets a budget every two years. That involves a bit of educated, long-range guessing about how the economy will perform, how many tax dollars will flow in and what the demand will be for public services.

So even if Washington doesn’t turn on a dime, a slowdown in federal dollars could put the state in a bind before the budget cycle ends in June 2019.

“There may be changes that require us to get back together if there are big significant changes after the session is over,” Frans said in an interview last week

“I expect that next year, or who knows, maybe in a special session this fall, we might have to deal with those things,” Knoblach said. “But I don’t think we can predict what they are, and I think it’s thus hard to deal with them now.”

The uncertainty is “just another thing that governors and legislators are dealing with right now,” said Brian Sigritz, director of state fiscal studies for the National Association of State Budget Officers, a group that keeps state treasurers and finance commissioners abreast of federal activity.

“They’ve already been dealing with slow economic growth,” he said of those state executives. We’ve seen slow revenue growth in a number of states, which leads to constrained spending. Now this fiscal uncertainty is on top of some of the other fiscal issues they’ve been dealing with.”

Trump has yet to present a budget to Congress nor has a date been set for him to make a formal proposal. Congressional Republicans have signaled that states can expect to see more of the federal money in block grants rather than require specific actions to access funds.

Nowhere is the uncertainty greater than in the area of health care. The Affordable Care Act, also known as Obamacare, is in the crosshairs. It’s unclear when a promised repeal will happen and what a replacement will look like.

The federal law and its accompanying dollars have offset care costs for more than 300,000 people on Minnesota’s subsidized health programs, according to the state’s Human Services agency.

There’s more than $1.5 billion per year on the line for a Medicaid expansion Minnesota did when the health law kicked in. Another $430 million or more per year could be at risk tied to possible MinnesotaCare rollbacks. Senate Finance Committee Chair Julie Rosen said she’ll be treading lightly when it comes time to assemble that chamber’s budget.

“I think we’re going to be very cautious about what we do going forward because there is a certain amount of uncertainty,” said Rosen, R-Vernon Center.

Rosen said proposals that don’t require ongoing spending will rise to the top.

“We do have some needs that maybe one-time could handle with the surplus but we can’t grow the budget as it has been growing,” she said.