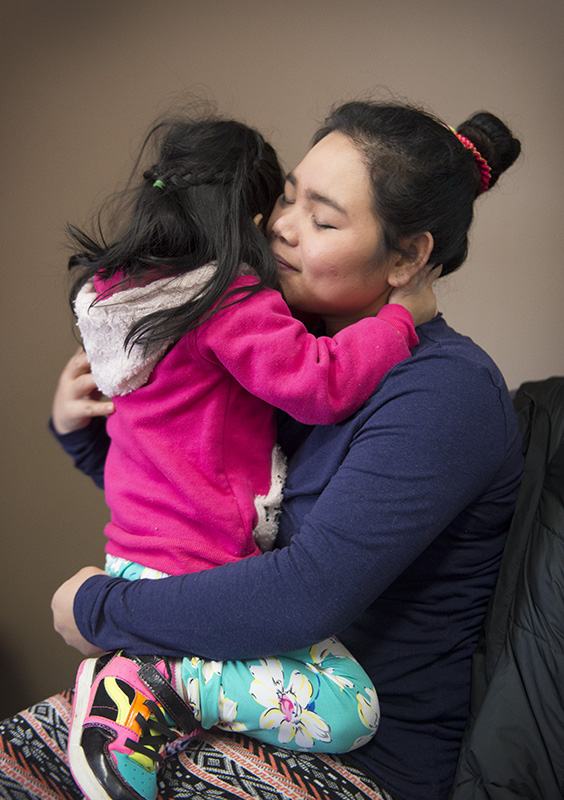 Mutha Khe holds her daughter, Dahlie. Khe, originally from Thailand, obtained her United States citizenship on June 2, 2015, after coming to the U.S. as a refugee on Feb. 27, 2008. - Colleen Harrison/Albert Lea Tribune

Much has changed for Albert Lea resident Mutha Khe in the last nine years.

She said she had a family member who already lived here, and it was here that she met her husband, Daw Han, who had lived in the same refugee camp in Thailand. She said they had lived in different parts of the camp and had not met each other before coming to Albert Lea.

Khe said she learned how to speak English with the help of Albert Lea’s Adult Basic Education program in the years since coming to the city. When she first arrived, she only knew how to say “hi” in English.

She started working toward the goal of citizen- ship in September 2014. Khe said it took her about nine months to achieve this goal.

She wanted to become a citizen so she could have what she described as “a new life.” 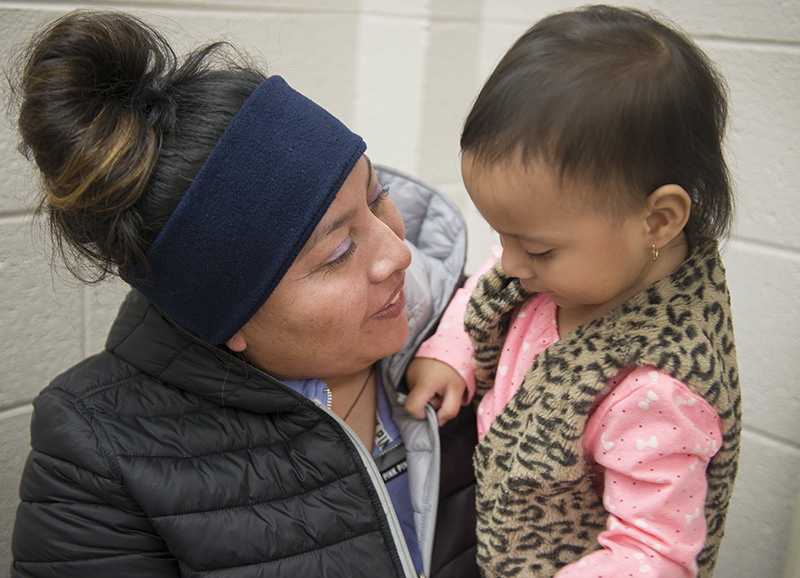 Flor Turrubiartes, pictured with her 2-year-old daughter, has passed the test and requirements for United States citizenship and is awaiting the ceremony for it to be official. She is originally from Mexico. – Colleen Harrison/Albert Lea Tribune

“Living as a refugee is hard,” Khe said. “You have to run every night. You have to be afraid of going outside. Here they give everybody a chance.”

She said was excited by the bene ts of being a citi- zen of the United States, in- cluding the opportunity to make her own choices and do as she pleases.

Tocompletehercitizen- ship, she said she had to ll out a form with information about her background and have her picture and nger- prints taken. She also had to take a test in English and go through an interview process.

“At rst was panic,” she said. “I was afraid I wouldn’t pass.

“The day I went there, I was so scared when they called me. The lady who interviewed me was very nice. They asked me yes or no questions, ‘Have you ever been jailed? Have you ever been outside the United States?’”

The civics test is given orally, and she had to answer six out of 10 questions right. There were additional open- ended questions as well, of which she had to write her responses.

After passing these steps, she said she received a letter notifying her of her ceremony to of cially become a citizen at the civic center in Rochester.

She, her uncle, her aunt and her niece all become citizens together at the ceremony, which includ- ed singing the national anthem and listening to a speaker.

“I’m very happy that I have reached this point. I love this country.

“They talk about this country — how to live a life,” she said. “They wel- come us to become a citizen, to do a good job, to serve.”

They raised their right hand and pledged to tell the truth and be true to the country. At the end, of cials came and collected their green cards and granted them citizenship.

“To become a citizen, I was excited,” Khe said. “Ithinkwheneverwego to other country, we have more chance.”

Now that she has achieved her goal, she said she hopes she can help her husband achieve his own citizenship.

He works at Albert Lea Select Foods and has struggled more with the language barrier.

“Most of the people, they want to become citizen,” she said. “They like to live here. It’s a better life, better future as long as you work hard, obey the law.”

‘I wanted to do this for my kids’

Flor Turrubiartes has lived in Albert Lea for 14 years, but her family has had contact with the United States for much longer.

She said as one of eight children, she lived in Que- retaro, Mexico.

Her father was the rst member of the family to come to the United States in 1980. He got a permit to work in the country, and then after that began look- ing into how he could bring his family here.

He worked in various places, including Flori- da, California and then Minnesota.

“I remember he was

always working here,” Tur- rubiartes said. “I remember when I was little in Mexico, my dad would send letters to my mom.”

When she was 21, Tur- rubiartes said she got her passport, visa and resident card to come to the United States.

She had to renew this paperwork after 10 years and then decided to start working on her citizenship.

“It’s very important to get my citizenship because we have more opportuni- ties to be a citizen in this country,” she said, refer- ring to things such as a passport, scholarships and other bene ts.

Turrubiartes, now 36, is married, and she and her husband, Kleanthis Resendiz, have three chil- dren, ages 2, 8 and 14, who were all born in the United States.

She has passed the re- quirements to obtain her citizenship and as of press time was awaiting word on when her ceremony will be to make it of cial.

She said she started working on her citizenship last April and passed the tests in November.

Though she is now close to becoming a U.S. citizen, she said her parents are back in Mexico.

Turrubiartes said it was not as hard as she anticipat- ed it would be to pass the tests. She studied a list of 100 questions that the civics test can be based on.

Though she wanted to vote in last November’s election, she said she looks forward to voting next time.

“I’m very happy that I have reached this point,” she said. “I love this country. Now U.S. is my country.”

What does the Constitution do?

What is one right or freedom from the First Amendment?

How many U.S. senators are there?

What did Susan B. Anthony do?

Who was President during World War I?

A.L. women ‘save and rescue’ furniture