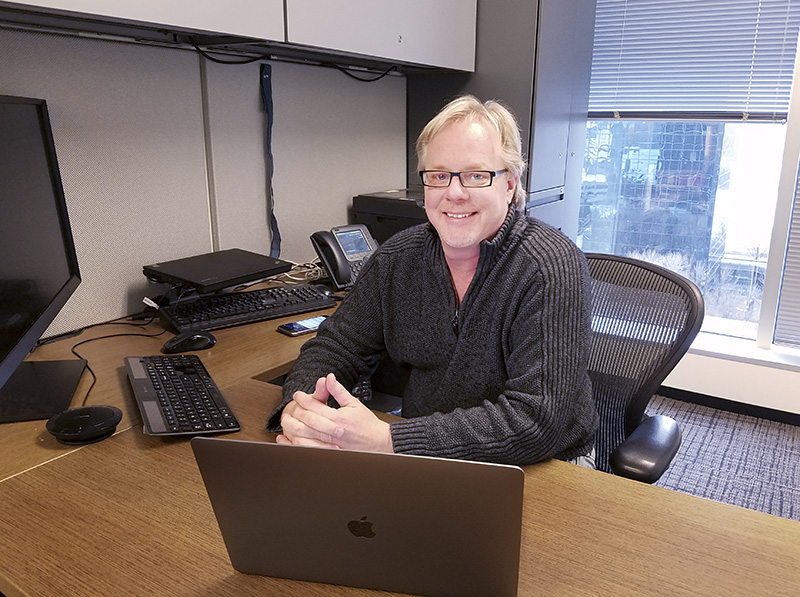 Douglas Olson grew up in Albert Lea, graduated from Albert Lea High School and was the drummer in the band Blynd Tyger. He now works in the comuter and technology industry out of the Cities. - Dori Etheridge/For the Albert Lea Tribune

Douglas Olson grew up in Albert Lea, graduated from Albert Lea High School and was the drummer in the band Blynd Tyger. After high school, Olson went on tour with Blynd Tyger for two years.

After experimenting with music he decided to explore other options and got a job managing a Little Caesar’s Pizza in Brooklyn Park, but would spend his off time with a friend, watching him work on spreadsheets. That was when Olson said he fell in love with computers.

He said the personal computer technology was new and growing, and seeing what could be done with a spread sheet had him hooked.

He proceeded to find out what was available in computer-related classes at colleges in southern Minnesota.

The Albert Lea Technical Institute, which is now known as Riverland Community College, had an accounting program with computer emphasis. While there he had a computer instructor by the name of Butch Harves.

“Butch Harves was a good friend and a mentor. By my second year I was teaching a night class in beginning programming, and I wouldn’t be where I am today had I not met him when I did,” Olson said.

After graduating in 1988, Olson began his professional journey with computers.

He was hired to take care of all the computers at Streater in Albert Lea. From there he worked for Taylor Corporation in Mankato, which is owned by Glen Taylor, who is also the majority owner of the Minnesota Timberwolves.

Olson began at Taylor Corporation  by automating things that had previously been done manually.

“Software developers solve problems,” Olson said. “I have been lucky enough to be a visionary and a developer in many industries.”

Olson then worked for a consulting company, Born Information Service Group, in Minneapolis. There he developed the skills to identify business problems quickly and solve them via technology in a short time.

Eventually, Olson started his own consulting company and used his company as an incubator for consultants who wanted to start their own company. He saw what was happening in the marketplace at the time, and during the boom knew that talented software developers would want to go out on their own but might not know the process. That formulated to a product business, Palm Technologies, in 1999.

Olson designed a tool to write software for the palm pilot.

“It went really well until 9/11, and (research and development) went down pretty quickly and I went back to consulting.”

Around this time, Olson said he began to feel the need for a home, so he mentioned that to a friend who worked for Benfield — now Aon Benfield. Olson ended up speaking to the manager and was hired as a developer.

That’s where he has been ever since.

His official title is managing director of product development and applied research. Everyone on his team gets to solve problems, allowing the team to grow. After a year he was promoted to a leadership position, and through time Olson was able to expand the group into a global group — to Ukraine, India, London, Singapore and Chicago.

“I’m a technology evangelist,” Olson said. “I love to talk to business analyst teams about their technology.”

“To have a piece of software that is used as a verb in a sentence, as in ‘I’m going to Google that,” he said.

Olson’s advice have for others with a dream that has not yet been realized comes in three different steps: find a way to make it happen, follow your dreams and don’t be afraid to fail.

So what does a successful businessman in global technology do to relax?

“I have a bucket list and I keep working on it,” Olson said.

One of his other hobbies is producing other musicians. Olson has produced two CDs and is the business manager for a country singer from Albert Lea named Angel Val. They went to Nashville and worked with some other musicians, he said.

Olson and Val met after Olson put together a sort of 30-year reunion of Blynd Tyger and his new band. His brother knew Val and said she had a beautiful voice, so he got her to open for them.

Just before the Nashville endeavor happened about a year ago, social media showed Olson a friend suggestion for Rhonda Sorensen — a woman he had been on one date with 25 years ago. He sent that request and she accepted.

They began dating in June 2016, and he proposed to her during Christmas. She said yes.

How does Olson feel about growing up in Albert Lea?

“I am very happy I grew up in Albert Lea,” he said. “I love the small town feel of Albert Lea. The beauty of this city cosmetically speaking, the lake and family.”