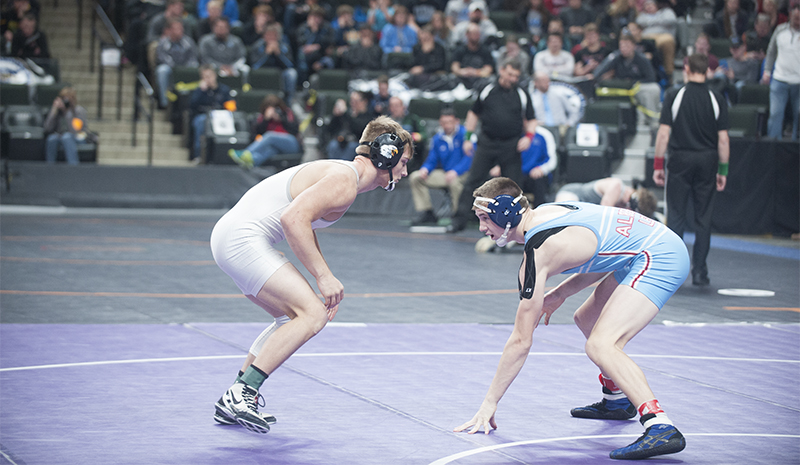 Zach Glazier has had a wrestling career most would hope for, and he still has two years left.

The sophomore at Albert Lea High School is coming off his third straight state tournament appearance earlier this month and came away with second place — his best finish at the tournament.

Wrestling has been a way of life for Glazier.

“I was pretty much born into it,” he said. “I was just a few days old and I was at the state wrestling tournament.”

Glazier’s dad, Dan, helped introduce him to the sport.

“My dad wrestled pretty much his whole life,” Glazier said. “He wrestled in college at St. Cloud State University and has been a coach and in my corner for most, if not all, of my matches.”

His passion for wrestling started at the age of 4, when he would go to wrestling practices. He said he picked up the sport naturally and hasn’t stopped loving it since.

“I didn’t get competitive until about kindergarten,” Glazier said. “But I started having success right away and haven’t really stopped.”

Glazier was good enough that he saw his first varsity action as a seventh-grader. While it was only one match, it helped him launch a career that just wrapped up its third season with two more to go.

This past season, he wrestled at 152 pounds and found himself in the state title match March 4. While he didn’t come away with a title, he proved to himself that he belongs with the best wrestlers in the 152-pound weight class.

“A lot of people didn’t know, but I was wrestling with a separated AC joint and a fracture on one of my growth plates in my shoulder,” Glazier said. “It was painful to warm up, but once the adrenaline got going, I didn’t notice it. But it held me back some.”

The injury happened in the opening match at the state tournament, and Glazier would go on to win three matches before falling in the championship.

“The toughest part was keeping it (shoulder) loose,” Glazier said.

While losing a championship match can be discouraging to some, Glazier sees it as a chance to grow.

“I was in the semifinals as a freshman and I lost that one,” Glazier said. “This year, I won and made it to the finals, but lost. I definitely improved from this year to last year, and I’m going to work hard — once my shoulder is fixed — to be prepared for next year.”

Glazier said he will be out around six weeks while he heals.

“The most frustrating part about it is that I won’t be able to lift weights or do much else,” Glazier said. “But once I’m healed I’ll get back into working out and ready to go.”

When he has free time, which isn’t often, Glazier likes to hunt deer and turkey and fish with his dad and brother, Cole, and he loves math in school.

But his comfort zone is on the mat, even if he isn’t wrestling.

“My favorite sport to watch is wrestling,” Glazier said with a smile. “We had the Big Ten tournament recorded this past weekend, so my family and I spent a lot of Sunday watching it.”

Wrestling in college is the goal for Glazier. He has been in touch with some Big Ten schools, which he said would be a dream come true.

“That would be awesome,” Glazier said. “I have never thought about not wrestling in college. It is something I’ve always wanted to do.”

However, Glazier has unfinished business left on the high school mat.

“Albert Lea wrestling has meant a lot to me,” he said. “I couldn’t imagine wrestling at a school were the program wasn’t as good. Albert Lea has a great wrestling history and I want to add to it.”

Interesting fact: He was born with three toes on his right foot.