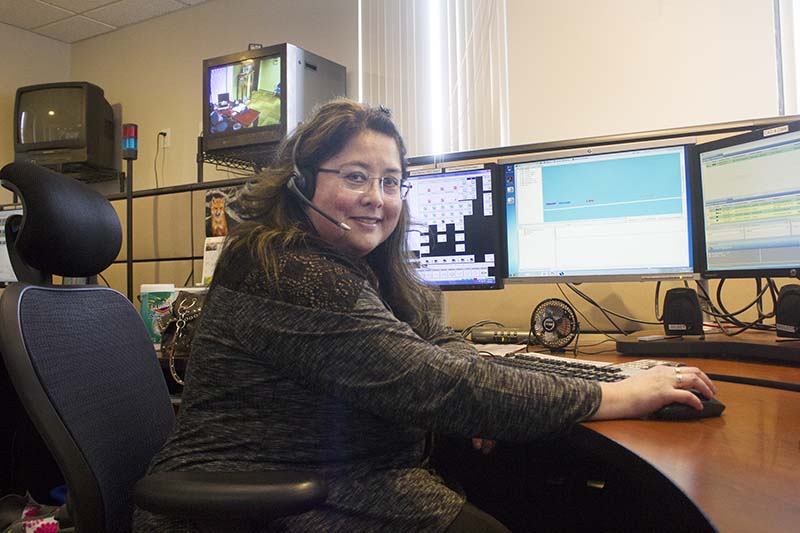 Lisa DeRaad has worked for nearly 25 years as a 911 operator at Rice Steele Dispatch Center. She was recognized last week for assisting first responders on the scene of a fatal shooting in Northfield. — Sam Wilmes/Albert Lea Tribune

OWATONNA — An Albert Lea woman was recognized last week for assisting first responders last year during a fatal shooting in Northfield. The recognition she received is a symbol of the work she has done to help people over nearly 25 years.

Lisa DeRaad, 911 operator at Rice and Steele 911 Center in Owatonna, was given the Making a Difference Award Wednesday by the Association of Public Safety Communications Officials in Alexandria.

The award was given based on her work in helping first responders during a fatal shooting Aug. 14, 2016, in Northfield. DeRaad’s line of questioning during a phone call while the incident unfolded assisted in the investigation of the shooting. She was also recognized for remaining calm during the phone call and keeping the caller and first responders safe.

“We do this day to day, and it’s a day in and day out thing. You do your job, but you don’t expect to be recognized for doing what you do every day. You are trained to do it, and you do it. It was pretty awesome to get the award.”

To DeRaad, co-workers, administration, support she receives and the differences of each day are her favorite aspects of the job. She enjoys helping people every day by providing assistance, and she wants each customer to be thankful that she was able to help them well and efficiently.

DeRaad’s duties have changed during her 24 years on the job. Prior to Rice and Steele counties combining dispatch services, she was also a jailor.

DeRaad, 48, is an Albert Lea High School graduate. DeRaad and her husband, Trevor, have two sons. She also is a part-time employee in the finance department with the city of Albert Lea.

Jill Bondhus, 911 Center administrator, who nominated DeRaad for the award, said she appreciates the work DeRaad does.

“Lisa comes here every day to do her job,” she said. “She does her job well. She’s supportive to her co-workers. She’s somebody that they look up to every day. They confide in her. She leads by example. She’s there to help them, whether it is a new person or a person who has been here for a very long time.

“She demonstrates again and again outstanding effort, attention to her duties. She’s a perfect role model (and) mentor to her peers.”

The Making a Difference Award is meant to recognize an unforeseen or unusually challenging situation handled outside of normal assignment of duties in which additional responsibilities handled were significant to making a difference in the event.