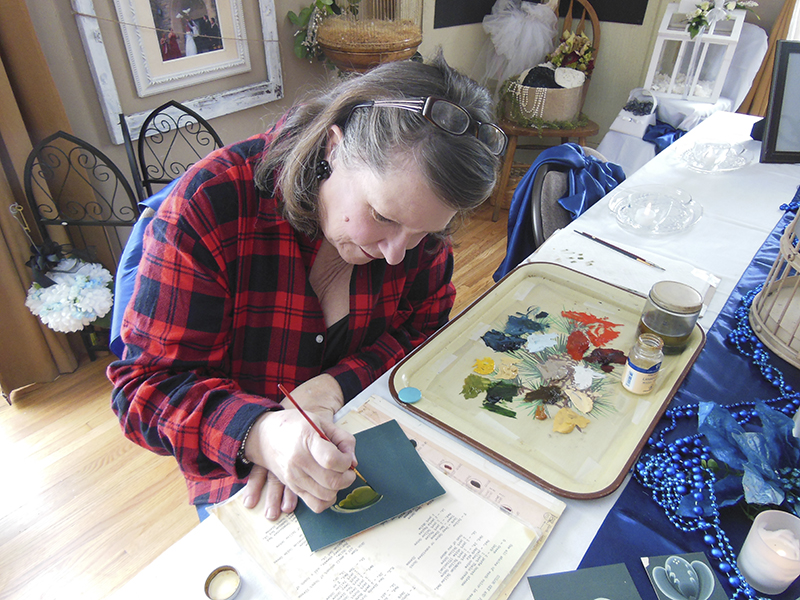 Jane Haukoos took her first class on rosemaling in 1976 at the Folk Art School in the Vesterheim Norwegian-American Museum and Heritage Center in Decorah, Iowa. - Ann Austin/For the Albert Lea Tribune

Form of painting originated in the mid-1700s

ALDEN — Art is a natural expression of a life lived fully for Jane Haukoos.

Sitting in her studio, which happens to be her mother’s old home, Haukoos listens to pop music blaring while she practices the ancient art of rosemaling and runs several other home-based businesses.

“I’m into too many things,” she said.

Though she has many talents, rosemaling is her oldest love. Rosemaling is a form of painting that originated in Norway in the mid-1700s. Rural people would learn the art form and travel the countryside painting barns and furnishings to make a living or in trade for room and board.

Rosemaling works in layers — starting with a base color and adding intentional shades of light and dark complementary colors until a nearly three-dimensional image appears.

Haukoos’s first encounter with rosemaling was as a young married woman. She and her husband, Steve, received a loveseat from their pastor, who happened to be known for his rosemaling. She asked him to paint the loveseat — but he suggested she do it herself since such a project would likely take him four years. 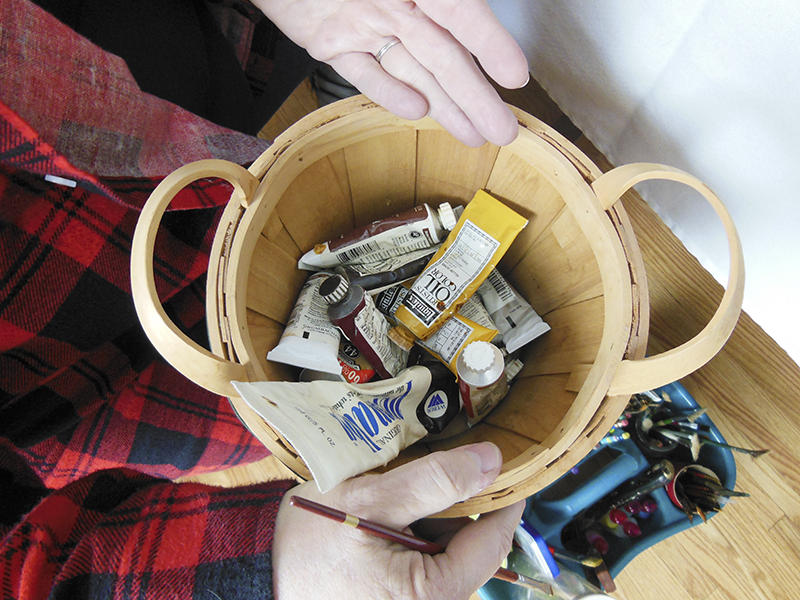 Her first class was in 1976 at Folk Art School in the Vesterheim Norwegian-American Museum and Heritage Center in Decorah, Iowa.

The classes were intense, all day and somewhat exhausting. Students would break for dinner and treat themselves to drinks, then return to paint again.

“We always felt like we could paint better after a glass of wine,” she said.

The practice takes a steady hand, attention to detail and endurance. It could take all day to finish even a small piece of work, and the artist often suffers some stiffness or other physical pain.

The result is what makes the work satisfying — they are truly beautiful works of art.

She paints with oil paints, which are the traditional medium to use. Oils are preferred over acrylic paints for their capacity to blend and mix colors while the art is being created. Oil paint isn’t cheap — a small tube costs approximately $8, but it can last quite a while, especially if placed in a cold space, such as a freezer.

She also prefers to paint on wood. Artists have painted on ceramic and tin, but those materials are too slippery to have as much control.

Haukoos has created works on commission, anything from small decorative items to borders on walls. However, she usually paints for gifts or as part of a class because the cost of creating items is pricier than people expect.

A small wooden plate could cost as much as $50 for the time involved alone.

“It’s so time consuming … you really need to have a passion for it,” she said. 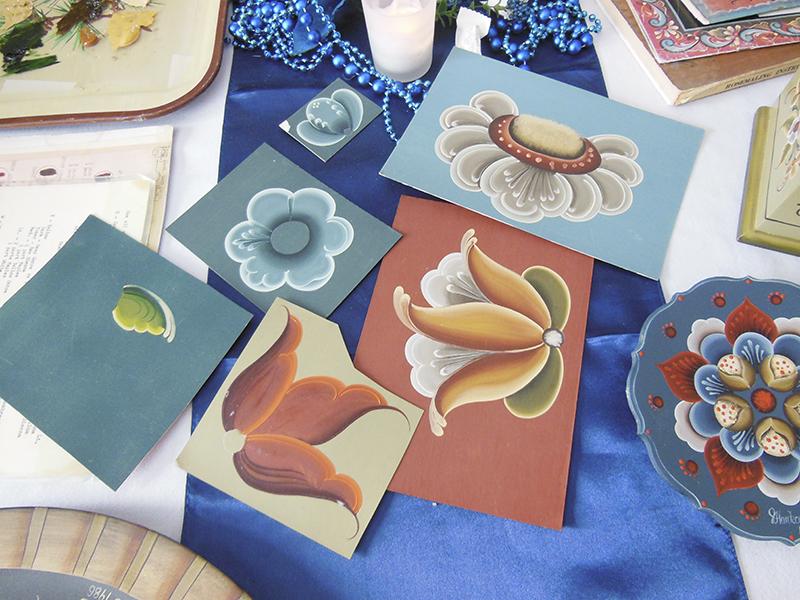 There are many different forms of rosemaling, depending on where in Norway the style took root. Some styles focus on geometric shapes and are asymmetrical, while others are floral or have baroque elements or scrollwork and are symmetrical.

Haukoos specializes in the Rogaland style, which focuses on floral elements and includes different images of tulips, stylized roses or daisies. After she had been painting for many years, Haukoos’s husband discovered his Norwegian heritage traced back to the area where Rogaland was developed. This discovery solidified her interest in the Rogaland style.

Haukoos taught classes for many years through Community Education and at the Sons of Norway barn — but noticed that attendance dwindled as society became focused more on consumerism.

“It’s been such a throwaway society,” she said.

Recently, though, she has experienced more interest in the ancient form of artwork and is planning to offer classes at her studio.

Classes would run for approximately eight weeks with initial instruction in painting the background and mixing paints, then focusing on how to paint a leaf, followed by how to paint additional designs and other techniques to use. It takes quite some time to develop the skill — each leaf involves three to four shades of a color.

The studio is ideal for running the many other businesses she and her husband offer, such as Memories Aloft, which is their dove-releasing business; as well as her personal passion, Flowers by Jane, which provides floral designs and decorations for weddings.

She also sews and has recently made car seat covers, as well as elaborate shadowboxes on request. She said all of the activity keeps her healthy and happy.

The best way to contact Haukoos is to like her Facebook page “Memories Aloft & Flowers by Jane” or give her a call at 507-874-2668. She has a flexible schedule to accommodate her clients and can make house calls, if preferred.