Bald eagles starting to migrate back to Minnesota 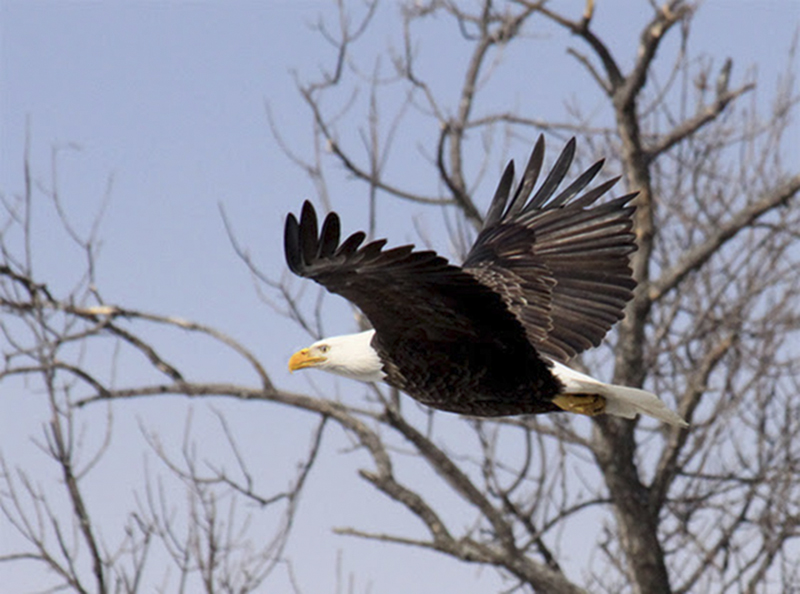 Bald eagles are migrating back to Minnesota and may be seen in large numbers across parts of the state over the next few weeks, according to the Minnesota Department of Natural Resources. - Provided

Bald eagles are migrating back to Minnesota and may be seen in large numbers across parts of the state over the next few weeks, according to the Minnesota Department of Natural Resources.

The spring eagle migration usually coincides with ice-out. A warm February melted much of the snow cover, and ice is breaking up along the rivers, said DNR regional Nongame Wildlife specialist Lisa Gelvin-Innvaer.

“Because of that, this year’s migration appears to be a couple weeks earlier, so folks in southern Minnesota will be seeing eagles soon, even with the last remnants of winter,” she said. “We’re already seeing small groups of eagles along the Minnesota River.”

Only two states, Florida and Alaska, have greater nesting populations of bald eagles than Minnesota. In 2005, researchers estimated there are more than 1,300 active nests in Minnesota.

Fall migration typically occurs as lakes and rivers freeze over, since most eagles prefer a diet of fish. Bald eagle wintering grounds ideally contain open water, ample food, limited human disturbance and protected roosting sites. As their population increases, however, some eagles have become tolerant of some disturbance, particularly traffic, choosing to nest near busy highways or in very urban habitats. To supplement their diets in winter, eagles also prey on mammals and other birds, and will often be seen on roadsides eating carrion.

Not all bald eagles migrate southward in the fall, Gelvin-Innvaer said. In many areas in Minnesota, it’s common for some eagle pairs to stay the winter, especially during milder winters and wherever there is open water.

“This year’s winter was a bit milder,” she said. “There were fewer subzero nights and not as much snow on the ground as some other years. That should have made for an easier winter for them to find food.”

Bald eagles that stay local may begin courting and nesting as early as December or January. Other bald eagles return to their breeding territories as soon as a food source is available.

“Eagles tend to vary their migration routes, so it’s hard to say exactly where the eagles are right now,” Gelvin-Innvaer said. In Minnesota, the biggest migrations tend to be along the Minnesota River corridor, the north shore of Lake Superior and around Lake Pepin in southeastern Minnesota.

The bald eagle’s recovery is a success story and an example of how they and many other wildlife species benefit directly from donations made to the Nongame Wildlife checkoff on Minnesota tax forms. For the past forty years, checkoff dollars have been used to fund research, surveys and education for more than 900 nongame wildlife species. When the checkoff began, bald eagles, peregrine falcons and trumpeter swans were almost gone from our landscape. Today, they are all thriving in Minnesota. Each dollar donated is matched by funds from the Reinvest In Minnesota Account. Donations are accepted year-round.

More information is available at www.dnr.state.mn.us/nongame/donate/index.html.

The DNR’s Nongame Wildlife Program is now streaming live video of a nesting pair of bald eagles on its website at www.mndnr.gov/eaglecam.