Memorial services for Bernice E. (Jensrud) Himmerich of New Richland will be at 2 p.m. Friday at Trinity Lutheran Church in New Richland. Visitation will be one hour before the service at the church. Interment will be at St. Olaf Cemetery followed by refreshments with family and friends. The Rev. Paul Andree will officiate. 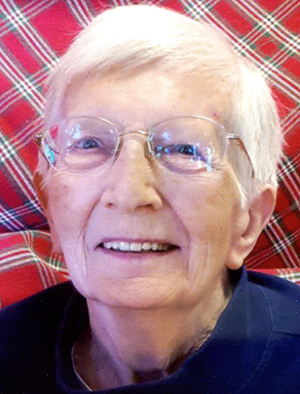 Bernice married Ervin Himmerich on July 3, 1949, in Esmond. They made their home in Valley City over the next several years where their three children were born. They moved to Thief River Falls in 1954, where they lived until 1968. From there they moved to New Richland, where they remained for the rest of their years.

In New Richland, Bernice worked as a teller at the bank, did bookkeeping for some businesses and worked in the office at Budach Implement. After their retirement, Bernice and Ervin did janitorial work for the bank for 11 years. Bernice was involved with the AFS Intercultural Exchange program and enjoyed the opportunity to host their foreign exchange student, Chaluay, from Thailand.

Bernice was active at Trinity Lutheran Church, where she served on the church council, the altar guild, taught Bible school, Sunday school and enjoyed quilting. She served on New Richland Care Center Board for 19 years. She also was very active with the American Cancer Society and sold daffodils every year at the bank for many years.

Bernice lovingly made quilts for each of her children and grandchildren — instilling a special remembrance for each of them.

She was preceded in death by her husband, Ervin, in July; son-in-law, Albert Gates; her parents; sisters Charlotte and her husband, Frank Motschenbacher, and Thelma Westrich; brother, Hilmer Jensrud and his wife, Betty; and sister-in-law, Tootie Jensrud.