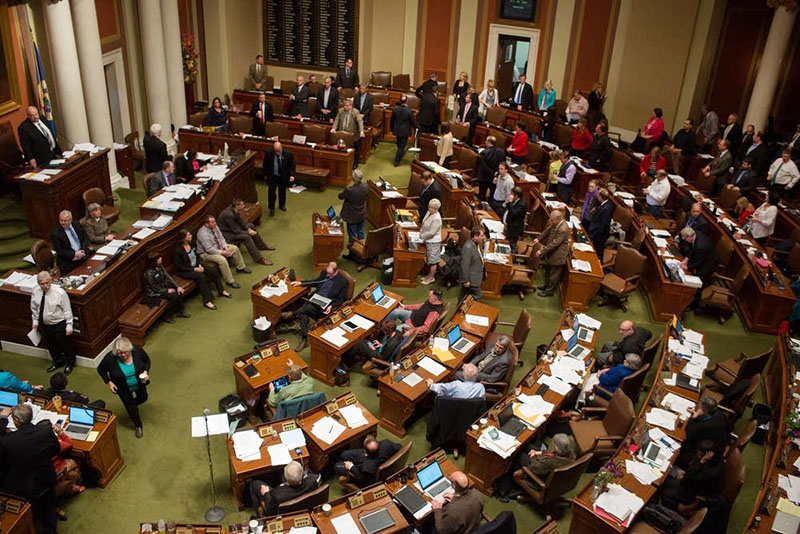 Activity on the House floor during the last day of the 2015 legislative session at the State Capitol in St. Paul. Jennifer Simonson/MPR News 2015

Minnesota lawmakers are fast-tracking a bill that would automatically set aside money for a possible pay raise without having to vote to allocate a specific amount. It anticipates a decision due by month’s end by a new independent commission created to set lawmaker salaries.

As legislation goes, this is pretty simple. A paragraph long, the bill authorizes a standing appropriation to pay any lawmaker salaries. In essence, that’s an automatic withdrawal from Minnesota’s checking account year after year.

One thing is clear: Even though lawmakers no longer have a direct say in their pay, the political sensitivity around the issue hasn’t gone away.

The bill’s sponsor, Rep. Bob Gunther, R-Fairmont, said it merely carries out what voters wanted when they approved a constitutional amendment last fall to establish a salary council.

The Legislative Salary Council that sprouted from the constitutional amendment has met four times so far. The 16-person citizens panel — divided equally between Democrats and Republicans — must issue its binding decision by March 31st.

Sitting legislators are barred by law from interacting with commission members during the salary deliberations.

So, it’s turning into a race between the council and the Legislature.

Gunther’s bill zoomed through two House committees this week, taking a combined four minutes and 47 seconds of consideration before approval. There were zero questions from legislators. A full House vote is scheduled for Monday.

“Otherwise we would be too late,” Gunther said. “What we’re doing is, saying is we’re going to abide by the compensation council’s edict regardless of whether it’s up or down or the same. In order to do that, we have to have this bill passed before their recommendation is brought forward.”

The state’s 201 legislators earn $31,140 a year now, plus various expense allowances. For every $5,000 added to that base pay, it would mean $1 million a year more in taxpayer dollars toward lawmaker salaries. Base pay hasn’t risen since 1999 although per diem allowances have gone up.

The bill would prevent lawmakers from having to take a vote on a precise appropriation to cover any raise — the type of vote ripe to reappear as campaign-season fodder.

Minnesota Management and Budget Commissioner Myron Frans said the setup is unusual. He said he would advise Gov. Mark Dayton to know what the numbers are before embracing a bill like that.

Open appropriation authority like the one in the pay bill is rare: There are 87 standing appropriations out of 1,224 line items in the state’s general fund budget. Usually, it’s for things like formula-driven property tax refunds, other tax credits, emergency relief and some school aid.

And not all legislators are on board.

There were some dissenters in the pair of House committee voice votes, including from Rep. Sarah Anderson, R-Plymouth.

“Well, I’m a budget girl. I kind of like to know how my budget is going to be impacted. As the State Government Finance chair, I have to account for those numbers in my budget. And this is the problem when you have a commission making these decisions,” she said.

Anderson has little doubt that the council will recommend a raise, and she’s operating under the assumption that everybody will take it. Anderson said she personally wouldn’t decline the extra money.

“For a member to say they are going to have one individual’s pay deferred, that’s a drop in the bucket when you consider 201 lawmakers altogether,” Anderson said.

She makes clear though that she opposes a raise because those dollars compete with money for schools, veterans’ programs, tax cuts and more.

Sen. Bill Ingebrigtsen, R-Alexandria, is sponsoring the Senate version. Like Gunther, he said it’s designed to honor the will of the 76 percent of voters who approved the constitutional amendment in November.

He’s not sure the Legislature can or should get it done before the salary panel finishes its work.

“Absolutely I want to see what the number is,” he said. “But whatever the number is, is the number they’ve came up with. Of course, that was set in the constitution in the last election.”