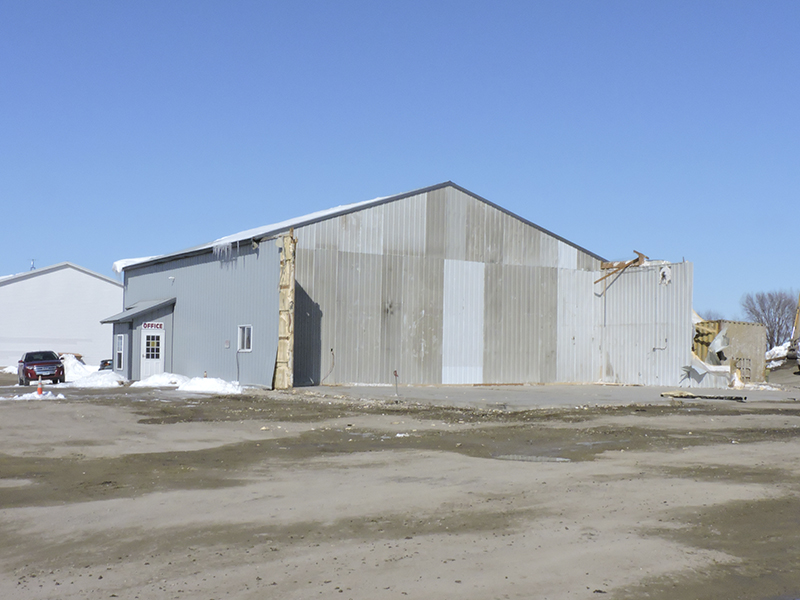 Half of Thompson Sanitation’s building was destroyed during the March 6 tornado that hit Clarks Grove. By the next evening Broskoff Structures had created a temporary wall to help secure the site. - Kelly Wassenberg/Albert Lea Tribune

CLARKS GROVE — It’s been business as usual for one Clarks Grove business despite being impacted by the March 6 tornado, according to Thompson Sanitation owner Frank Thompson.

The tornado tossed dumpsters and debris throughout the property and took out the south side of the building, yet collection trucks ran on time the very next morning.

Thompson doesn’t have an estimate on how much damage was done to the business.

“We’re still working with insurance, but we’re going to build the building back up to where it was,” Thompson said.

For now, Thompson and his crew are making do. 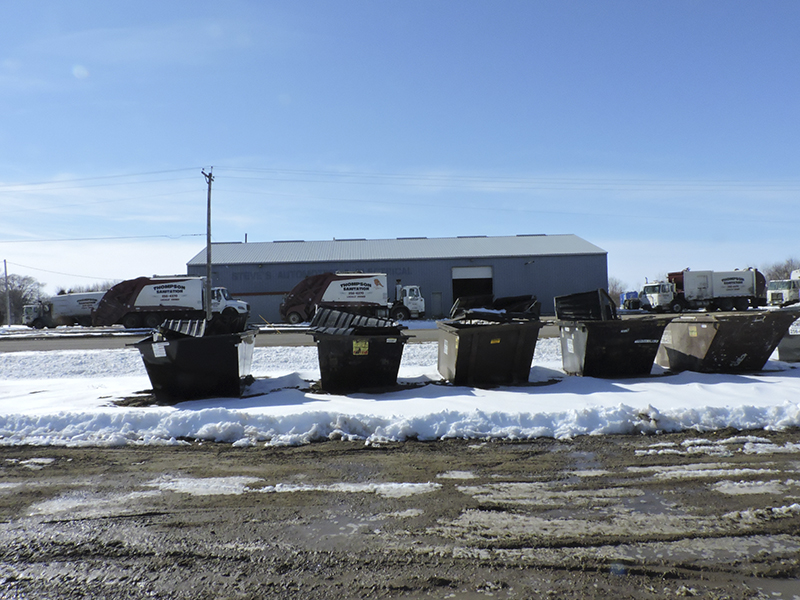 A row of damaged trash receptacles line the road between Thompson Sanitation and a building across the street which is also owned by the company. The building, which was once used for storage, is being made into a shop area until Thompson’s main facility can be rebuilt. – Kelly Wassenberg/Albert Lea Tribune

Following the storm, the facility lost power and was left open to the elements. Broskoff Structures came in and installed a temporary wall on the south side on the building the next day so the site was able to be secured. Office staff also had all the phone calls forwarded to a cell phone during this time, so the business could still take care of other customers, some of which were in the same position they were.

Along with receiving a lot of community support, fellow independent trash haulers throughout the state called Thompson to check in and see if there was something they could do to help.

“A good friend of mine from Faribault from Flom Disposal came down to help on Tuesday with one of his roll-off trucks, which was a big help because we had dumpsters that were going out for the elevator and the hog barn that was destroyed south of town.”

Roll-off trucks carry larger dumpsters typically used for building demolition and larger construction projects, so the extra help was needed to ensure Thompson could continue to meet its customer’s needs while also dealing with its own.

“I think we balanced that pretty well,” Thompson said. “I’m very impressed with my crew of guys.”

Power was restored to the building March 8, allowing the office staff to return to work while shop workers helped clean up the business’ lot. On Wednesday, the process also began to move the facility’s shop across the street to a building that is usually used for truck storage. 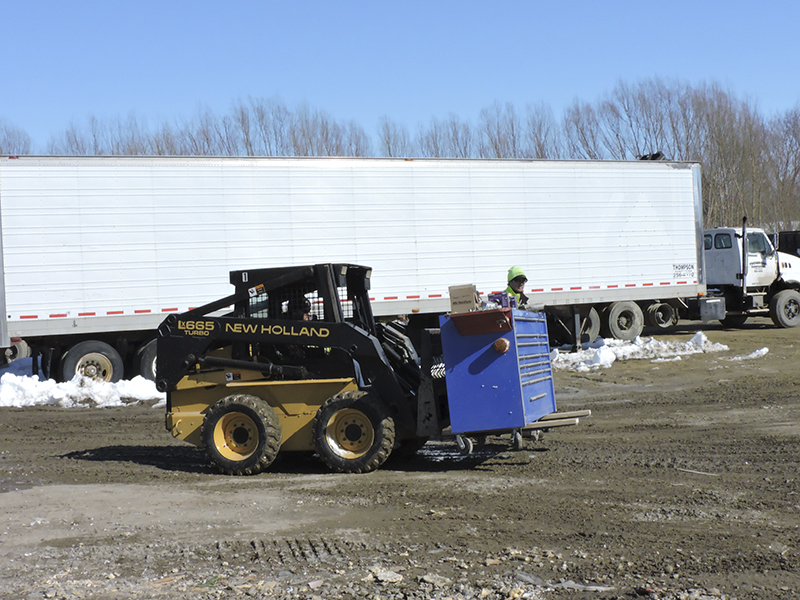 Staff at Thompson Sanitation move equipment from their main facility to one next door, where a makeshift shop will be set up. – Kelly Wassenberg/Albert Lea Tribune

“It’s not going to be as elaborate as this shop, but it will definitely get us by,” Thompson said, noting that they will still have to outsource some of the repairs because they won’t have everything they need accessible to them.

Thompson is staying positive throughout the process to rebuild.

“I feel fortunate. The damage could have been much worse,” he said.

Until he’s done working with his insurance company, Thompson said there’s not much left to do while there’s still snow on the ground.

“We’re pretty much cleaned up,” he said. “We’ve got some litter we’ll have to clean up after the snow melts, but that’s about it.”

Thompson has opened Thompson Sanitation since purchasing the business from his father in 1995. The business started in 1982, serving the communities of Geneva, Ellendale and Freeborn. The company now provides services to surrounding communities from Wells, Austin, Hope and the Iowa state border.