Craig was born Feb. 5, 1948, at Naeve Hospital in Albert Lea to parents Wesley R. and Shirley L. (Christian) Nelson. He grew up in Albert Lea and graduated from Albert Lea High School in 1966. Craig joined the United States Navy from 1966 to 1970, serving in the Vietnam War as a corpsman from May 1968 to May 1969 in the field with the Marines. Following his tour of duty, he returned to the Albert Lea area, attended Austin Junior College and had various jobs. Wanderlust drew him to California and finally to Colorado in May 1973,where he was welcomed by his aunt and uncle, Bob and Florence Christian, and family. They became his second family as he settled there. 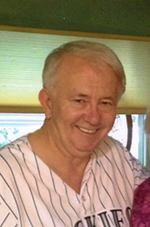 For many years, Craig worked as an engineer at Denver Merchandise Mart, retiring in 2014. While working at the mart he met the love of his life, Phyllis Franco. Craig and Phyllis were married July 4, 1997, in Lakewood. Craig was welcomed with open arms by Phyllis’s family and lovingly became grandpa and great-grandpa. The kids were his pride and joy and he could always be heard bragging about each of them.

While growing up, Craig had a passion for animals — especially dogs — and had a part-time job at a local veterinary clinic. He would bring home strays and care for them; most notable was Teddy, who became the family’s favorite dog. Craig enjoyed traveling with his beloved Phyllis to Colorado Rockies spring training. He enjoyed reading novels, watching the History Channel, playing computer games and the occasional game of chance. Craig could often be found tinkering in his garage, caring for his goldfish in the pond that he constructed or working on a building project, such as the playhouse for the great-grandchildren. He went out of his way to help the neighbors — especially with snow removal — not expecting anything in return. Craig was always available to help family or friends. He and Phyllis made trips to Minnesota to visit family and friends until declining health prevented them from traveling.

A memorial service with military honors will be at 1 p.m. Tuesday at Fort Logan National Cemetery, 3698 S. Sheridan Boulevard in Denver. Those who attend are asked to gather at Staging Area A at Fort Logan by 12:45 p.m.

In lieu of flowers, memorial contributions may be made in Craig’s name to Pancreatic Cancer Network, 1500 Rosecrans Ave., Suite 200, Manhattan Beach, CA 90266; or to the donor’s choice.

Arrangements are under the direction of Olinger Crown Hill Mortuary, Cemetery & Arboretum in Wheat Ridge, Colorado. Online condolences may be made to CrownHillFuneral.com.