Don was born  Feb. 1, 1924, to Russell and Barbara Babbitt in Conger. He attended a one-room schoolhouse in Conger until the ninth grade and then attended Albert Lea High School, from which he graduated in 1941. 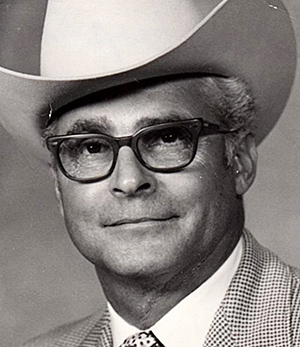 Following high school, Don joined his father at Russell C. Babbitt & Son Livestock, which led him to travel to Indiana and attend the world renowned Reppert School of Auctioneering. He graduated in 1942.

When his country called, he joined the United States Army in 1943 and served in the South Pacific during World War II. He married Kate Sonksen of Albert Lea in 1944 and together they raised three children, Bob, Nancy and Vicky.

Don and his family settled in Conger, where he worked alongside his father in the livestock and hog business. Don also owned and operated a well-known six-mule hitch for Schmidt Brewery that appeared at fairs and festivals all over the Midwest.

In 1965, following the death of his father, Don began his career as a full-time auctioneer forming Mid Continent Auctions with Roy B. Johnson of Buffalo Center, Iowa.

Despite his busy auction calendar, Don was dedicated to the success and growth of Conger and played a key role in the town becoming known as the “Biggest Little Town in Minnesota.” He served 12 years as mayor, was a volunteer fireman for the Conger Fire Department, was a partner in the Conger Elevator for several years, and actively participated in building St. Paul Lutheran Church, as well as serving on the board and various councils throughout the years.

In 1982, Don married Janis Booen Kitts of Albert Lea. Together they owned and operated Northland Auction until his retirement in 1995. Jan even jumped in and ran the lunch wagon one day when the scheduled food service didn’t show up. The tasty food became so popular, eventually it led to Don and Jan owning and operating the Conger Café until 1995.

They then sold their home in Conger, auctioned off all of their belongings and hit the road for more than seven years. Their travel adventures took them to 49 of the 50 states, plus all but one of the Canadian provinces. Don never met a stranger and him and Jan made many close friends on the road.

They finally parked the RV in Brooksville in 2001, and settled into yet another chapter of their lives. As a master storyteller, Don was always willing to share stories about his life in Conger and to entertain friends and family with his many exploits in the Army, as an auctioneer and working with livestock. He wrote an autobiography several years ago to ensure his family would always have his stories and could pass them along to their children.

Don was preceded in death by his parents; as well as his wife, Kate; sister, Donna Johnson; and daughter-in-law, Pam Babbitt.

A celebration of life will take place in Conger at a later date. Condolences may be sent to the family at 21253 Yontz Road, Lot 19, Brooksville, FL, 34601-1645 or dbabbitt@tampabay.rr.com.