Dozens gather for day of action in Albert Lea 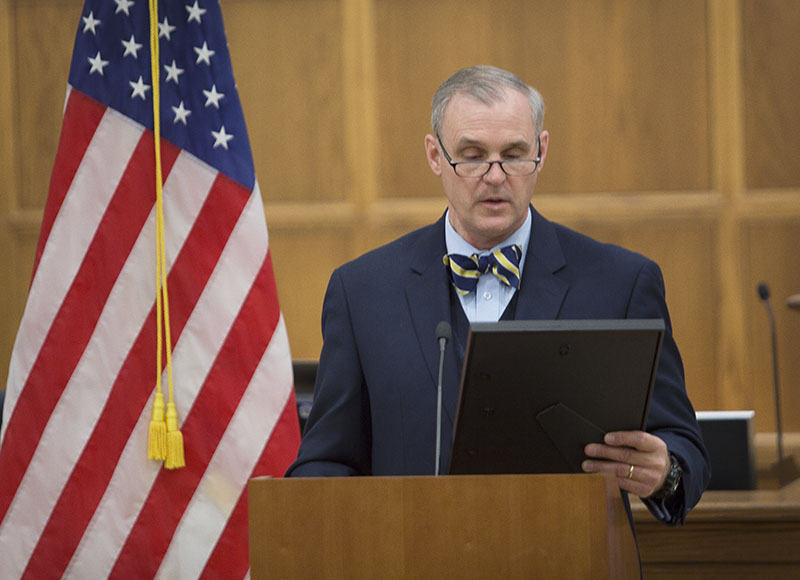 Freeborn County District Court Judge Ross Leuning reads a proclamation Tuesday declaring March 7 Action Day, or a Day to End Domestic Volence, as a part of a statewide intiative to both raise awareness about and to end domestic violence. - Colleen Harrison/Albert Lea Tribune

A Freeborn County courtroom was filled with people Tuesday afternoon all with one common goal — to end domestic violence.

As part of a statewide effort to promote “It Happens Here,” advocates from the Freeborn County Crime Victims Crisis Center and Freeborn County Domestic Violence Partnership teamed up with the Minnesota Coalition for Battered Women. The theme recognizes that domestic violence happens in every county, township and city across Minnesota to more than 65,000 people each year. It’s also meant to imply that solutions to end violence happen locally with the investment of each member of the community.

Dotti Honsey with the Crime Victims Crisis Center said that in year’s past the day of action took place in St. Paul, but that this year’s focus was on making things happen on a local scale. 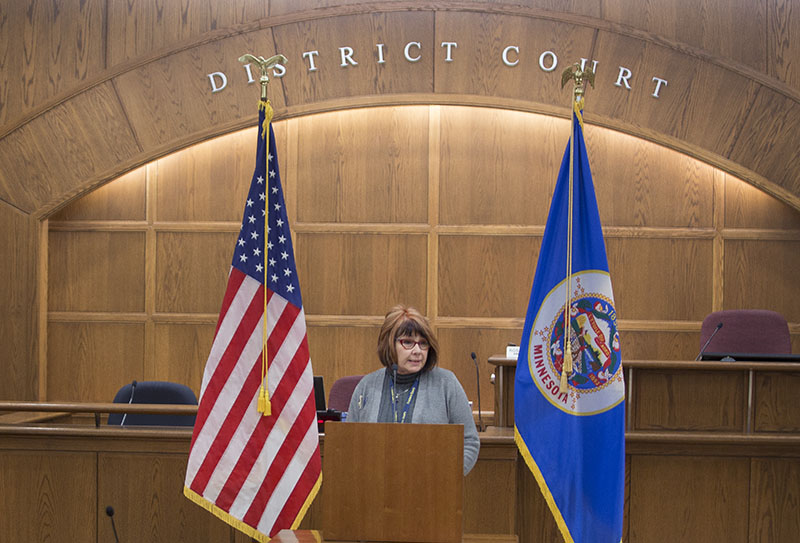 Dotti Honsey of the Freeborn County Crime Victims Crisis Center talks to those in attendance during Tuesday’s statewide day of action, “It Happens Here,” to advocate for an end to domestic violence. – Colleen Harrison/Albert Lea Tribune

“It says that domestic violence should not happen here in Albert Lea and Freeborn County,” she said.

Tanya Fure was a guest speaker during Tuesday’s day of action. She shared her own personal experience of losing her younger sister, Trisha Nelson, in a domestic violence homicide last year. Nelson, 28 at the time of her death, was a 2005 Alden-Conger High School graduate and had been with her boyfriend, Corey Perry, for six or seven years before Perry shot at her and then ran her down at a busy intersection in February 2016 in the Minneapolis suburb of Plymouth.

Fure spoke of the stigma surrounding domestic violence victims, and the common question of “Why didn’t they just leave?” She said there are too many factors and ways of keeping a victim in place, from the threat of violence to themselves or the ones they love, emotional conditioning to accept the behavior as a part of the cycle of domestic violence, and financial dependency, among a myriad of others.

The names of known victims who lost their lives to domestic violence in 2016 and so far in 2017 in Minnesota were also read off in the courtroom, and a flag was hung outside the courtroom in memory of those victims.

Andrea Mauer with the Crime Victims Crisis Center suggested everyone commit to doing something to raise awareness and put a stop to domestic violence, even if it’s just starting a conversation with three different people about the subject.

Honsey added that the Freeborn County Domestic Violence Partnership’s goal now is to work with different agencies, businesses and people locally to raise awareness. She also encouraged those interested in taking part in the cause to attend the partnership meetings, which are posted on the Crime Victims Crisis Center’s Facebook page.