A Fairmont man who allegedly led officers on a short chase Friday was charged with two felonies on Monday in Freeborn County District Court. 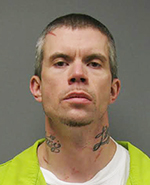 Court documents state Jensen was charged after an officer recognized him near Stevens Street, driving with a canceled driver’s license and having an arrest warrant.

Jensen reportedly accelerated from the officer and made a left turn into the parking lot of Trumble’s after the officer activated his emergency lights and siren.

Jensen’s next court appearance is scheduled for March 30.