Farm Family of the Year named 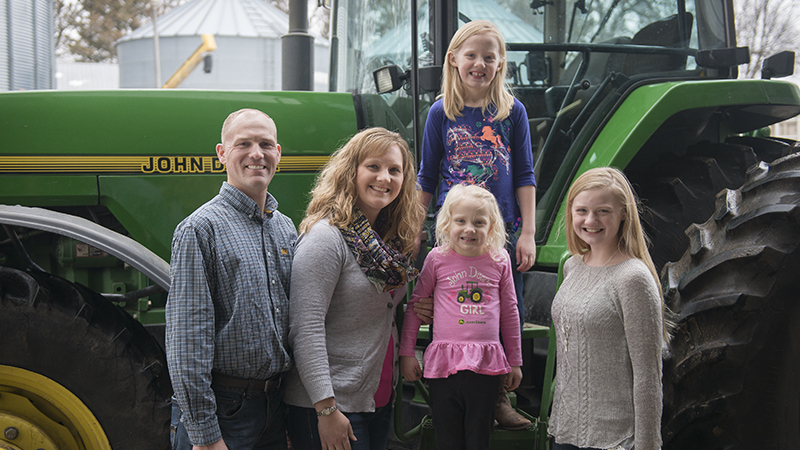 The Westrum family of Albert Lea has been named the 2017 Farm Family of the Year. - Colleen Harrison/Albert Lea Tribune

The Westrum family of Albert Lea has been selected as the 2017 Farm Family of the Year.

Tim and Jodi Westrum — along with their daughters Lara, 12; Bryn, 8; and Nora, 4 — live on about five acres of land in rural Albert Lea. The couple has been together since they were students at Glenville-Emmons High School and have been married for 17 years.

Tim and Jodi Westrum both grew up with farming as a way of life. Their parents — Ron and Linda Erickson and Dean and Sue Westrum, respectively — raised their children on farms. The Ericksons have had their farmland since 1983, and Tim Westrum’s family has been farming the same land for about 140 years.

“There’s a lot of pride in 140 years, and we want that to continue,” Tim Westrum said.

Tim Westrum grew up helping his father farm, and after he graduated from Iowa State University and Jodi Westrum graduated from University of Wisconsin-La Crosse, the couple returned to Albert Lea. Tim Westrum’s father helped him gradually rent and purchase land, and the father-son duo now farm together today in Glenville. Tim Westrum said he’d like to eventually farm with his in-laws, as well, who live down the road from them.

In addition to farming and raising their children, Tim Westrum is a sales agronomist at Shell Rock Ag and Jodi Westrum is a first-grade teacher at Southgate Elementary School in Austin.

Tim Westrum said the majority of the corn he farms with his father is sold to the Poet Biorefining plant near Glenville. The soybeans the family harvests are sold to Pioneer for seeding and to local elevators to use as livestock feed.

According to Tim Westrum, some of the most important work toward the farming business is done on a spreadsheet — tracking input costs, marketing and break-evens, among other figures. During the spring, the family’s farming business can require upwards of 80 hours of work per week.

Tim Westrum said the farming industry has changed over the years. With the introduction of more and more technology, there are fewer people involved with the business. As a result, he said local farmers have a much smaller voice in agriculture. He thinks the majority of consumers don’t understand how their food is produced or where it comes from, and he believes it is his and other farmers’ responsibility to educate others about the misconceptions or misunderstandings surrounding the industry.

Eventually Jodi Westrum said she’d like to get more involved with the family’s farming operations, but for the time being she focuses on keeping the house going and managing their children’s schedules.

The Westrums called the nomination “humbling” and “an honor,” and said they don’t know who nominated them. Tim Westrum sits on the Albert Lea-Freeborn County Chamber of Commerce Agriculture Committee, but said he was not included in the discussions or voting once the committee knew his family had been nominated.

The Westrums are involved in their church, Bear Lake Lutheran, where Jodi Westrum teaches Sunday school and helps teach a Bible school that is connected to two other area churches. Tim Westrum is the parish’s treasurer, and also sits on the Freeborn County Corn and Soybean Growers board. The Westrums’ two oldest daughters are involved in Just for Kix dance classes as well as Albert Lea Figure Skating Club.

The Westrums’ two oldest daughters are involved in the Twin Lakes 4-H and Cloverbuds clubs, with their mother being an adult leader in the club. Lara Westrum is interested in showing animals through the club, so the family will likely get into livestock at some point in the future.

The couple said farming teaches responsibility and encourages a strong work ethic, as there are never any sick days or days off during the busy farming seasons. It also teaches their children about where their food comes from. As farming is something both Jodi and Tim Westrum grew up with, it’s something they’d like their daughters to grow up appreciating, as well.

“Ag for me is my life,” Tim Westrum said. “It’s something I take a lot of pride in.”

To be nominated as the Farm Family of the Year, at least one individual in the family must be a full-time employee earning the majority of their income from farming. The individual should have farmed for at least five years, have some involvement in community organizations, have not previously been an award recipient and should be able to attend the recognition program at Farmfest in August and participate in Freeborn County Farm Family of the Year recognition in March. The Albert Lea-Freeborn County Chamber of Commerce Agriculture Committee and the University of Minnesota Extension Service sponsor the award.

The family receives the award today at the annual agriculture luncheon sponsored by the chamber.