Glazier moves on to state championship match; Aldrich, Nielsen and Cantu to wrestle for 3rd place 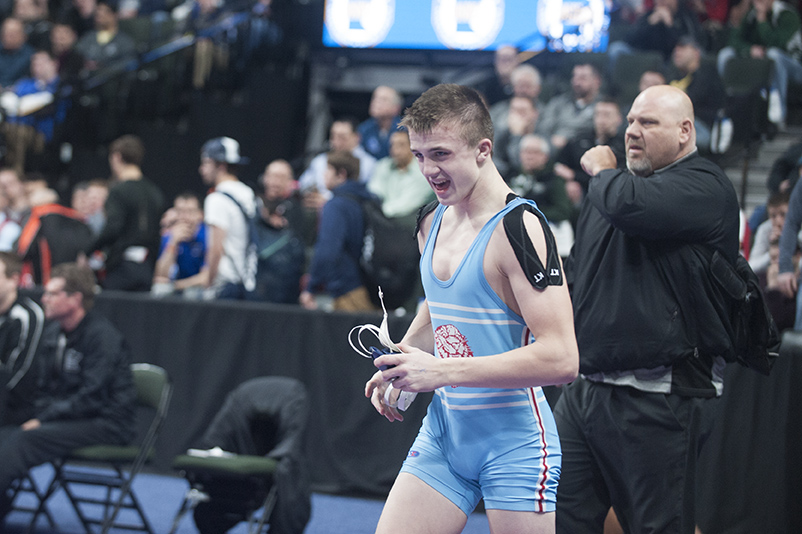 ST. PAUL  — After suffering a shoulder injury in his first match of the day on Friday, Albert Lea sophomore Zach Glazier battled through the pain and won his two matches to advance to the semifinals of the Class AA 152-pound bracket.

On Saturday morning, Glazier met Lewiston-Altura-Rushford-Peterson’s McCoy Tekautz in a match that would start with a lull and end on a high.

It took Glazier three overtimes, but he outlasted Tekautz to move on to the state championship, 7-6.

The two wrestlers spent the first period feeling out each other.

Glazier scored a point with an escape. Tekautz would even the score at 1-1 at the end of the second period. That set up a pivotal third period with a trip to the state championship on the line. 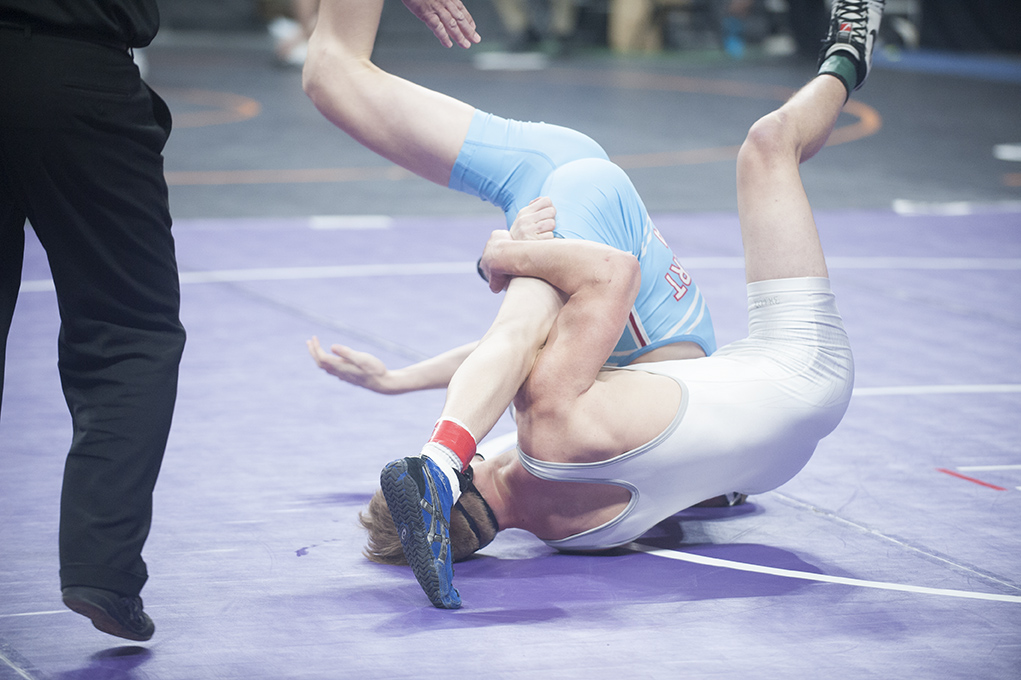 Action picked up at the end of the match. Tekautz scored a takedown and had Glazier in a bind. But with seconds remaining, Glazier was able to reverse it and nearly pinned Tekautz, but time ran out. Overtime ensued with the score tied at 3-3.

Glazier scored a point with an escape and then a two-point takedown. Tekautz would battle back with a takedown, but was still down 7-5. Glazier was called for stalling for the second time, awarding another point to Tekautz. He was unable to overcome the deficit with five seconds remaining, meaning Glazier would advance to the state championship.

In other Albert Lea action, Garrett Aldrich and Brody Nielsen lost their respective semifinal matches, but both rebounded to win their second match of the day and will wrestle for third place, along with Nic Cantu, who won both of his matches in the morning session.

Wagener scored two points with a takedown with less than a minute remaining in the first period. Wagener kept scoring as he added a point for an escape and two points for a takedown in the second period to go up 5-0. He would add two more points to start the third period, Aldrich showed some signs of life with a reversal in the final minute of the match, but Wagener countered with a reversal of his own and would go on to win the match 12-2. 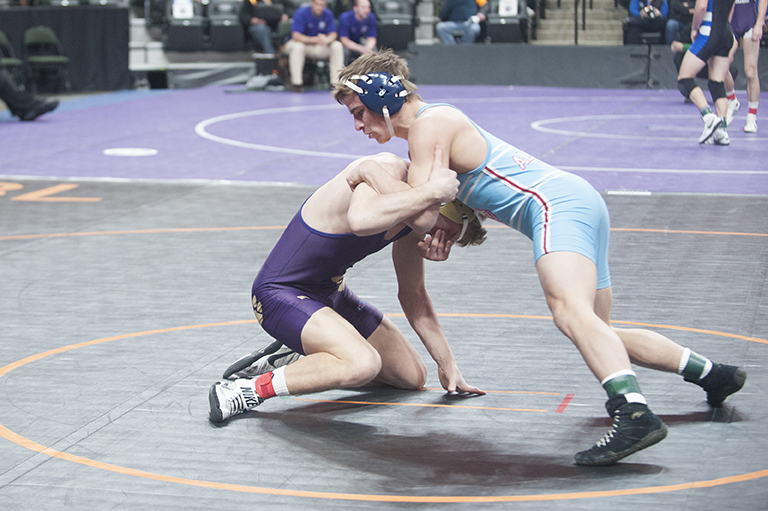 Albert Lea’s Garrett Aldrich looks to gain an advantage in his match with Laconia’s Tyler Wagener in the semifinals.

The two would wrestle the first period with neither notching a point. In the second period, Aldrich came out aggressive, but Bethea earned a point for an escape to take a 1-0 lead. Aldrich would continue to put pressure on Bethea throughout the period.

Fuenffinger would stay unbeaten as he won a hard-fought match, 7-3. He limited Nielsen’s offense early in the match and had built a 4-point lead halfway through the second period. Nielsen pulled off a nice reversal off a restart to cut the lead in half. Fuenffinger earned an escape to go up 5-2 with 45 second remaining in the second period. Nielsen earned a point thanks to an escape, but still trailed 5-3 with 1:24 left. He earned a takedown with 25 seconds left and Nielsen was unable to generate any offense late. 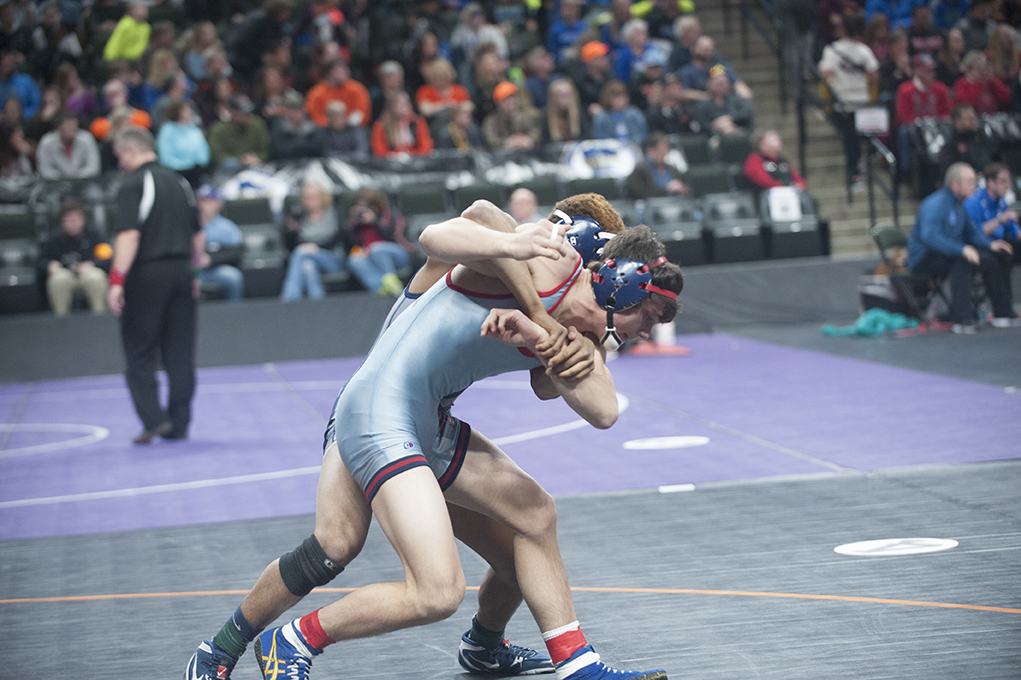 Nielsen earned a point with an escape in the second period to go up 1-0. Nielsen worked Huss in the third period. It took about 40 seconds, but he finally pinned him.

Cantu began his day with a match against Jerry Simes (Litchfield) with a chance at finishing third still in place. Cantu scored two points in the first period, then added two more with a reversal in the third period to win 4-0. 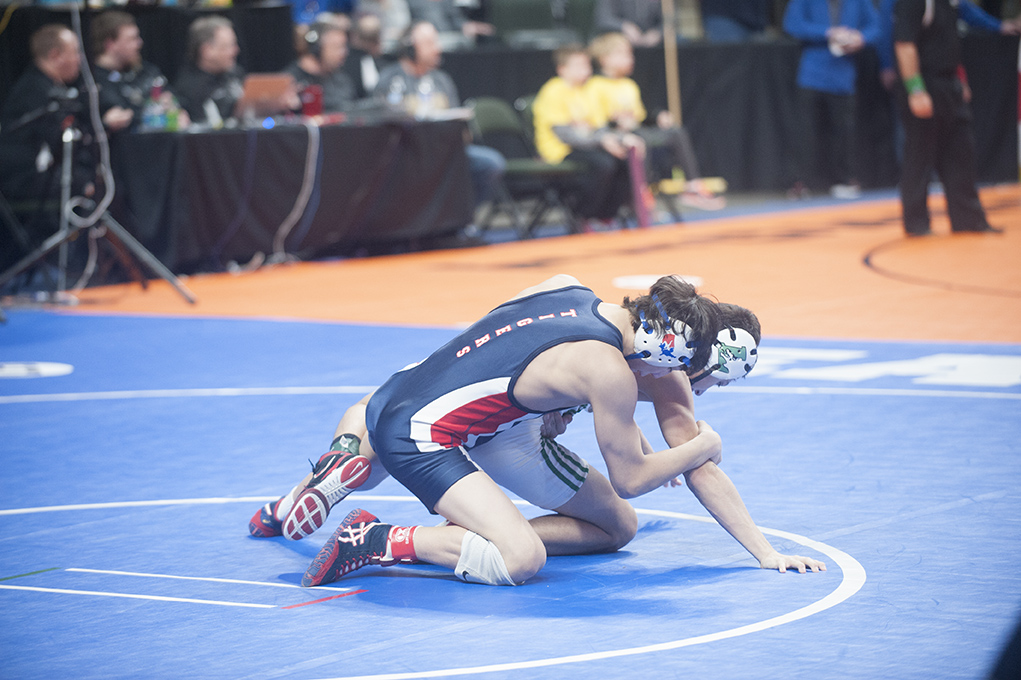 Cantu would then face Foley’s Nathan Graceau with a spot in the 106-pound third-place match on the line. Cantu went to work right away and worked Graceau over before pinning him just before time expired in the first period.

In the third-place match, Cantu took on Simley’s Cael Berg. Cantu scored two points in the opening minute and would hold a 2-0 lead after two minutes. He would earn two points on a reversal to go up 4-0 in the second period. Berg was able to score a point at the end of the period, but still had a lot of work left to do. Cantu’s early lead would hold up as he stymied Berg’s offensive attacks to win.