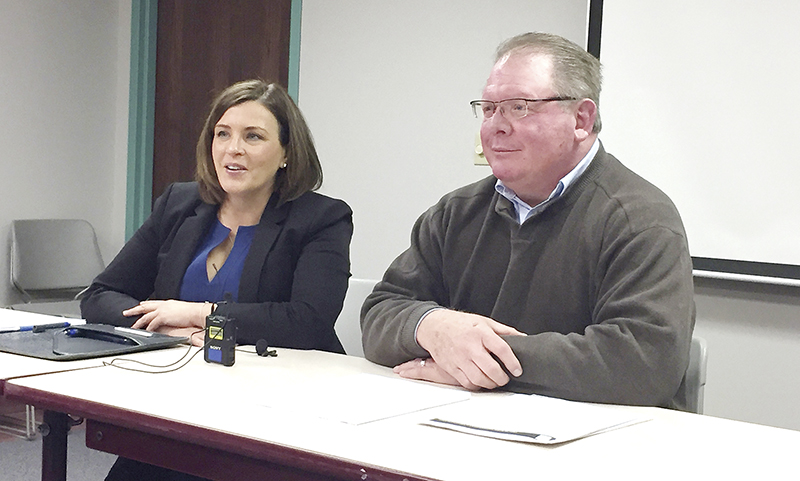 That’s how MNsure CEO Allison O’Toole succinctly summed up the uncertainty surrounding Minnesota’s health exchange and the Affordable Care Act during a visit to Austin Friday.

While O’Toole promised MNsure would open for its fifth enrollment period on Nov. 1, she and AdvisorNet Financial’s Chuck Moline admitted the future beyond that is harder to predict.

“The future is really kind of the elephant in the room,” said Moline, a MNsure broker.

“A lot of people in this area are going to be negatively impacted in terms of what they’re paying,” O’Toole said.

O’Toole warned residents in Mower County and southeast Minnesota will be hit hard.

O’Toole directed people to the Kaiser Family Foundation website, where the nonpartisan health group created a graphic that shows how people will be affected by the law change based on their age and income.

The site shows age and salary groups in Minnesota seeing reductions in the number of tax credits they’re eligible for.

“That is serious,” O’Toole said. “That is real money for these families.”

The bill will likely be much different after the ensuing votes and debate, but Moline said it’s currently looking like it could mean a lot more out-of-pocket-money for consumers.

Moline said he has read and seen that increases in southeast Minnesota will increase 25 to percent and others by 50 percent.

While Moline said the new proposal would not eliminate exchanges like MNsure, O’Toole noted some state proposals send the state program to the federal exchange, where she said there is much confusion right now on the federal level.

O’Toole and Moline both admitted to concerns about how quickly the Republican bill is moving.

“The quicker it goes through, the less time Minnesotans have to understand the changes coming.”

MNsure is the online tool for Minnesotans who don’t get their coverage through their employers. Lower income Minnesotans can access MinnesotaCare and Medical Assistance, and higher income residents can access private insurance as well.

MNsure does not, however, set premiums, deductibles or doctor networks, which come from insurers. Likewise, the federal government sets mandates, penalties and deadlines.

She compared MNsure to health care as Kayak or Orbitz is to flying — they don’t set the rates, but they help find the best options.

MNsure is the only place where Minnesotans can access tax credits to offset the costs of their premiums, which has risen sharply.

On average, tax credits offset about $7,500 a year across the state and are higher in southeast Minnesota, offsetting close to $1,000 a month for about $11,800 a year, according to O’Toole.

“That is huge money that is making a difference for your residents here,” O’Toole said.

MNsure offers in-person assistance to anyone who needs it through brokers like Moline and other providers in the state.

“For thousands of Minnesotans, they couldn’t afford to protect themselves without those tax credits,” she said.

MNsure enrolled about 121,000 Minnesotans in private coverage this year, which is up 40 percent from last year and 96 percent up from the first year.

MNsure also saw increases in the public plans, too, which O’Toole called a positive sign showing that MNsure is getting more Minnesotans enrolled during a time when a dark cloud has been hanging over them from Blue Cross dropping out, premiums increasing and there being much political uncertainty.

“Make no mistake, this last open enrollment period was no walk in the park, but despite all that we had a record breaking year,” O’Toole said.

MNsure is always under a lot of scrutiny, but O’Toole welcomed it as the strive to be transparent.

While Moline admits MNsure has had rocky moments and technical struggles early on, he said there has been improvements every year in the program.

AdvisorNet Financial has been a MNsure partner since the beginning, covering from Albert Lea to the Mississippi River.

With the Republican-led American Health Care Act being discussed in Congress, Moline said people are wondering if things will really get better.

Moline argued Congress isn’t moving ahead in a way that addresses many of the vital insurance issues driving concerns and challenges.

Insurance, Moline noted, involves underwriting risk and trying to keep the bad risk out so the pool of insured people is as healthy as possible so insurers can charge as low a rate as possible.

However, people deemed uninsurable or with preexisting conditions has been in part behind hikes, Moline noted. He argued the focus needs to return to reinsurance programs to address such people.

That keeps the pool of insured as clean as possible to keep rates low and competitive.

Since premium increases were going up well before the Affordable Care Act because of higher cost of care, Moline said they need to involve people like Mayo, Mayo Clinic Health Systems, Allina and other major health providers in the conversation.

“They’ve got to be part of this overall solution if we’re going to make this thing work,” he said.

That comes at a time when the market has not been stabilized yet.

The risk is driving costs, so Moline promoted a reinsurance program like the past Minnesota Comprehensive that guaranteed coverage to people with preexisting conditions.

The Minnesota Legislature is discussion a re-enrollment program, which O’Toole called good news. She praised the state legislature for being focused on market stabilization.

Want to know about the American Heath Care Act and how it could affect people in Freeborn County? Visit kff.org/interactive/tax-credits-under-the-affordable-care-act-vs-replacement-proposal-interactive-map/