Guest Column: You may not love it, but it is always needed

Inside the First Amendment by Lata Nott

Lata Nott is executive director of the First Amendment Center of the Newseum Institute. Contact her via email at lnott@newseum.org. Follow her on Twitter at @LataNott.

You may think you love the First Amendment. You may get misty-eyed just thinking about it. It calls to mind Woodward and Bernstein unraveling the Watergate scandal, Dr. King leading the March on Washington, Voltaire proclaiming, “I disapprove of what you say, but I will defend to the death your right to say it.” (Voltaire didn’t actually say that, but he probably wouldn’t mind that you think he did.) 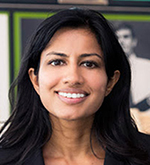 But sooner or later, you will come across something that will make you wonder just what’s so great about freedom of speech.

It could be a campus speaker arguing that Hitler might have been onto something. Or a protester burning an American flag. Or your neighbor’s teenage son, who just bought a drone on Amazon and is now using it to take pictures of your front yard.

You will not disavow the First Amendment (because you love it, of course). You will squarely place the blame on those idiots who are clearly misinterpreting what it means, who think that free speech is somehow a free pass to be a total jerk. They’re the problem, you tell yourself. The First Amendment, when applied properly, is great.

Maybe it’s time for us to come to terms with the truth: While everybody loves the First Amendment in theory, nobody’s all that fond of it in practice.

Consider the massive popularity of partisan media, and, as The Wall Street Journal’s “Blue Feed, Red Feed” project has shown, the complete lack of overlap between liberal and conservative Facebook feeds. We love speakers and media outlets that articulate the thoughts that we were already thinking. We can barely tolerate the ones that contradict our world view. As Nat Hentoff argued in his book, “Free Speech For Me But Not For Thee,” most of us struggle with the desire to relentlessly censor one another.

Supreme Court Justice Oliver Wendell Holmes understood this back in 1919: “Persecution for the expression of opinions seems to me perfectly logical. If you … want a certain result with all your heart, you naturally express your wishes in law, and sweep away all opposition.” Of course, he followed this with an instruction to resist this natural urge, and to think of speech as a marketplace where all ideas should be allowed to compete so that the best ideas can emerge victorious.

It’s nice to think about a bustling marketplace of ideas, but it might be a little tough to hold that cheery picture in your mind when you think about, say, the First Amendment right to sell dog-fighting videos, or to hold up a “Thank God for dead soldiers” banner outside a military funeral. When you picture a marketplace, you can’t help but assess the value of the goods for sale. Do we really have to make space for the vendors selling rotten fruit, or that candy that contains trace amounts of lead?

Hate speech may be protected by the First Amendment, but what benefit do we actually derive from it? How much did Milo Yiannopoulos’s controversial campus visits contribute to intelligent debate when his speeches primarily revolved around publicly ridiculing audience members and basking in his own outrageousness? If the point of free speech is to encourage that intellectual marketplace, to make us a better society, why should we care about defending speech that we find intellectually worthless?

But there’s another way to look at the First Amendment. Maybe we shouldn’t think about free expression in terms of value. Free speech isn’t always valuable, no matter how loosely you define that word. Sometimes it’s hurtful, or nonsensical, or idiotic. What’s important is that free expression rights are always indivisible. Remember: The First Amendment protects your speech from government censorship. It’s meant to keep the power to decide what’s valuable expression and what isn’t out of the hands of public officials. You are not in competition with the people who disagree with you. In the real conflict, all of us are on the same side: How much control over speech do we want to cede to the people in power?

In other words: Your rights are my rights. This is true even if I hate you. Nevertheless, I have to stand up for your rights to speak, to publish, to protest, even if I think your opinions are junk and you are wrong about everything. Not just in service of a lofty ideal, but also out of my own self-interest.

The same holds true for you, for all of us. You may advocate for hate speech policies that will silence bigots, but once they’re passed, these same laws can be used to silence you. You may support laws that are intended to restrict and neuter public protests, but you will find yourself without many options when it comes time to stand up for a cause that you believe in.

You don’t have to love the First Amendment. Just acknowledge that we all need it.