Memorial services for Janis Marie Klinger of New Richland will be at 2 p.m. Saturday at St. Peter Evangelical Lutheran Church in New Richland. The Rev. Scott Williams will officiate. Friends may greet the family one hour prior to the service at the church. Interment will be in the St. Peter Cemetery in New Richland. 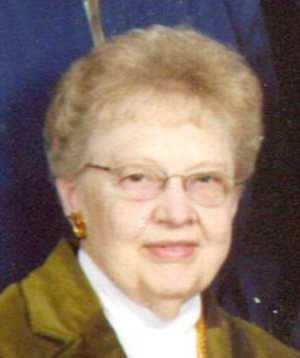 Janis was born Nov. 2, 1935, the daughter of Simon and Lola (Rosacker) Nesdahl. She attended country school in Lemond Township and Owatonna High School. On Nov. 13, 1953, she was united in marriage to Earl Klinger at Pontoppidan Lutheran Church. Janis was an active member of St. Peter Lutheran Church and a member of the church circle. With her husband, Earl, she owned and operated the Welcome Inn Restaurant in Ellendale. Janis also worked for over 14 years as a baker at Trails Travel Center in Albert Lea.

Janis loved baking and cooking. She was a very good seamstress, enjoyed gardening and polka dancing with her husband.

She was preceded in death by her parents; husband, Earl, in 2015; brothers Jerald, Curtis and Dennis Nesdahl; mother and father-in-law Lorenz and Elsie Klinger; and one brother-in-law, Loren Baker.