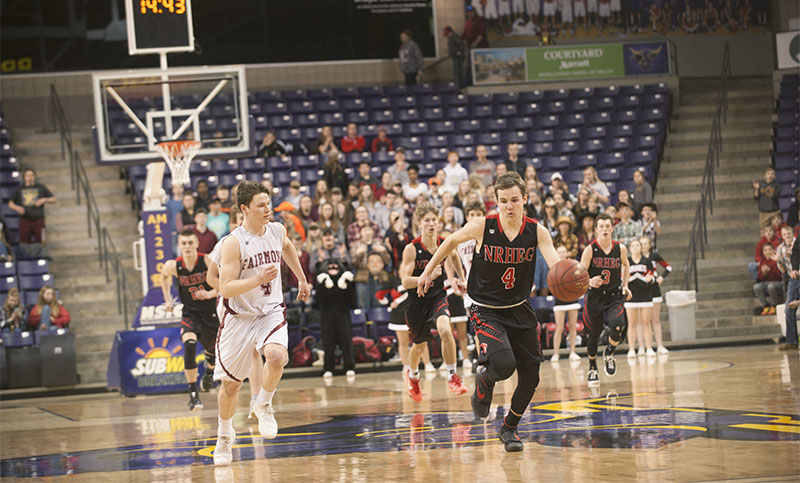 NRHEG’s Benji Lundberg steals the ball and races ahead of Fairmont’s Nathan Kallenbach for two points in the first half of Tuesday’s sub-section final. Lundberg scored 12 points in the game. Jarrod Peterson/Albert Lea Tribune

MANKATO — The NRHEG boys’ basketball team (27-2) didn’t seem to have the same kind juice it has shown throughout the season, but it still found a way to win another game at the end, beating Fairmont (18-10) 45-42 in the sub-section final to advance to the section final Friday night.

“We came away with a hard-fought victory over a very hard-nosed (Fairmont) team,” Panthers coach Pat Churchill said.

Despite some sluggish play, it didn’t stop the Panthers from racing out to an early 8-1 lead against the Cardinals.

Tyler Raimann scored the first hoop of the game. After a free throw by Fairmont’s Walker Tordsen, NRHEG went on a 6-0 run starting with a free throw from Sam Prigge. Chad Agrimson scored on a floater with a nice drive to the hoop, then Benji Lundberg jumped a passing lane and took it in for an easy two points.

A timeout by the Cardinals seemed to calm them down. They would score 11 of the game’s next 14 points by getting hoops from four players. NRHEG’s only answer during that 11-3 run was a three-pointer from Oakley Baker.

NRHEG would make a run at the end of the half to give it some momentum going into the locker room.

Up one point with 2:32 left, the Panthers closed the half on a 7-2 run, capped off by back-to-back three-pointers.

Baker drove into the teeth of the defense, then kicked the ball out to Jason Jongbloedt, who swished it through. Then Baker popped off a screen and knocked one down from deep before the halftime buzzer sounded. 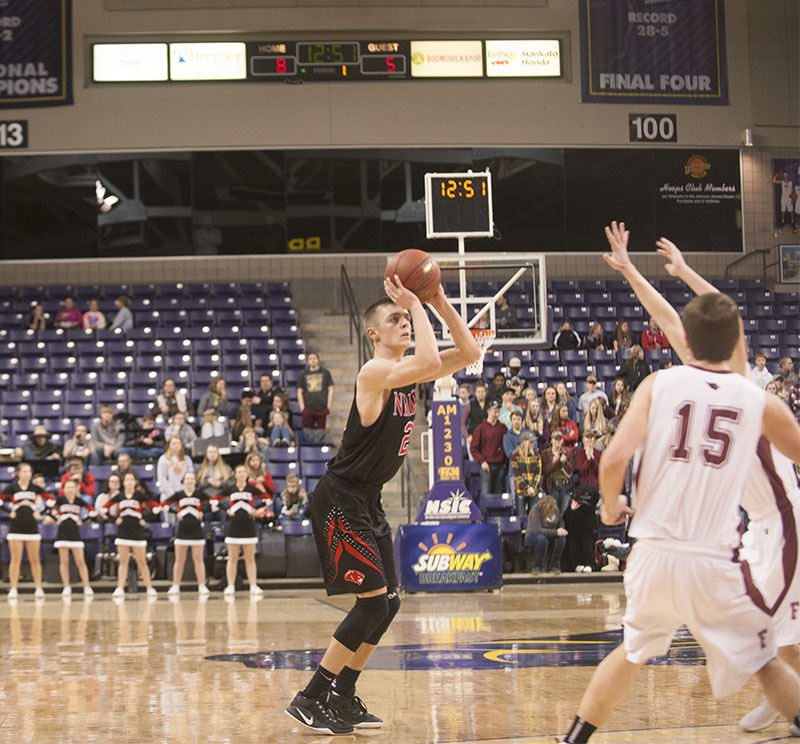 NRHEG’s Oakley Baker gets off a three-point attempt before a Fairmont player is able to close out to him in the first half. Baker finished with 10 points.

The end-of-half flurry was something the Panthers thought would help them in the second half, but it was a different story, at least to start.

The offense spit out two points in the first minute, then went silent for the next nine minutes of the half. During that span of time, the Cardinals took advantage and turned the eight-point deficit into an 8-0 run and tied game at 31-31.

Raimann broke the tie and the Panthers’ drought with an offensive rebound putback, but Fairmont’s Brady Allen would bury a three-pointer seconds later to give the Cardinals their first lead of the game.

“Our saving grace was that the (Cardinals) weren’t able to pull away,” Churchill said.  “Our defense allowed us to stay in the game. We just couldn’t get anything to fall on offense.”

But then Lundberg would take over. In the latter part of the half, Lundberg went on a 6-2 run by himself with a series of hoops from mid-range. His last hoop would break a 37-37 tie with just over five minutes to play.

Raimann seemed inspired by seeing Lundberg carry the offensive load. He got out in the passing lane and deflected the ball. Then, he chased it down and took it down the court for two points.

The Cardinals had a chance at the end, though. Baker hit two free throws to put the Panthers up four points, but then missed the front end of the 1-and-1 not once, but twice.

The first time Baker missed, Allen came down the court and made him and the Panthers pay with a three-pointer. Baker was fouled on the in-bounds pass and, in the process, was poked in the eye. That poke caused his contact to fall out. He found it and put it back in, but he still missed the front end of the bonus.

The Cardinals had a chance to take the lead with 28.5 seconds left, but took too much time on the ensuing possession that ended with Nathan Kallenbach trying to drive and kick out the ball, but Agrimson knocked the ball loose and Lundberg scooped it up. He was fouled immediately and calmly sank both free throws to send the Panthers to the section finals.

“I’m extremely proud of our boys,” Churchill said. “What a tough group of kids who fight so hard together.”

NRHEG will have to bring the fight when it faces Jordan (22-3) at MSU-Mankato on Friday. Jordan raced past Glencoe-Silver Lake in the other sub-section matchup, 77-59.