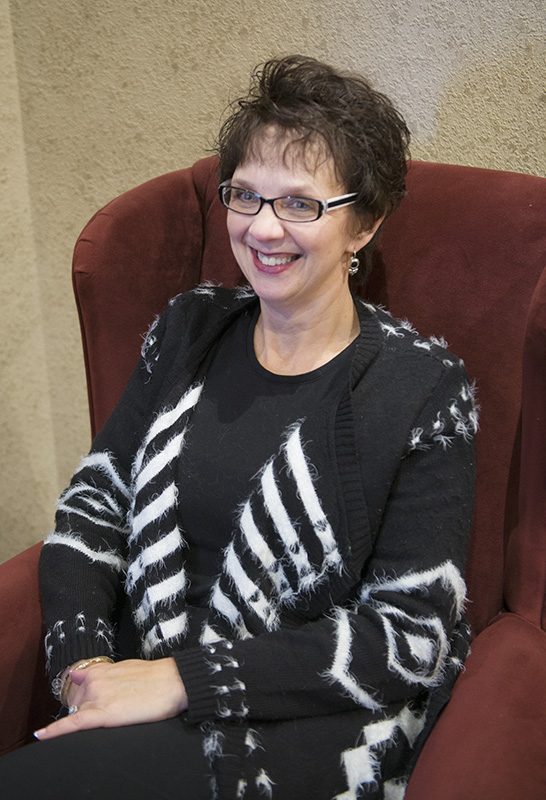 Tina Stripe was diagnosed with breast cancer after a routine mammogram in 2012. Following a double mastectomy one month after her diagnosis, she has since been cancer-free. Colleen Harrison/Albert Lea Tribune

Most everyone has been affected by cancer in some way, from either being diagnosed with some form of it themselves or through someone they care about being diagnosed.

Albert Lean Tina Stripe has been on both ends of that spectrum.

Stripe was diagnosed with breast cancer following a routine mammogram in September 2012. On Oct. 24, 2012, Stripe had a double mastectomy. She remembers the date because it was her wedding anniversary with her husband, James.

Stripe’s husband had previously battled colon cancer himself, and when he went in for a checkup scan in September of that same year he found out his cancer had returned through a spot on his lungs. He would have surgery in October of that year, as well.

For Stripe, everything was a blur. She couldn’t believe her family would have to go through that similar journey again. She said that she and her husband talked about how they would break the news to their three children, who were all teenagers at the time. Stripe said the couple decided to calmly tell their children, and to stress that — as a family — they would get through it.

“I remember just not being able to deal with any of it,” Stripe said.

The couple went to Rochester for their respective surgeries following the advice of Albert Lea medical staff. When Stripe would go in for reconstructive surgery in April 2013, her brother had to take her as her husband was too ill at the time.

Stripe said she was lucky in not having to go through chemotherapy or any other forms of treatment aside from surgery. She attributed that to the fact that her cancer was caught very early, and said that it enforces to her just how important routine mammograms are.

“If mine wouldn’t have been caught, it would’ve been a whole different story,” Stripe said.

Even without prolonged treatment, Stripe said her bout with cancer is still mostly a blur, as she was more worried about her husband’s health and how their children were coping at the time.

“My focus was on taking care of (James) and the kids,” she said.

Stripe’s husband passed away at the age of 54 in August 2013. By that time, Stripe said he had shut down and was in quite a bit of pain. While she said some couples have the conversation about what’s going to happen when one of them dies, that wasn’t a conversation they had.

“He was a fighter till the end,” Stripe said. “It took everything out of him just to get through the day.”

Through the loss, the family was comforted by the support of those around them, she said.

“This community is amazing,” Stripe said. “People carried us when we could not take one more step.”

Through the months the Stripes battled cancer and in the months following her husband’s death, Stripe said people brought over gift baskets, mailed cards and gift cards, paid for groceries and showed up to see what else could be done for the family. There was also a benefit to help with medical expenses.

“It makes the road a bit easier to travel,” she said. “I don’t know how you ever say thank you for what they did for our family.”

The loss of her husband made their three children — Carlton, Karina and Chloe — grow up a bit faster, Stripe said. But, it also gave her children an amazing sense of empathy for others and brought the already close-knit family even closer together, she said.

While it has been about 3 1/2 years since they lost their father, Stripe said the family makes a point of keeping up some of the traditions he started. They still watch some of his favorite movies and quote his favorite lines, as he was an actor with the local theater. They also have a Christmas tree they put up each year just for him and make sure to have salted nut rolls — one of his favorites. They have a team participating in the American Cancer Society’s Relay for Life each year, as well.

While her first husband will never be forgotten, Stripe said her story finishes on a happy note. She’s now engaged to Matt Kermes, who lost his wife to breast cancer just 12 days after Stripe lost her husband. Stripe said she and Kermes initially became close over the loss of their spouses, and the couple will be married in July.

3 – Children Tina and James Stripe had together