A California man allegedly found Saturday with more than 30 pounds of marijuana on Interstate 35 was charged Monday with third-degree drug possession in Freeborn County District Court. 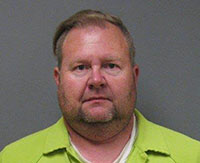 Jonathan Lynn Lorenzen, 43, of Azusa, California, was charged after a Minnesota State Patrol trooper made a traffic stop of a vehicle Lorenzen was driving on Interstate 35.

Court documents state the trooper smelled marijuana, and Lorenzen allegedly admitted to having a marijuana pipe inside a bag after a K-9 alerted the trooper to the vehicle.

Thirty 1-pound bags of marijuana were allegedly found, and Lorenzen reportedly made statements about being “set up,” and “trafficking narcotics.”

Court documents state the preliminary weight of the marijuana was more than 30 pounds.

District Court Judge Ross Leuning set conditional bail for Lorenzen at $5,000 on Monday, contingent on him keeping contact with his probation officer, not leaving the state without written court approval, not using or possessing drugs and alcohol and meeting other conditions.

Lorenzen’s next court appearance is scheduled for March 16.

Third-degree drug possession carries a maximum sentence of 20 years in prison and a $250,000 fine.