She was born Nancy Stryker Slagle on May 1, 1931, to John and Doris (Stryker) Slagle in Syracuse, New York. After high school graduation she attended Cincinnati Conservatory of Music and graduated from the University of Cincinnati with a Bachelor of Science degree in chemistry and nutrition. She was a member of Delta Omicron National Music Fraternity, Theta Alpha Phi National Dramatic Fraternity and Kappa Alpha Theta Sorority. 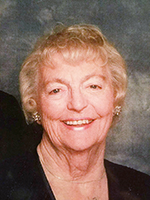 Nancy was a therapeutic dietitian in Dayton and an instructor at the vocational high school in Grand Rapids. She was coordinator and training instructor for the adult foster care program in three counties in Michigan. During her eight years in Owatonna she was food service director at Owatonna Hospital. In Albert Lea she was a guardian ad-litem for Freeborn and Mower Counties.

She was preceded in death by her parents and her brother.

Memorial service will be at 1 p.m. Saturday at First Presbyterian Church in Albert Lea. The Rev. Dwight Netzer will officiate. Visitation will be one hour at church prior to the service. Internment will be at the family’s convenience at a later date. Memorials may be given to the First Presbyterian Church Worship Committee, the Owatonna Arts Center, Albert Lea Community Theater or the charity of the donor’s choice.