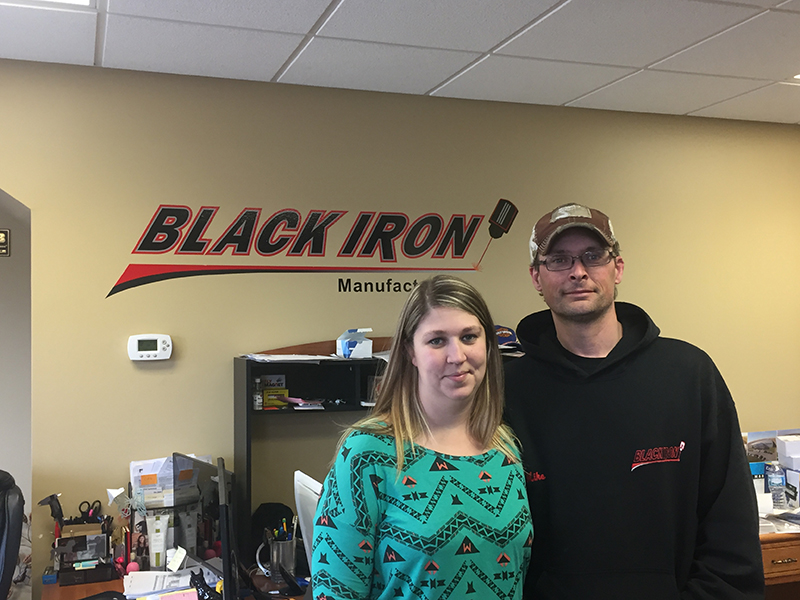 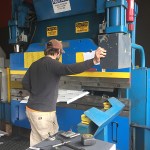 A Black Iron Manufacturing employee uses a break press to bend a cut piece of sheet metal into the shape specified by its customer’s blueprints. – Kelly Wassenberg/Albert Lea Tribune 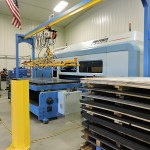 Black Iron Manufacturing has two break presses and two laser presses like the one shown. The company plans to purchase two more in the near future. – Kelly Wassenberg/Albert Lea Tribune 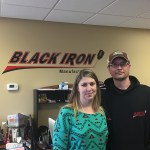 GLENVILLE — Many would like to say they know their business inside and out, but few can do so as confidently as Michael Wallin, owner of Black Iron Manufacturing in Glenville.

Before beginning his business two years ago, Wallin traveled the world utilizing his master’s degrees in laser physics and mechanics to repair Finn-Power International machinery. That machinery now graces his shop floor in a manufacturing business he literally built from the ground up.

With his wife, Jessi, who serves as office manager, Wallin has been able to exceed goals he set for the company upon its conception.

“We had a five-year plan and achieved that plan in two years,” he said. “Our entire 2017 goal was already met in three months. We’re just progressing so fast.”

Wallin credits the success to his business philosophy.

He said most manufacturers have everything made in China because it’s so cheap. To bring those manufacturing jobs back, he knew he couldn’t cut his employees’ wages because no one would want to work for him. To compete, Wallin knew he had to have machines that would speed up the process of cutting parts from sheet metal. By speeding up production, he’s able to keep his prices down.

“We’re delivering the highest quality parts at the fastest turnaround times among anyone,” he said. “That’s why we’re growing by leaps and bounds.”

Like many manufacturers, Black Iron doesn’t make the end product. Instead, the company makes components of bigger projects from blueprints sent to them by the companies they work with. Sheet metal is cut, machined and welded to the customer’s specifications and then is sent onto another facility that will finish the product, oftentimes with other parts sent to them by other manufacturers.

Wallin likened the process to that of a car. No car company makes every component of a vehicle. Tires, electronics and engine parts are all made by other manufacturers contracted to do so by the car company who then assembles the vehicle and markets the final product to the consumer. His business is merely a stop in the assembly line of another company’s product.

While the company does work for larger companies, they still provide manufacturing, machining and welding services to the public. He said customers can bring in a sketch of what they need and they can produce it.

Black Iron Manufacturing employs three other employees in addition to the Wallins. Two more are scheduled to start in a matter of weeks and the couple is already talking of expanding.

Originally, they wanted to double the space of their facility five years after opening. Wallin said his plans have since been expedited and an expansion could be in the works in a little over a year.