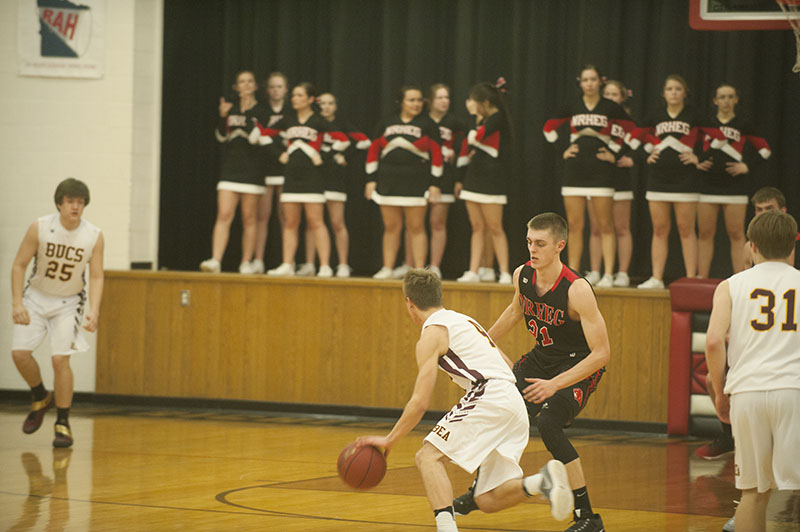 With a spot in the sub-section finals on the line, the NRHEG boys’ basketball team was going to have to beat Maple River for a fourth time this season.

In the previous three meetings, the point total has been over 100, but Thursday night was different. The two teams exchanged defensive blows. Down the stretch, defense and good free throw shooting lifted the Panthers to their 26th win of the season, 48-44.

NRHEG’s offense got off to a blazing start. The Panthers scored the first 10 points of the game, but then went ice cold. Maple River got on the board thanks to two hoops from Wyatt Johnson. After Johnson’s second hoop, both teams found it difficult to score.

“Defensively, both teams were locked in and shots were not falling,” Panthers coach Pat Churchill said. “Going into halftime, I felt only being down one point and not shooting well, we were still in the game.”

NRHEG’s Oakley Baker, who  has been an offensive star for the Panthers all season, didn’t score a point in the first half. But he scored 11 points in the second half, including a three-pointer early in the half to put his team up.

The two squads played the second half to a near draw until NRHEG’s Benji Lundberg, like he did in Monday’s win against Blue Earth Area, took over the game. He scored 10 straight points to give NRHEG a five-point cushion with three minutes left in the game. Maple River would pull to within two points four consecutive times, but NRHEG’s ability to knock down free throws helped secure the win.

“There are going to be games like this in the tournament and you have to find ways to win,” Churchill said.

“Our defense has carried us all year and it was no different (tonight). This was a hard-fought victory tonight against a very good basketball team.”

The victory puts NRHEG in the sub-section championship game against Fairmont (18-9) on Monday.

The game will be played at Taylor Center on the campus of Minnesota State University-Mankato.