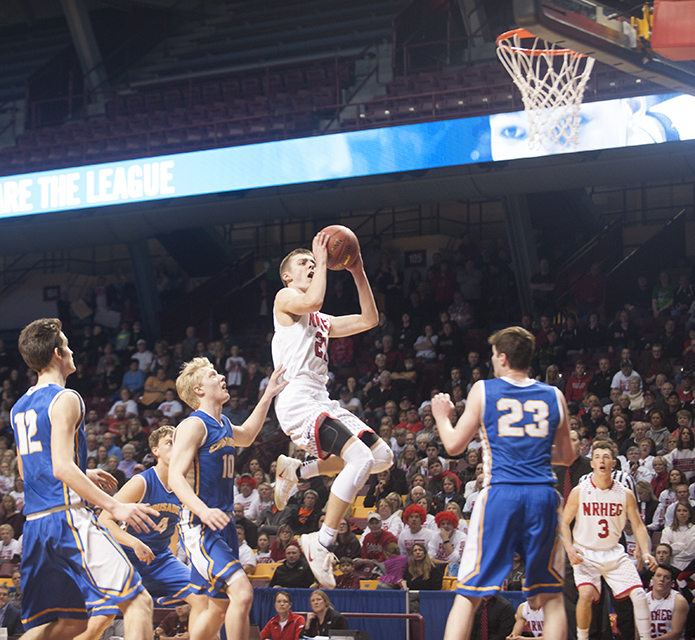 NRHEG's Oakley Baker glides past the defense on his way to the basket in the second half. Jarrod Peterson/Albert Lea Tribune

MINNEAPOLIS — The Panthers came into their boys’ basketball state tournament quarterfinal game afraid of nothing.

NRHEG repeatedly came back against their opponent — the St. Cloud Crusaders — even getting a three-pointer from Benji Lundberg at the end of regulation to send the game into overtime.

But in the extra sessions, the Panthers were running on fumes. With the losses of Tyler Raimann and Oakley Baker due to fouling out, NRHEG was short-handed and fell to St. Cloud Cathedral 70-59.

The Panthers had to battle foul trouble for some key players in the first half, but were still able to play somewhat aggressive.

It was St. Cloud Cathedral that got off to the hot start, though. Its first three buckets came from three-point land as the Crusaders jumped out to a 9-3 lead.

A floater by Lundberg helped stem the tide. Following a hoop by the Crusaders, Brady Agrimson went 1-2 from the line, then Baker came off a double-screen and buried a three-pointer from the top of the key.

That shot would get the Panthers to within two points at 11-9.

But the Crusaders would respond with an 8-4 run thanks to threes from Nicholas Schaefer and Plombon and two free throws by Michael Schaefer. 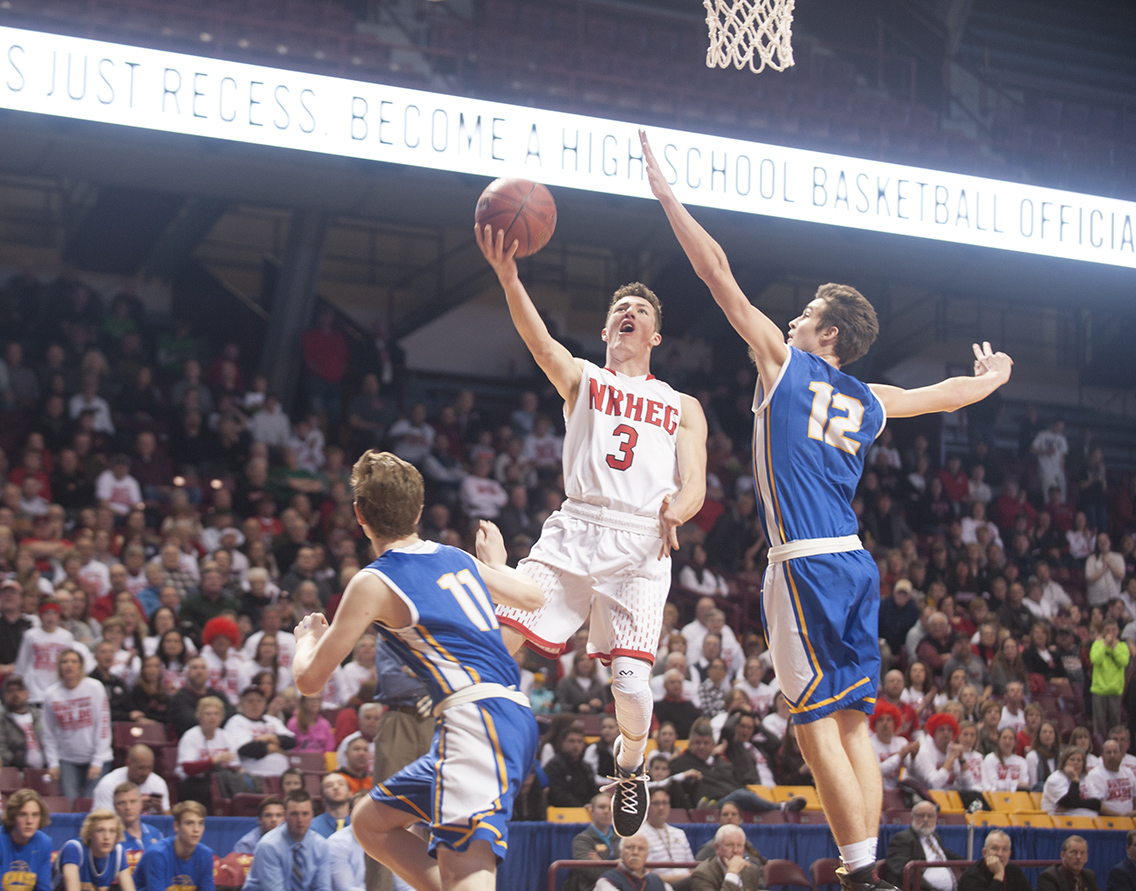 NRHEG’s Jason Jongbloedt attempts a layup over the outstretched arm of the Crusaders’ Mitchell Plombon in the first half​. – Jarrod Peterson/Albert Lea Tribune

Panthers big man Raimann scored his first two points of the game at the 6:50 mark when he muscled his way to the hoop. His basket made it 19-15 Crusaders.

A few moments later, he and Baker each picked up their second foul. Both exited the game, and the Crusaders jumped at the opportunity by scoring five straight points to go up 25-17.

Lundberg wouldn’t let his team fade at the end of the half, though. He went on his own 5-0 run that was capped off by a three-pointer off an offensive rebound.

The two teams would continue to battle into the second half.

Raimann, who was rather quiet in the first half, came alive in the final 18 minutes of the game.

But it was St. Cloud Cathedral’s Michael Schaefer who stole the show early on. He scored eight of his team’s first 10 points of the half. He hit a three-pointer that put the Crusaders up 10 points, 37-27, with 13:12 left to go in the game.

The three would force the Panthers to call a timeout.

Searching to find some offense, NRHEG turned to Lindberg, who scored four quick points to cut the lead to six. Raimann battled hard down low, earning a trip to the foul line. He would hit both free throws to stretch it to a 6-0 run for the Panthers.

NRHEG would get another stop on defense. On the next possession, Raimann was persistent, grabbing two offensive rebounds — converting on the second shot attempt to cut the deficit to two points, 37-35.

To complete the 10-0 rally, Raimann would bully his way up for two more to tie the game. Michael Schaefer would end the run with a hoop of his own, but Raimann quickly responded with a basket on the next possession. The next time down the court, he was fouled and would give the Panthers their first lead of the game at 40-39 with 7:13 left.

From that point on, no team would have a lead larger than three points.

The Crusaders took back the lead with a Plombon hoop, 46-43.

From there, the Panthers would play catchup. Down 48-45, Lundberg’s three-point attempt rimmed out with just over two minutes remaining. After a defensive stop, NRHEG had three chances on the next possession. Baker’s three-pointer bounced off the rim, but Raimann was right there to gobble up the rebound. He rushed his putback attempt, but quickly gained possession again. His second attempt rolled off the rim with 53.7 seconds left.

The Panthers were left to foul.

The Crusaders would keep the Panthers in the game by missing a free throw and then committing a foul.

St. Cloud Cathedral’s Keaton LeClaire went 1-2 from the line. On the ensuing possession for NRHEG, Baker was knocked down on a three-point attempt. He headed to the line and calmly knocked down all three free throws.

NRHEG would foul again. Schaefer hit both attempts to put the Crusaders up three points, but Chad Agrimson would hit a three for the Panthers to tie the game.

However, while the three tied the game, Baker was called for a foul under the basket and it was his fifth foul of the game, meaning he would have to watch the rest of the game from the bench.

The foul sent Crusaders’ guard William Kranz to the line where he hit only 1-2. With a chance to tie the game, Jason Jongbloedt had a layup attempt underneath blocked. The Crusaders gained possession and were fouled again. Up one, Plombon hit both of his free throws with 5.5 seconds left.

This set up Lundberg and the dramatics.

With Baker out of the game, there was no question who was going to get the ball.

Lundberg caught an inbound pass and dribbled up the right side of the floor. Once he crossed half court, he dribbled to his left to the top of the key. As defenders closed in on him and as the clock wound down, Lundberg faded to his left and let a three-pointer fly. As time expired, the ball floated through the air. The ball grazed the back rim and swished through the net, as the entire crowd at Williams Arena erupted with either cheers or shock and awe.

The shot gave the unseeded Panthers new life, or so one would have thought.

Schaefer scored in the opening seconds in overtime, then Raimann fouled while going for a loose ball.

As soon as the momentum came for the Panthers, it was taken away from them.

Two free throws would give the Crusaders a four-point lead. Lundberg would bring the Panthers to within two with a pair of free throws, but that’s as close as NRHEG would get.

St. Cloud Cathedral would continue to pull away.

Schaefer had 33 points to lead all scorers. Plombon had 25 points.

The loss sends the Panthers to the consolation bracket, where they have the possibility of placing fifth in the tournament.