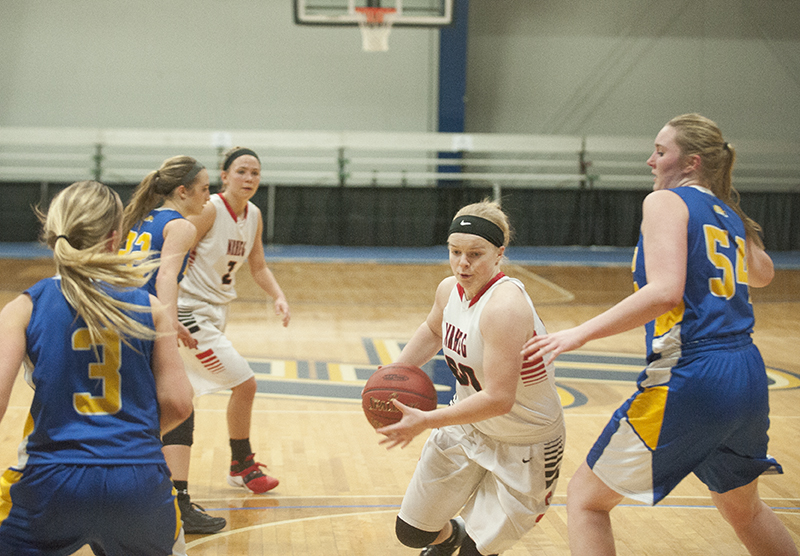 Panthers’ guard Grace Johns gets by Eskimos center Bridget Yellin on her way to the hoop in the second half of Thursday’s game. - Jarrod Peterson/Albert Lea Tribune

ST. PAUL — It wasn’t pretty, but NRHEG overcame a six-point deficit in the second half to beat the Esko Eskimos in the consolation semifinal, 52-47, Thursday afternoon on the campus of Concordia University-St. Paul.

After playing at a breakneck pace in Wednesday’s quarterfinal game against Roseau, NRHEG played a game that was more suited to its needs.

Betsy Schoenrock provided solid play off the bench for the Panthers. She scored six points in the opening half and Maddie Wagner was able to find her offense by chipping in seven points.

The first half started slowly for both teams with a combined five points being scored in the first four and a half minutes. Even though NRHEG entered the locker room with a 23-19 lead, it struggled from the field. The Panthers shot 9-25, but had just seven turnovers, compared to 19 in their quarterfinal game. NRHEG’s defense came to play, forcing Esko to shoot 9-24 from the field and forcing nine turnovers.

The pace picked up when Esko’s Mackenzie Holland and Bridget Yellin scored on back-to-back hoops to give the Eskimos a 7-4 lead.

On NRHEG’s next possession, Rachel Collins found Maddie Wagner for a three-pointer to tie the game. Grace Johns would add a free throw to make it 8-4.

The two teams would trade blows on the offensive end. A three-pointer from Esko’s Sydney Hanson gave her team a 17-14 lead. The Panthers would end the half on a 9-2 run thanks to a three-pointer from Collins to answer Hanson’s, then Schoenrock found space underneath the hoop for two more. Two more free throws from Johns made it 21-17 NRHEG.

In the second half, the Eskimos found offense early on thanks to a three-pointer by Selena Shady.

Marnie and Maddie Wagner would respond with a two and three-pointer, respectively, to give the Panthers a 28-24 lead. Shady would bury another three, then Yellin scored two on a pretty hook shot. 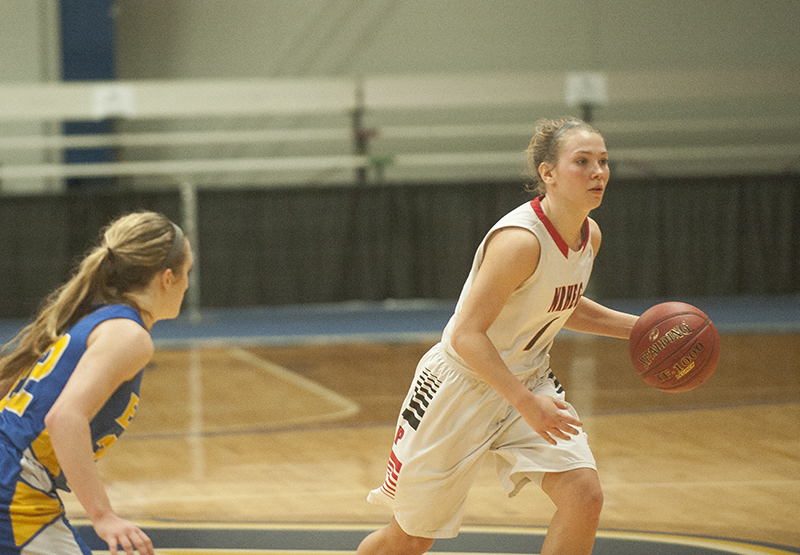 Panthers guard Maddie Wagner initiates the offense in the second half. She scored 14 points in the game. – Jarrod Peterson/Albert Lea Tribune

After a free throw by Schoenrock, Shady would drill her third triple of the half to give the Eskimos their biggest lead of the game at 39-33.

This is where NRHEG would buckle down on defense.

It started with a Schoenrock offensive rebound, in which she ripped the rebound out of Yellin’s hands, scored and was fouled. She converted the free throw to bring the deficit down to three points.

Esko got a three-pointer from Macy Sunnarborg, but Johns quickly answered with a three of her own that saw the NRHEG fan section erupt.

Down three, Marnie Wagner pulled up for two, then she cashed a three after a made free throw from Esko’s Ava Gonsorowski. Her three gave the Panthers a 46-45 lead.

Schoenrock blocked a shot, then Maddie Wagner came down and hit two free throws to extend the lead to three points, 48-45.

Gonsorowski scored a hoop, but that would be the last bucket Esko would make over the final two minutes.

Off a broken play, Marnie Wagner pulled up in the lane for two points to seal the game for the Panthers.

NRHEG will play Rochester Lourdes for the consolation championship at 2 p.m. Friday at Concordia University-St. Paul.