Funeral services for Ralph Stegenga of Albert Lea will be at 2 p.m. Sunday at First Presbyterian Church of Albert Lea. The Rev. Dwight Netzer will officiate. Visitation will be one hour prior to the service at the church. Interment will be in Hollandale Cemetery in Hollandale. 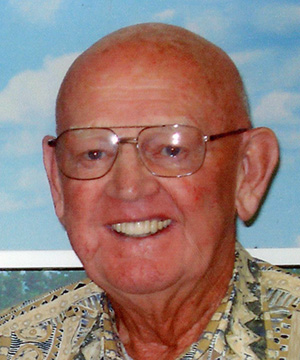 Ralph was born July 6, 1930, on the family farm in Hollandale, the son of Joe and Dora (Brenema) Stegenga. He served in the United States Navy during the Korean War before returning to the family farm, where they grew carrots, potatoes and onions for many years. Ralph was active in the Hollandale Marketing Association and the Watershed Board.

On Jan. 10, 1953, he married the love of his life, Marilyn Ann Johnson, at East Freeborn Lutheran Church. Ralph was a lifelong resident of Hollandale until his retirement. His passion was golf, where he spent many hours with his friends on the golf course — even in the winter months — where he and Marilyn resided in Florida. He enjoyed traveling and was an active member of the Kiwanis Club and the American Legion — but not the Shriners because they wouldn’t let him just drive the cars.

Ralph was an avid sports fan and especially enjoyed the Minnesota Twins and Vikings. His true love however, was watching high school sports and music programs when his grandchildren were involved. He was fortunate to do this in Minnesota and Florida. He was a very proud grandfather who truly loved spending time with his grandchildren.

He was preceded in death by his parents Joe and Dora; and brothers Albert, Elmer and John.

The family would like to extend a special thanks to the staff at Thorne Crest Memory Care.

Ralph leaves a legacy of friendliness. Many will remember him for his happy smile and big waves.