Roseau runs through NRHEG in quarterfinals 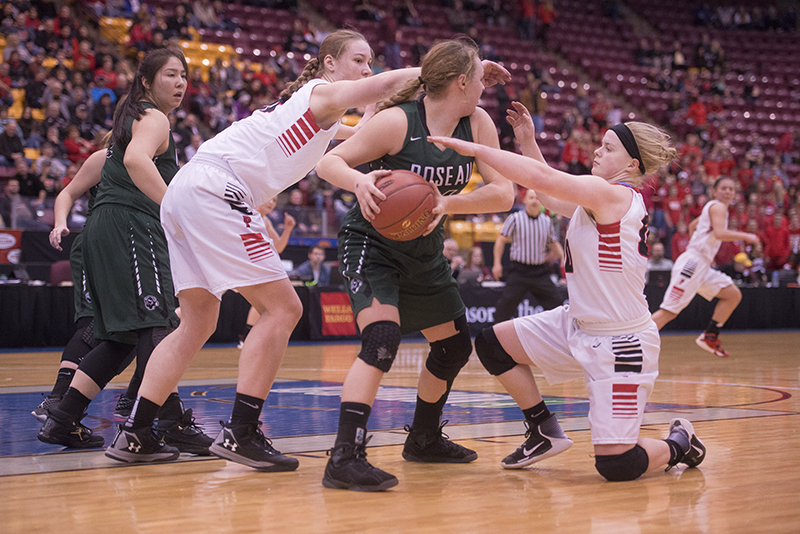 NRHEG's Betsy Schoenrock, left, and Grace Johns attempt to get the ball back during Wednesday's game at Mariucci Arena. - Colleen Harrison/Albert Lea Tribune

MINNEAPOLIS — In the opening minutes of Wednesday’s Class AA girls’ basketball quarterfinals, it was hard to understand how Roseau (30-0) came into the game against NRHEG averaging 82.7 points per game.

The Rams threw the ball all over the court and missed their first seven shots. But it didn’t take long to figure it out once the Rams made their first basket.

They run past opponents.

The Rams put on a helter skelter defensive display in a quarterfinal rout, handing the Panthers (25-6) an 82-64 loss in the Minnesota state high school basketball tournament.

Marnie Wagner put the Panthers on the board early with two free throws.

A dead ball turnover by Roseau allowed the Rams to set up their press. Morgan Groenhoff scored the first points off the press by stealing a pass and laying it in for two.

The two teams would go back and forth for most of the half. NRHEG’s Maddie Wagner spent a good portion of the half on the bench in foul trouble and it didn’t hurt the Panthers right away, but it eventually would.

Schoenrock made her presence felt immediately and throughout most of the half. She scored 12 points on 5-7 shooting in the opening half in a variety of ways. Off breaking the press, Kelly Harden found Schoenrock under the hoop for an easy layup.

A few possessions later, Schoenrock did it all herself. She backed down Roseau’s Victoria Johnson and nailed a turnaround shot to bring her team to within a point at 10-9. Schoenrock would add nine rebounds and four blocks.

Marnie Wagner was another standout for the Panthers in the opening half and helped NRHEG keep it close. She buried back-to-back triples, with the second one giving the Panthers a 20-18 lead.

But it would be the Rams who would turn up the pressure to end the half. The press tired the Panthers out for the first 14 minutes, and the Rams would take advantage for the final four minutes.

Roseau closed the first half on a 25-14 run, getting points from five different players to carry a 43-34 lead into the locker room.

Kiley Borowicz had a big half for the Rams. She had 14 points, 11 rebounds and seven assists in the opening 18 minutes. The senior forward would eventually finish the game with a quadruple-double — 28 points, 13 rebounds, 10 assists and 10 steals.

Things did not get better for the Panthers in the second half.

Roseau continued to apply pressure and NRHEG, with 19 turnovers in the first half, continued to struggle with making the right passes.

The Rams scored most of their 39 second-half points on layups.

The Panthers would try their best to get back into the game. NRHEG went on a 19-4 run in the half to whittle the Rams’ lead down to as little as 14 points, but the deficit was just too much to overcome.

Aside from Borowicz’s 28 points, her sister, Kacie, finished with 22 points.

The loss doesn’t end NRHEG’s season. The Panthers will have a shot at fifth place. They will play Esko at 6 p.m. Thursday at the University of Concordia-St Paul. The Eskomos (24-7 on the season) lost a 48-43 heartbreaker to New London-Spicer on Wednesday. 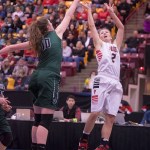 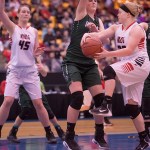 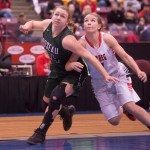 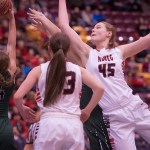 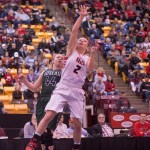 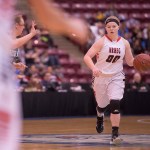 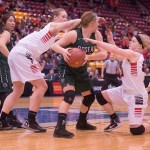 NRHEG’s Betsy Schoenrock, left, and Grace Johns attempt to get the ball back during Wednesday’s game at Mariucci Arena. – Colleen Harrison/Albert Lea Tribune 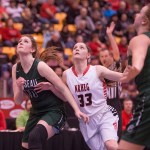