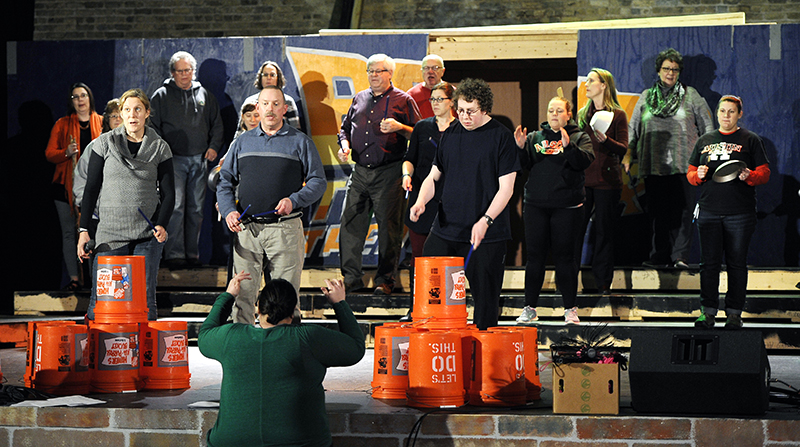 The Northwestern Singers rehearsed at The Paramount Theatre Thursday night in preparation for their annual winter show next weekend. Eric Johnson/Albert Lea Tribune

For another year, the Northwestern Singers — a collection of 40-some Austin singing enthusiasts — will entertain music fans with their annual winter show, this year called “The Wonderful World of Disney.”

The show will feature a variety of Disney tunes from both recent and past Disney hits including “Frozen,” “Mary Poppins” and “Aladdin.”

“I think we always try to go for a mix of songs,” said musical director Nikky Tolde. “Most of the songs people are going to recognize.”

The singers themselves brainstorm ideas for each and every show and then bring the ideas to the board, which takes those ideas and begins searching to see if there is music for themes.

Disney has been one of those things the group has wanted to do for a number of years.

Just by the very fact that this is a Disney-themed show, this year’s presentation will be even more family friendly.

“This is really encouraging people to bring families out to see the show,” Tolde said.

For the second year the annual show will be held in March. This year it will be 7 p.m. March 4 and 2 p.m. March 5 at the Paramount Theatre.

Told said that a number of factors contributed to the move last year including first and foremost the weather.

“January was maybe a little more difficult time with weather and coming off the holidays,” Tolde said. “This way we have a little extra time for the singers.”

The Northwestern Singers will be doing something new this year when they pair with the MacPhail Center for Music here in Austin and its children’s choir.

Guests are nothing new for the Northwestern Singers who invite singers to add to the variety, but to have so many in one shot is a good opportunity for kids to perform on a bigger stage.

“This is the first time inviting them to a show,” Tolde said. “We like to give them the opportunity. It’s a chance for the kids to perform on the Paramount stage and we want to show them that singing is something that can last long beyond school.”

Tickets are $15 for adults and $5 for students and are available at the Austin ArtWorks Center or online at austinareaarts.org.