Stasha was born in Austin on May 3, 1953, the daughter of Chet and Milly Morgan. 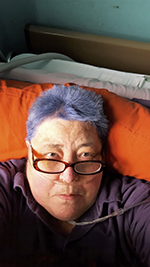 Stasha worked 34-plus years at Schweigers Foods, from where she retired. Stasha loved family and cherished every moment spent together.

Stasha is survived by her sons Harm and Mark; grandsons Ian and Gabe; sister, Judy Morgan; brothers Rodney (Carol) and Terry Morgan; several brothers- and sisters-in-law; and nieces and nephews.

A celebration of life will be announced at a later date.