Veal not competent to stand trial for homicides — for now 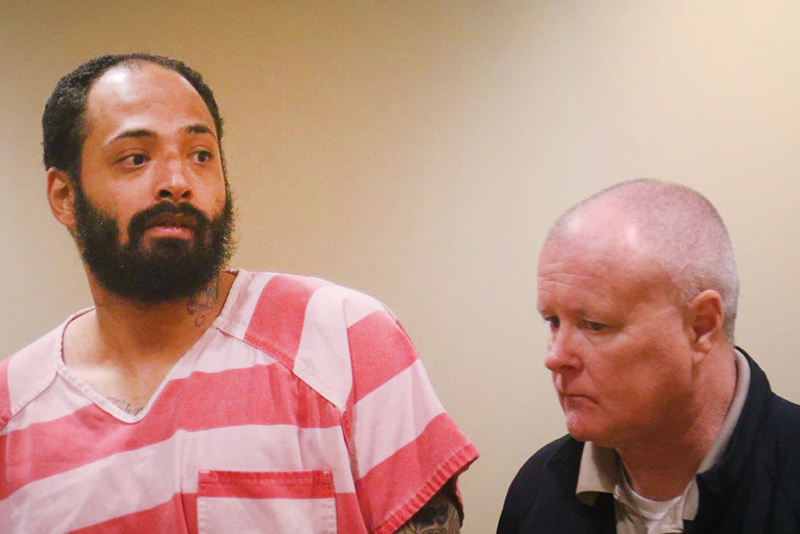 Peter Veal, left, is led out of the courtroom at Cerro Gordo County Law Enforcement by Brice Ausenhus, court records officer for the LEC, after a hearing in early January on whether Veal should undergo a psychiatric evaluation. - Mary Pieper/Mason City Globe Gazette

MASON CITY — A judge ruled Friday that a Lake Mills man accused of murdering two people in Mason City in November is not mentally competent at this time to stand trial.

Peter Veal, 30, is being sent to the Iowa prison system’s licensed Forensic Psychiatric Hospital to be treated until he is able to participate in court proceedings.

Veal was charged with two counts of first-degree murder in connection with the Nov. 17 deaths of Mason City residents Mindy Kavars and Caleb Christensen at a residence in the 1600 block of North Hampshire Avenue.

He also is facing one count of the attempted murder of a witness at the scene.

District Court Judge Rustin Davenport based his ruling on a report from a doctor. The doctor determined Veal is suffering from a mental disorder that prevents him from understanding court proceedings and participating in his own defense.

Cerro County Attorney Carlyle Dalen said the state has 18 months to allow Veal to get to the point where he can stand trial.

“We are optimistic that will take place,” he said.

Dalen said the state reserves its right to ask for another medical opinion at a later date.

Veal pleaded not guilty in December and was scheduled to go to trial Jan. 24.

However, court proceedings were postponed in early January after Davenport ruled probable cause existed for a psychiatric evaluation of Veal to determine if he was competent to stand trial.

During the probable cause hearing, Veal’s mother, Leann Veal, testified her son showed many signs of paranoia and had hallucinations.

Veal was taken from the county jail to the Oakdale Medical and Classification Center in late February for his mental health evaluation.