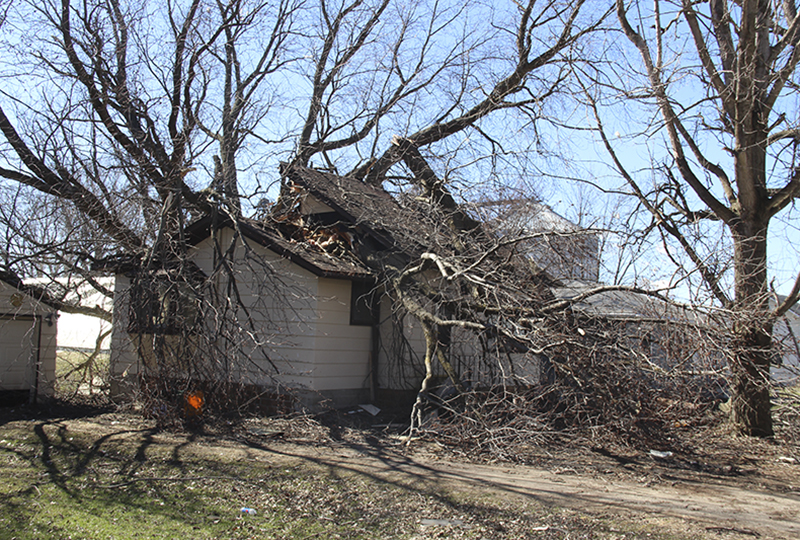 The National Weather Service has confirmed that damage in the Clarks Grove and Geneva areas Monday evening was caused by a tornado.

Classified as an EF1 on the Enhanced Fujita scale, the tornado reached wind speeds of 100 to 110 mph and was on the ground for 12.3 miles, according to the Weather Service.

It began southwest of Clarks Grove at 5:38 p.m. and traveled through the western part of the city before moving northeast through portions of Geneva and through northern Freeborn County. It lifted in Steele County at 5:51 p.m.

At its max, the tornado was 300 yards wide, the Weather Service stated.

The findings came after a team from the agency surveyed damage in the community Tuesday. The tornado was one of two reported in the state.

Rare to take place in the state in March, they are now the earliest recorded tornadoes to ever strike the state. With the Clarks Grove tornado being the first, the second was an EF1 tornado near Zimmerman that began at 5:39 p.m.

The storm caused damage to multiple businesses and residences in Clarks Grove — most in the central and western part of the town — as well as heavy rain and hail in neighboring communities.

The Clarks Grove City Council and the Freeborn County Board of Commissioners earlier Tuesday morning declared the county to be in a state of emergency.

In Clarks Grove, major damage was reported at Hardware Hank, the Central Farm Service facility, the fire station and storage sheds, among other locations.

Freeborn County Sheriff Kurt Freitag said numerous homes suffered roof damage or damaged soffits, and trees and power lines were down in several places throughout the community. Officials were slated to assess the city’s water tower for possible damage.

“Our hearts go out to the community of Clarks Grove and the surrounding area who have suffered from this serious storm,” said Chuck Wagner, senior vice president of agronomy with CFS, in a news release.

The CFS facility will remain closed until Thursday with only CFS personnel on site to continue damage assessments and cleanup. All utilities and services to the facility were being secured and efforts were underway to restore power.

The company has identified damage to the grain and fertilizer structures. Other CFS locations will handle customers needs until the facility is operational.

Clarks Grove Mayor Bruce Hansen said the city has been working on assisting residents and businesses with cleanup and have put out dumpsters in town for debris.

The Fire Department is moving into another building because of damage to the fire hall.

Hansen said he has not seen this kind of damage in town before.

“Normally we’ve always been lucky, and it went somewhere else,” he said.

Hansen directed people with questions to call City Hall at 256-8011 or reach out on the city’s Facebook page.

‘The most haunting noise’

Clarks Grove resident Dalton Dahl was at home with his mother, Linda VanBeek, when the tornado came through the city. Their home, at 105 First St. SW, appears to be a total loss.

Dahl said normally he spends much of his time in the upper level of the house where he has two rooms, but that night he was watching the news with his mother. They noted a change of color in the sky and they knew something bad was coming.

Time passed, and the weather started to quickly change. He said there were quick flashes of lightning followed by rain. The rain started out light and turned into a complete downpour.

At one point, his mother said she couldn’t see the neighbor’s house because of how heavy the rain was falling.

“I had a feeling that something was wrong when I started to hear the most haunting noise,” Dahl said. “I don’t really know how to describe it, but it got gradually louder and louder. People who have been in tornadoes say that it sounds like a freight train, which I would say that’s fairly close to what I heard.”

He said he told his mother they needed to get to the basement. Before they were able to do so, the roof collapsed on the stairs leading up to the second floor.

“It happened so fast that it ended before we realized what had happened,” he said. “I thought it was an earthquake at first because of how hard the house shook — hard enough to have everything hanging on the walls shoot off.”

Some of the moments from that day he said he doesn’t remember, but he knows he called 911, and then after finishing the call, some of their neighbors came over to check and make sure they were OK and to get them out of the house.

‘It’s nothing I ever want to live through again’

Clarks Grove Fire Chief Steve Thisius and Capt. Marv Thompson were with a few of the other firefighters at the fire station that night. They said they were watching outside the back door of the fire hall and at one point thought the storm might pass.

Slowly, Thisius said, it started to get worse. They saw a piece of tin fly by and then they noticed a rotation in the clouds.

“All of a sudden it started roaring right above the post office,” Thompson said.

The men ran inside — some taking cover underneath fire trucks. Thompson said he stood there trying to keep the back door shut.

“It sounded just like a train coming through town,” he said. “I bet it wasn’t a minute or two and it was over, and then we started cleaning up.”

The fire station’s roof was lifted off, and the building sustained other damage, but the men were safe.

“It’s nothing I ever want to live through again,” Thisius said.

‘It all happened so fast’

Diane Moore, who lives on Independence Avenue with her husband, Peter, said she had just gotten off of work at Hy-Vee Monday evening in Albert Lea when she looked up to the sky.

She said she thought it didn’t look good but she thought she could make it home before any severe weather began.

She made it home without any problems and was looking out the back of her house when she heard a loud noise she had never heard before and got a feeling that it was time for her to go to the basement.

“I’ve never experienced anything like that before,” she said. “It all happened so fast.”

The couple had a large pine tree that snappened and fell in their yard, and another tree landed partially on their garage and Peter Moore’s work van.

Diane Moore said she has been grateful for all of the people — county workers, volunteers, neighbors, friends and family — who have already been out to help them clean up the damage.

Skye Miller lives in an apartment on East Main Street next to Hardware Hank in Clarks Grove and said he had just arrived in Mankato for a date night with his girlfriend when he received a call from his landlord checking to make sure they were safe.

Miller said they immediately drove home and faced challenges getting back to their apartment because entrances to the community were blocked off because of safety concerns. They ultimately parked at the museum and walked to their apartment.

“The hardest part with last night was not knowing what was gone,” he said Tuesday. “It was darker than dark.”

He said they were lucky — their dogs were safe and all that was lost in the apartment was a window — but others nearby were not quite so lucky.

“I have nothing to complain about,” he said. “One window is not a big deal over what it could have been.”

He said he and his father helped board up the broken windows at Hardware Hank and the window in the apartment that was broken.

He was grateful to receive help Tuesday cleaning up from co-workers at America’s Best Value Inn. He hoped to get a group of people to help others in the community clean up today and is hopeful the city can rebuild.

“What really got me and gave me the most hope for the town was the flagpole,” he said, referring to a flagpole at Bob Hanson Park near his apartment. “The pole was bent, but the flag was fine. There was no tear, there was nothing.

“If the flag can survive, a town can be rebuilt. … All we can do from there is move forward.” 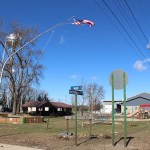 This flagpole at Bob Hanson Park was bent during the Monday storm in Clarks Grove. — Sarah Stultz/Albert Lea Tribune 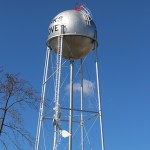 Debris is intertwined with a ladder on the Clarks Grove water tower Tuesday morning after a severe storm swept through the area. — Sarah Stultz/Albert Lea Tribune 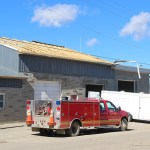 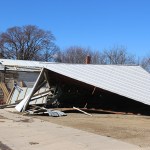 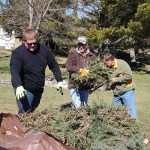 Men clean up fallen tree limbs in the back yard of Peter and Diane Moore in Clarks Grove Tuesday morning. The couple had two large trees that fell during the Monday evening storm. — Sarah Stultz/Albert Lea Tribune 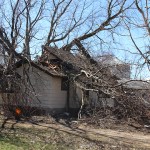