A Wells man who was allegedly in possession of child pornography last week was arrested on multiple felony counts on Monday. 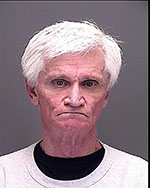 Donald Beckmann Jr., 59, was arrested on charges of possessing pornographic work involving a minor, being a felon in possession of a firearm, fifth-degree drug possession and possessing drug paraphernalia.

According to a press release, Wells police made a traffic stop on a vehicle driven by Beckmann March 6. During the traffic stop, the Faribault County K-9 unit responded and reportedly indicated a narcotic odor on the vehicle.

The Minnesota Bureau of Criminal Apprehension assisted on scene.

Beckmann is expected to be charged Wednesday in Faribault County District Court.