Devices checked out more than 1,000 times

Wi-Fi hotspots introduced last year at Albert Lea Public Library have been checked out more than 1,000 times in the last six months. 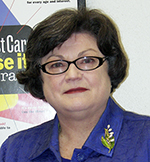 Despite the high volume of customers, library Director Peggy Havener said there are still some people who don’t know about the program.

“There’s still an information gap out there as far as the availability of the devices and what they are used for,” she said.

The program was made possible after the library was awarded a $72,504 grant in August to bring an additional 60 mobile hotspots and 25 mobile iPad tablets to its collection for 12 months.

In the last year, the library has had more than 19,000 logins to its Wi-Fi inside and outside the building.

The program aims to give users free access to digital resources that otherwise would not be available, close the gap in Wi-Fi access and create new opportunities. The program was one of the first of its kind in Minnesota.

Prior to the program’s introduction, an estimated 21 percent of the population in Albert Lea was not connected to the internet at home or elsewhere.

In an internet use survey conducted by officials prior to the rollout of the devices, 45 percent of respondents were somewhat or very likely to checkout a Wi-Fi hotspot device from the library.

Graphics librarian Michelle Gurung said the devices have been user-friendly.

The Wi-Fi program is funded through 2017. Havener said she hopes the service can continue to be provided.

“We still have a large percentage in Freeborn County that do not have access to high-speed internet,” she said. “And we are supplying that service to them.”

As part of the grant, the library will offer an introduction to iPads course. The first is next Wednesday and another will be April 5. An introduction to Facebook course will be at 2:30 p.m. March 22.