Woman describes what it was like living through a tornado 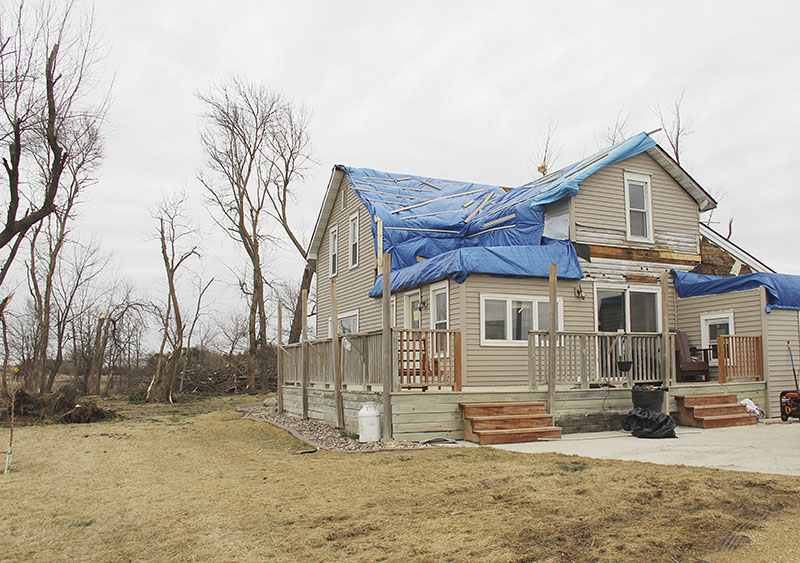 Steven and Karen Quam were in their home at 28914 770th Ave. Monday night when an EF1 tornado came through the area. They are unsure if their house will be salvageable. Sarah Stultz/Albert Lea Tribune 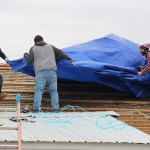 Men work to put a tarp over the roof of a building damaged by a tornado Monday at the property of Steven and Karen Quam. Sarah Stultz/Albert Lea Tribune 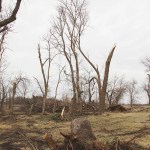 Trees were snapped in the yard next to the Quam’s house. Sarah Stultz/Albert Lea Tribune 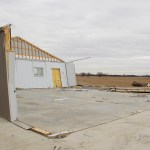 This three-stall garage was destroyed by the Monday tornado. Sarah Stultz/Albert Lea Tribune 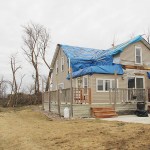 Steven and Karen Quam were in their home at 28914 770th Ave. Monday night when an EF1 tornado came through the area. They are unsure if their house will be salvageable. Sarah Stultz/Albert Lea Tribune

Many Clarks Grove residents knew there was a possibility for storms Monday night, but they didn’t anticipate anything as severe as a tornado.

At only the beginning of March, it was an abnormality to see that kind of weather so early in the year.

“It was pretty nuts,” said Karen Quam, who lives with her husband, Steven, on 770th Avenue north of Thompson Sanitation.

The Quam’s home is one of 55 single-family homes in Freeborn County that were affected by an EF1 tornado that started southwest of Clarks Grove and ended north of Geneva, according to a preliminary damage assessment. Of those homes, three received major damage, and 33 received minor damage.

The tornado was the earliest tornado to ever strike down in the history of the state.

Karen Quam said their home was deemed uninhabitable by county officials, and she and her husband are expecting to find out today if they will have to completely rebuild or if their house is repairable.

“We are actually very lucky it didn’t take the whole house,” she said.

Though much of their roof was pulled off in the tornado and she believes their 150-year-old house has structural damage, she is grateful her family was able to save most of their belongings, which are now sitting in a storage container in their front yard until they figure out what is going on with the house.

She said she and her husband were at home Monday night when the storm came in. Her husband was in the living room, and she was in the kitchen making nachos.

Her husband put their six horses in the barn, and a short while later their lights began to dim and then brighten and then dim again.

“We began to be concerned,” Karen Quam said.

At that point, her husband came out of the living room and looked southwest and saw rain approaching.

Then all of a sudden, the house began to shake.

The shaking was so severe, she said she almost fell over.

“It felt like the whole house went to the east and flopped right back,” she said.

Around the same time, they saw the roof of the porch fly off, and her husband yelled to go to the basement.

“The door to the basement was opening and shutting at will,” she said, noting that seeing this really scared her.

She said by the time they got to the basement, the tornado was over. When they came upstairs, they called their two grown children — one in Lerdal and one in Ellendale — and their parents to let them know they were OK but that there was heavy damage.

In addition to their porch roof being gone, much of the roof on the house was gone, their 40-by-40-foot three-car garage was a total loss and their roof was damaged on their barn.

One of the garage doors  was on top of  her vehicle, and many of their trees were broken. The top of  one of their pine trees was broken, picked up and sat down near the garage.

She said she is grateful for the many people who have already helped in the aftermath.

She said within an hour or an hour and a half after the tornado came through, there were 20 to 30 people who came to help with cleanup.

They were able to save many of their belongings — at least for now. She will look through them more extensively when they unload the storage container.

She is grateful the damage wasn’t worse and advised people to take precautions when severe weather is approaching.

“If you feel it’s time to go to the basement, you’re already too late,” she said.