Two men — one of them a level 3 predatory offender — were charged Friday in Freeborn County District Court in connection with a short vehicle chase Thursday that ended near Halverson Elementary School and reportedly netted methamphetamine and items related to a burglary.

Jabar Pedro Morarend, 45, of Albert Lea is charged with fleeing a peace officer in a motor vehicle. Peter Alan Woollard, 38, of Austin is charged with third-degree meth possession in a school zone and misdemeanor obstructing the legal process. 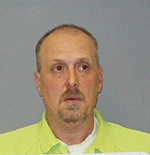 Court documents state the men were charged after a sergeant was informed that Morarend was driving a black van with a revoked license. The van reportedly did not pull over and continued at the speed limit after the sergeant activated his emergency lights and used short bursts from his siren. The vehicle parked at 1606 Frank Hall Drive — Morarend’s reported address. The pursuit reportedly lasted a half-mile.

Morarend — a level 3 predatory offender — allegedly downplayed the incident and claimed he could not see the officer’s lights until he pulled into the alley. His vehicle was described as possibly being used in a burglary in Iowa. A preliminary search of the vehicle reportedly netted numerous burglary tools and pieces of jewelry that could have matched items from the burglary.

Court documents state a metal clip on Woollard’s belt was believed to be a knife. He allegedly had another knife in his wallet that he did not tell an officer about. Inside an open cigarette pack were two large rocks identified as meth. He was reportedly placed into custody within 250 feet of Halverson, and the pursuit was approximately 40 feet from the school.

Court documents state Woollard said he ate meth that was inside of a baggie, and he was transported to the emergency room.

District Court Judge Steven Schwab set conditional bail for Morarend and Woollard at $10,000. Their next court appearances are scheduled for April 27. Third-degree meth possession in a school zone carries a maximum sentence of 20 years in prison and a $250,000 fine. Fleeing a peace officer in a motor vehicle carries a maximum sentence of three years and one day in prison and a $5,000 fine.