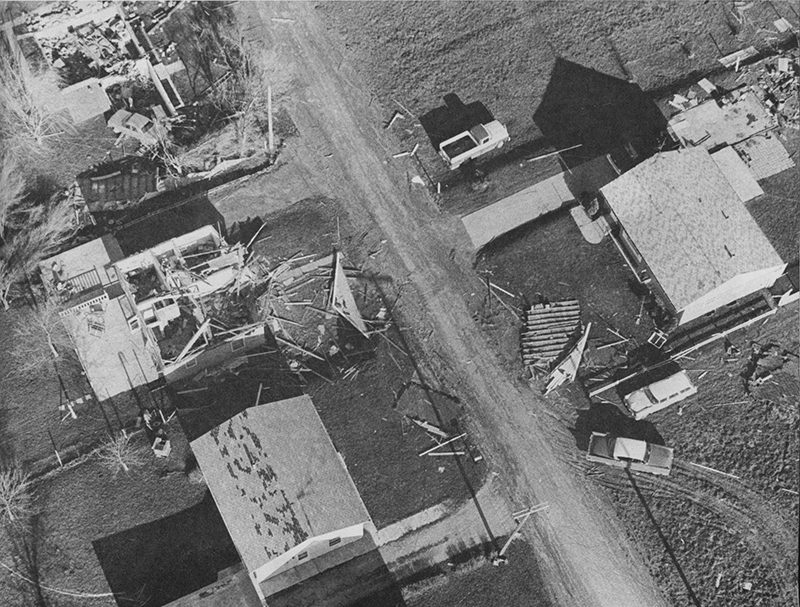 Pat Staloch of rural Freeborn remembers April 30, 1967, clearly. It’s a day he thinks of every year as the month of April draws to a close.

A sophomore in high school at the time, Staloch said he and his five siblings and parents had gone to the golf course in Freeborn to plant trees, and then they came home and started doing chores.

Soon after, Staloch and his father went a quarter of a mile north of their house to feed their sheep when it started raining hard. He said he wanted to wait the storm out in the barn, but his dad wanted to leave, so they ran toward their pickup.

Little did they know at that time, that they would soon live through a tornado from inside that pickup.

That day — 50 years ago today— has come to be known by people in the area as Black Sunday, a day of multiple tornadoes in Minnesota and Iowa, including the worst to ever come through Albert Lea, according to Tribune archives.

Staloch said that day as he and his father sat in their pickup, they couldn’t see any of what was happening outside. When the rain stopped and they looked out the window, nothing was left of their neighbor’s house. Had they stayed where they were, they would have likely been injured.

As they drove back to their house, he saw many other neighbors had lost their homes.

“It was disastrous,” he said.

When they arrived at their house, which is about five miles northwest of Freeborn, about half of their buildings were gone, and all of their windows were broken out of their house. The inside of the whole house was covered with dirt. 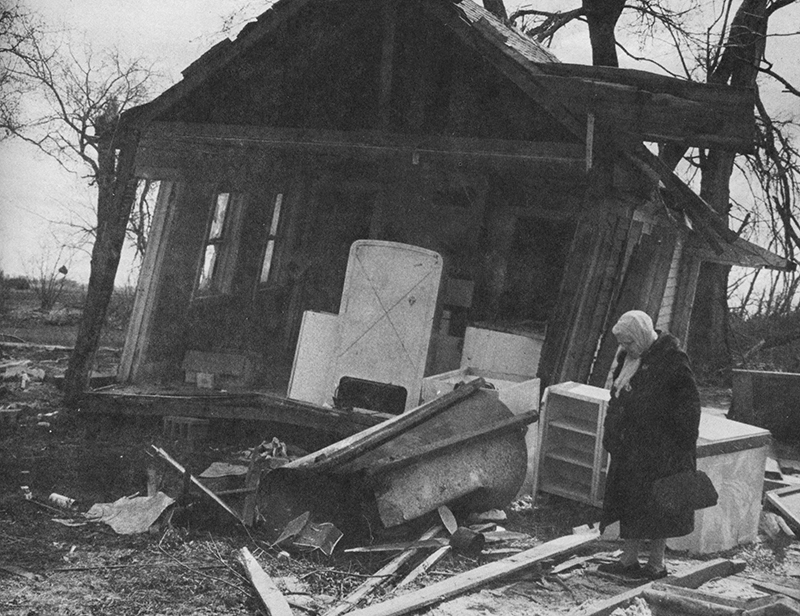 According to archives, 13 people died in Minnesota and Iowa that day, including five people — ranging in age from 26 to 60 — in Freeborn County.

They were identified as the following:

Two other Albert Leans were killed when a tornado touched down near Owatonna where they were visiting, and six others died in the Waseca area.

The records at Naeve Hospital in Albert Lea showed 38 people were treated and released for injuries, and 11 were admitted. Ten people were admitted to Wells Hospital with injuries suffered from the storm that struck western Freeborn County. 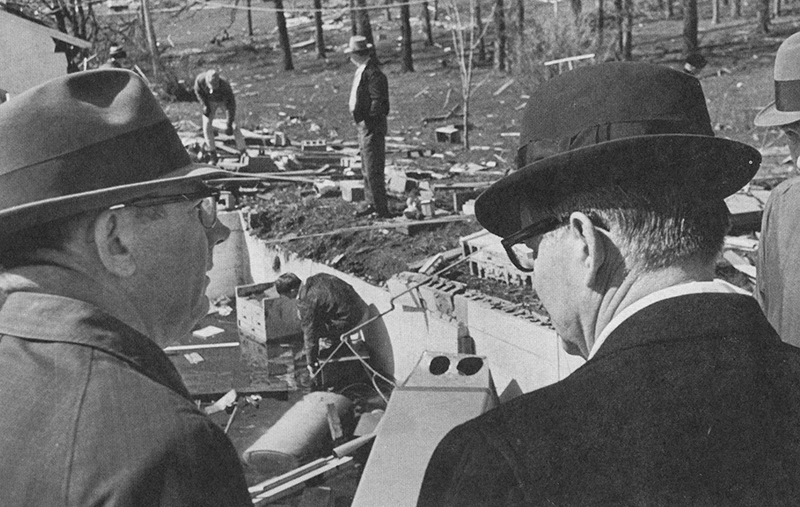 The storm struck Albert Lea at about 6:24 p.m. and caused a power failure for almost half of the city.

The storm offered little if any advance warnings. Though severe weather warnings were in effect for some time before the tornadoes, no actual tornado warning had been given.

Albert Lea rescue authorities said the tornado that went through the city cut a path about 150 to 200 feet wide for 2.5 miles through the city. At least three — and more likely four — tornadoes cut paths through the county, according to a meteorologist at the time. All of the tornadoes moved from the south or southwest to the north or northeast.

Archives show that as many as 100 homes were damaged or demolished in Albert Lea’s Jordan Addition, Garden Villa area, Sunset and Oakwood areas and near Albert Lea Country Club.

Minnesota Gov. Harold LeVander declared the city and surrounding areas damaged by the storm as disaster areas at about 8 p.m. that same day. National Guard units were called in to patrol damaged areas and to transport the homeless to an emergency center that was established at the Armory. 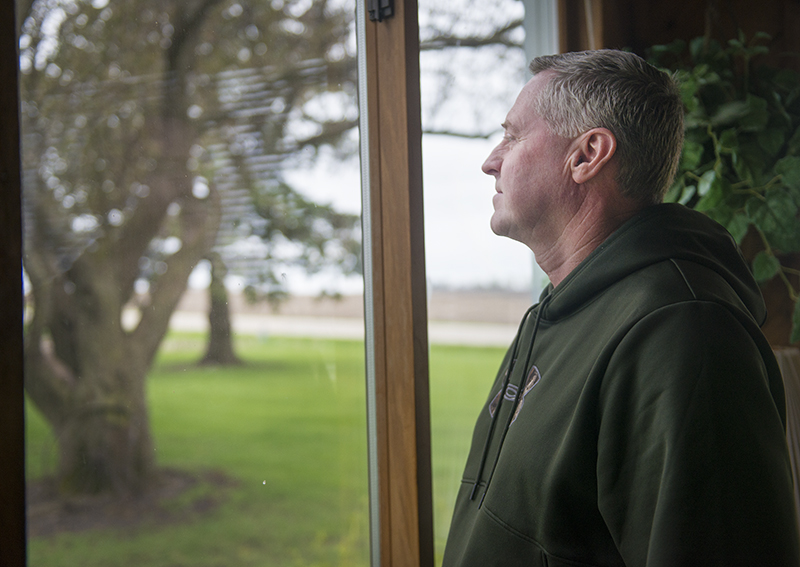 Steve Peterson of Alden was 8 years old when the Black Sunday storm came through the area. The storm damaged his childhood home, which was on the same piece of property he still lives on today. – Colleen Harrison/Albert Lea Tribune

‘Something bad could happen today’

Steve Peterson, who lives northwest of Alden, said he was 8 years old during the Black Sunday tornadoes, and remembers when one of those tornadoes traveled north on Freeborn County Road 6 for 12 miles, damaging much in its path.

He said earlier that day he and his family had attended church together. His older sister, Lori, remembers coming out of church, and their father was talking with some other people about how unusual the weather was.

“She remembers my dad saying he wondered if something bad could happen today,” Peterson said. “But I think he just meant a thundershower.”

Later that afternoon, the family went over to his grandparents’ house in Alden for supper. Peterson said he remembers his grandfather going to the kitchen window and looking east.

“He said, ‘That’s strange. There’s all kinds of debris in the field,’” Peterson said.

They went outside to investigate, and by that time the emergency siren started going off.

They heard over a radio that one of their neighbors’ farms had been hit.

He said later as they came closer to their own farm, they noticed part of their grain system was missing and other buildings were damaged. All of the windows were broken out of their house.

They went to check on their other grandparents who lived a mile south and came across the Hassing residence where a 26-year-old mother of three died.

Peterson said he remembers the fire department and others trying to remove parts of the house and the adults keeping the children from seeing the worst.

“The horror of the tornado kind of hit us then,” he said.

A second fatality was three miles north of his home. The Holleschau family and others were at the farmhouse for a family reunion. He had gone up to the upper floor, and several others were also injured. Peterson said he remembers that they were completely covered with mud from head to toe.

The tornado that traveled in that part of the county was classified as an F3 or an F4 on the Fujita scale.

Peterson said at that time, the National Weather Service didn’t have the technology to predict tornadoes, so it was a total surprise.

He questioned whether there would have been fatalities if there had been at least a little bit of a warning.

Though parts of the day are foggy, he noted that the day is one he remembers every year as April 30 comes around. He still lives on the same property he did as a child. 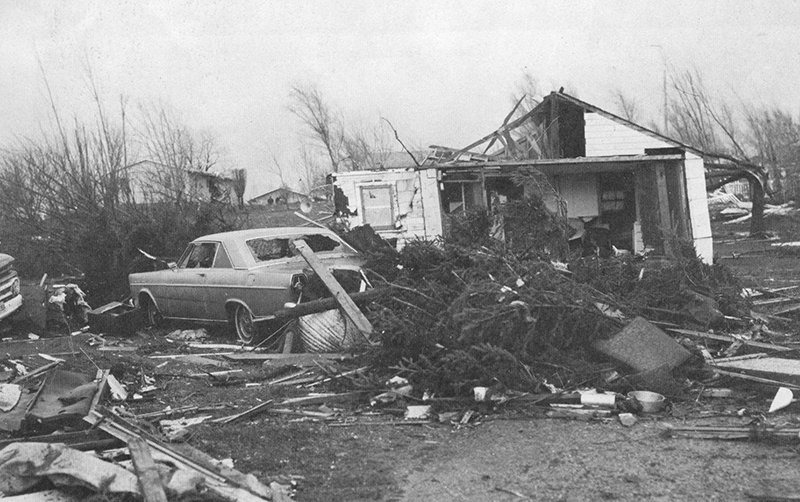 “Why are there boards and sticks in the sky?”

Arlis Smith, and her husband, Donald, lived on Will-O-Bruce Drive in the Garden Villa neighborhood in Albert Lea the day of the tornadoes. They had lived there since after they got married about 13 years prior.

Smith said she, her husband and two boys, Gary, 12, and Kent, 11, went to church earlier in the day and came home. The boys had been outside playing, but came inside because it was raining. They went down in the basement to play ping pong, and she said as they played, her oldest boy remembered there was something he needed to watch on television upstairs.

Shortly after, he looked out the south window in the house and yelled downstairs, “Why are there boards and sticks in the sky?”

Smith said her husband isn’t one to raise his voice, but that day he raised his voice and told his son to get down to the basement.

Her husband ultimately had to run upstairs and bring their son down, who was standing frozen in fear.

They went to the southwest corner of the house and before they knew it, Smith said she started feeling gravel.

“I can still feel the gravel,” she said.

It didn’t take long for the tornado to pass over, and when they came out of the basement, their garage and their neighbors’ garage were gone. There were no windows in the house, and the living room was full of glass. The two houses across the street were completely gone.

Their house had cracks in the foundation and leaned to the east but was able to be repaired. They still live in the house today.

She said her family was lucky that no one got hurt. 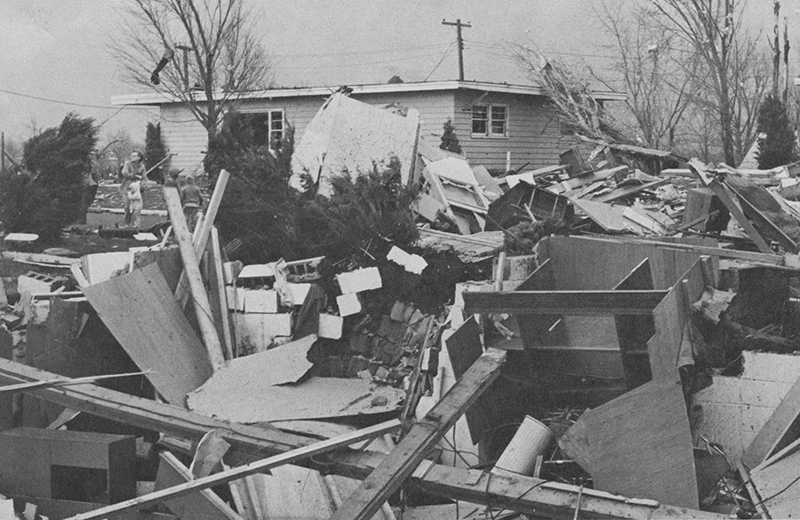 Elmer Manuel and his wife were two of the five killed in Freeborn County during the April 30, 1967, tornadoes. They lived here at 206 McArthur Drive in Albert Lea. – Tribune file photo

‘Everybody was out trying to help somebody’

Staloch said he thinks about what happened that day every year as the date approaches.

He said though many were devastated at the losses from Black Sunday, he was impressed with how united people were in the aftermath.

“It was a thing where the whole community got together and helped each other. Everybody was out trying to help somebody,” he said.

According to a publication printed by the Quad County Rotary Press in Waseca, Freeborn County sustained $5.5 million to $6 million in damages — $4 million of it in rural areas, with 75 to 100 farms damaged from light to total destruction.

In Albert Lea, damage was estimated at $2 million, with 26 homes destroyed, 64 substantially damaged and 60 homes with minor damage. 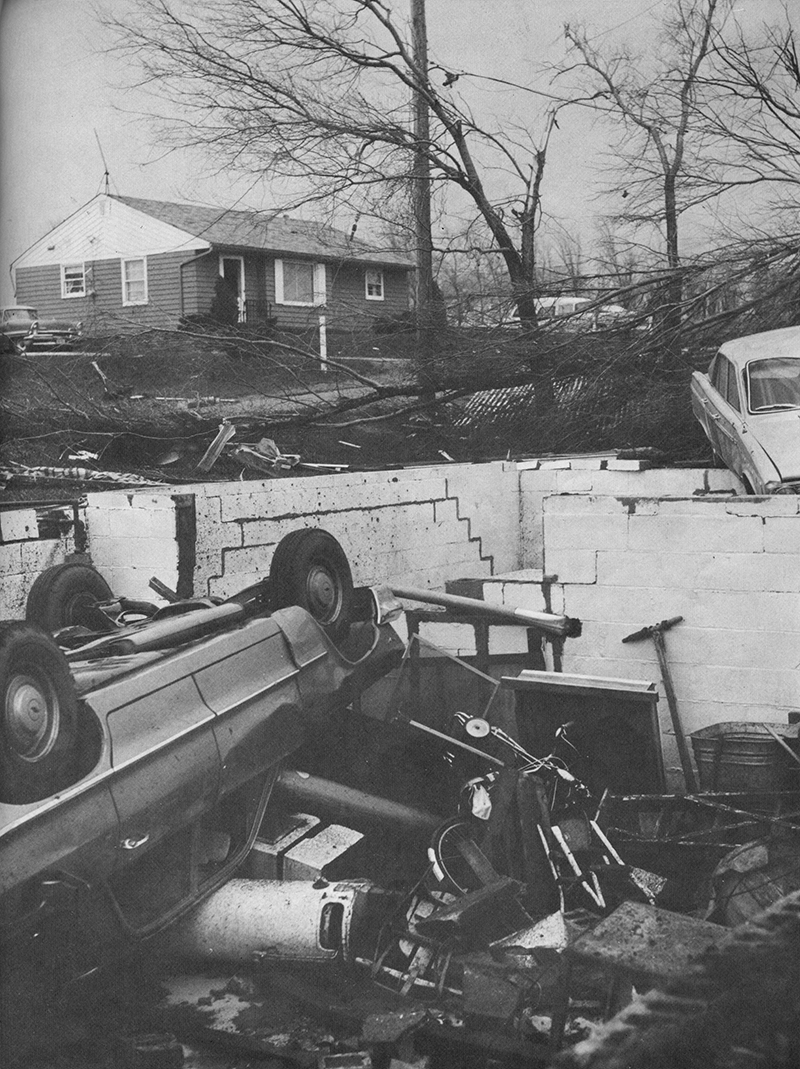 This house was gone, but the lawn and garden equipment, a bicycle, a hot water heater and an automobile remained. –
Tribune file photo