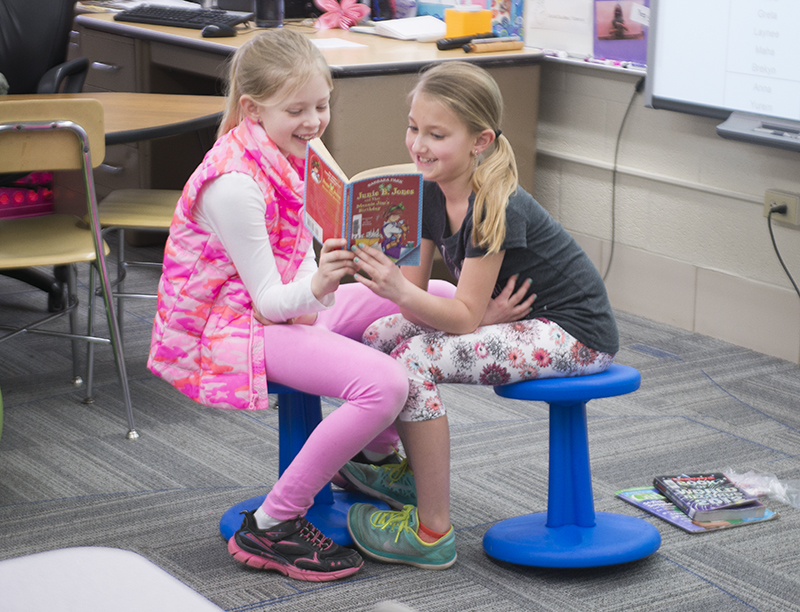 Nordlocken, who was the first teacher at Lakeview to remove structured desks from her classroom, explained that large class sizes contributed to the decision to move to flexible seating. She said it was a matter of needing more space.

“My biggest problem is that I had almost 30 fifth-graders, so like 30 people as big as me in my room,” she said. “That was a lot.”

After talking to some colleagues at Sibley Elementary, Nordlocken removed the desks, brought in tables and slowly started bringing in different seating options.

“I had a lot of students that didn’t want to sit in their desk anyway. They just would rather stand or sit on the carpet or find a different spot. And so most often, no one was even in their desks and it was taking up a huge amount of space,” she said. “The desks were filled with a lot of stuff that just became a dumping ground for everything.” 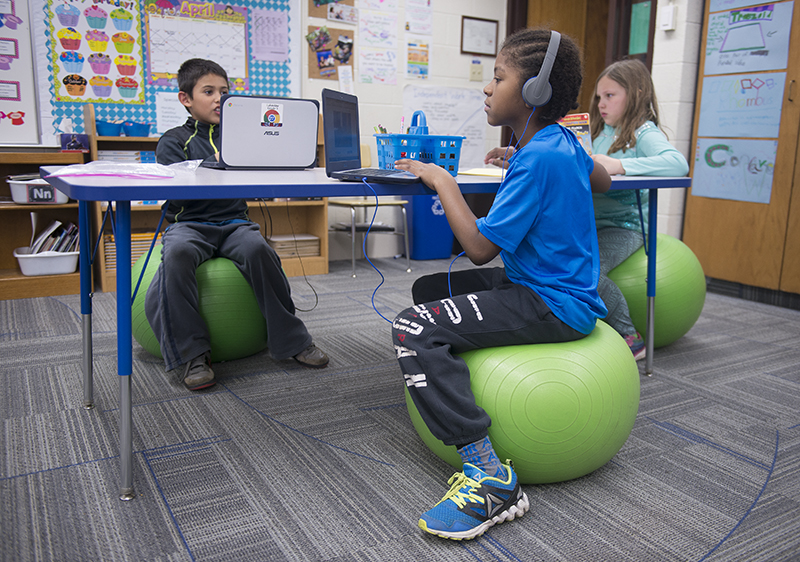 Types of flexible seating include sitting on an exercise ball or “wobble seat” instead of a hard chair, sitting at a very low table on a cushion on the floor, at a high table with tall stools or around a round table. Standing desks have also been incorporated into classrooms with flexible seating.

What started as a solution to a space issue quickly emerged as a solution to many more problems in Nordlocken’s classroom. She explained that her students are more willing to tune in, they are working harder, they stay on task and they have a little bit more of a choice.

“There are so many kids that need to move to think; they are very active,” Lakeview third-grade teacher Dawn Ware said about the flexible seating trend. “Nobody here thought of (flexible seating). It just makes sense. It’s like, ‘Oh why didn’t we think of that sooner?’”

As far as curriculum, nothing has changed in Nordlocken’s classroom because of the seating. While instructing, she has her students gather in the front of the classroom to take a seat on the carpet or floor. “That is how I do most of my instructing,” she said. “The only time I have my students sitting in (the flexible seating) is when they are working on group projects or independently.”

Nicole Peterson, another third-grade teacher at Lakeview who has incorporated flexible seating, said her class has benefited from the changes.

“Well, when you think of us as adults even, I don’t sit in the same chair all day,” she said. “Depending on what I am doing, if I am reading I want somewhere comfortable, and if I am doing something else, sometimes I like to roll in my chair. It is the same kind of idea as letting them choose what works the best for them at any given moment.”

The teachers said the new seating hasn’t caused any distraction in their classrooms. Rather, they saw the opposite effect.

“There are so many kids that need to move to think; they are very active,” Ware said.

Nordlocken said the transition to new seating came with ease.

“It took a little time, especially with the balls and stuff, just coming up with some rules and how we wanted (the change in seating) to look, but I think because we spent a little time on it, kids are really respectful,” she said.

“Sitting on the balls, the kids know there is an appropriate way to do that,” Ware said. “You know, it’s not a gym and they are not supposed to be bouncing. It actually was very smooth, I thought.”

Peterson talked about how important it is for her students to collaborate. She said students had trouble working through “productive struggles” together when they were each isolated in their own desk, noting a “this is my spot, this is where I stay” mentality. Peterson believes the new seating allows for more collaboration and fluidity in her classroom.

“Now it is just a shared space,” she said. 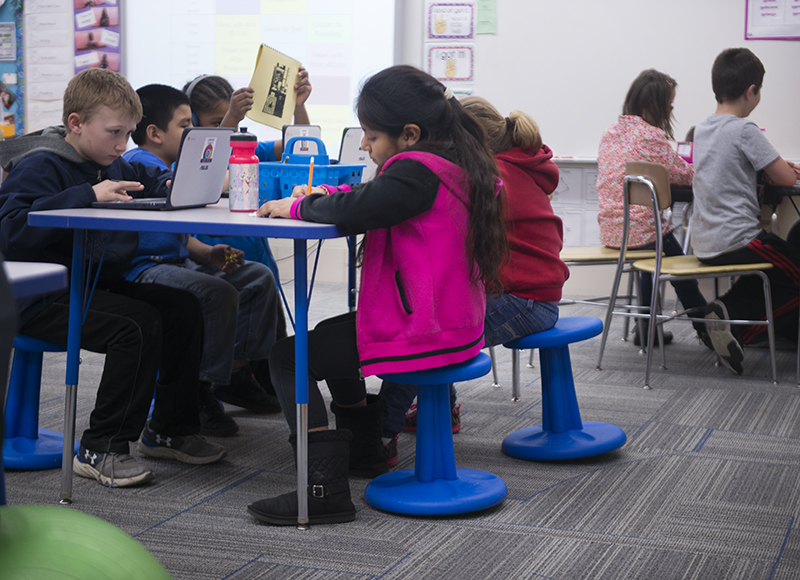 Ware said children no longer had a sense that they were confined to a certain seat, a particular set of school supplies or a determined group of peers. She said she found students seeking out certain types of seats rather than certain types of students.

“The kids that I wouldn’t expect to work together before, now happen to be by each other and will end up working together. They mix up so often and then they pick different places that I mean they talk to a huge variety of people,” Nordlocken said. “And they are less worried about sitting right by their friend and they are more worried about which seat they want to sit at. It mixes them up and they are building relationships with different people.”

The teachers could not recall a single situation where cliques formed within the different seating arrangements, despite the groupings of tables. Beyond that, the consensus among the teachers was that they are not worried about their students transitioning back into a more structured classroom later in their education. The seating, they said, seems to make the children more adaptive to different environments, fostering a more fun, free and creative atmosphere to learn in.

Certain subjects have seen more changes than others with the new structure. Ware explains that reading classes were already more collaborative and discussion-based in her classroom. The teachers all agreed math was a subject that saw significant changes with the flexible seating arrangement.

“I think you see the changes to be more helpful in math (than reading),” Peterson said. “When they are working on math problems, before when they were in their desks, they might not have thought they could just turn to their neighbor. Where now, it is a little more open.”

Although the change has been positive so far, the teachers agreed there was one thing missing with the new arrangement: a space for the students’ belongings.

Ware expressed her concern that there are some children who the change is really hard for. She said it is hard for some students to give up that little bit of personal space and noted the biggest hurdle she has seen so far is making sure students have space for things such as their favorite eraser. A few solutions to the personal space problem have been the distribution of lockers or personal baskets inside the classroom to store their belongings.

The teachers expressed their enthusiasm for the new structure of seating because they were grateful for the time they saved cleaning the classroom and desks each week.

She said the changes were not only well-received and encouraged by school administration and students, but especially by parents.

The teachers at Lakeview Elementary School expressed their gratitude for the acceptance, help and encouragement that they have received with the changes in their classrooms.

The program has been primarily funded by online donations. Parents of Lakeview students have funded most of the transition over to flexible seating in Albert Lea elementary schools. Ware noted that parents who know their children have attention or focus issues have been especially supportive of the innovation because their children can now move in class, burn some energy and not be distracting.

The school is now home to five flexible seating classrooms.

“I don’t know if I could ever go back now,” Nordlocken said. 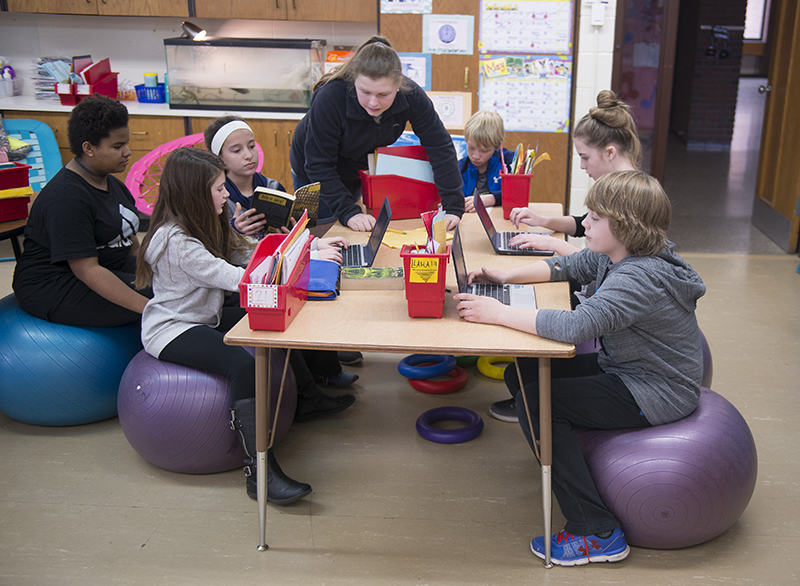