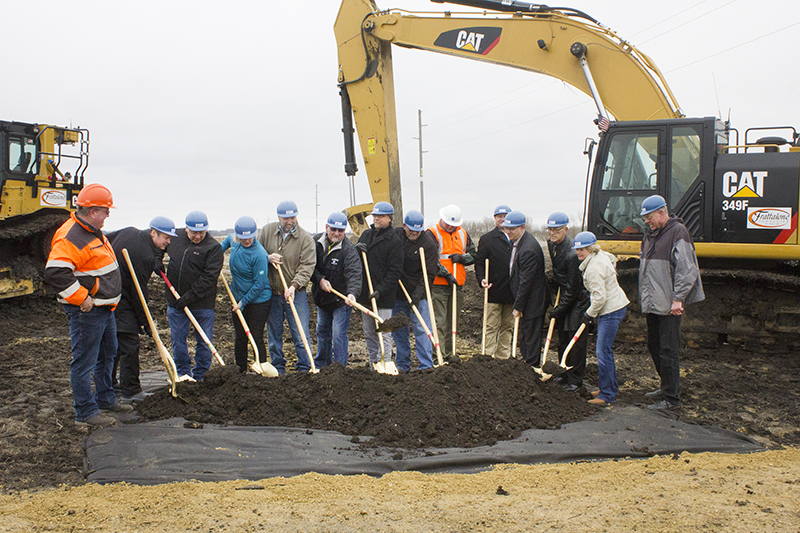 Officials break ground Friday on the site of a confined disposal facility, which will be used to settle and siphon off water during the dredging project. - Sam Wilmes/Albert Lea Tribune

Local officials broke ground Friday on a project that will play a crucial role in Fountain Lake dredging.

Shell Rock River Watershed District officials hosted the ceremony on the site where a confined disposal facility will be.

The CDF will siphon off and settle water after a mixture of water and sediment is dredged from the lake. The site is north of Interstate 90 and 1 1/2 miles north of Fountain Lake. The district purchased adjoining properties for the project in 2016.

The ceremony was attended by leaders from the city of Albert Lea, Freeborn County, Albert Lea-Freeborn County Chamber of Commerce, Albert Lea Lakes Foundation and other officials who expressed their support for the project.

Administrator Brett Behnke discussed the history of Albert Lea lakes and the formation of the Lakes Foundation and Watershed District.

“This is a historic day for the Shell Rock River Watershed District and our community,” he said. “Years of planning, designing and engineering have gone into the construction of the CDF, and this marks the first visible sign of the Fountain Lake dredging project.”

Prior to the event, Behnke thanked the Department of Natural Resources, Board of Water and Soil Resources, the city and the county for their help in the process.

“This really kicks off the dredging project, but it also signifies the hard work of the community, the value they put into the lakes,” he said.

According to Director of Field Operations Andy Henschel, earthwork will begin immediately at the site under the direction of the district and its prime contractor, St. Paul-based Frattalone Companies. The CDF is expected to start holding sediment in August.

Environmental engineering company Natural Resource Technology is the district’s main consultant for the project. NRT will manage the design, permitting and monitoring for construction.

“This upstream progress has allowed us the opportunity to further our efforts in the Fountain Lake restoration project,” Behnke said.

The district is looking to extend its 1/2-percent sales tax for either 15 years or until $15 million has been collected for the project. The bill is included in House and Senate tax bills that have passed their respective committees.

Lakes Foundation government relations consultant Judy Erickson said she is confident a tax bill with the sales tax included will pass this year.

“We are perfectly positioned,” she said. “We have our language exactly the same in both bills, so we are in a perfect spot.”

According to Erickson, any hurdle the sales tax could face rests in the fate of a larger tax bill and differing proposed tax relief packages between Gov. Mark Dayton, the House and the Senate.

“Our piece is safe, but it’s in the moving parts of the big pieces,” she said.

The Freeborn County Board of Commissioners could address a district petition Tuesday that would grant the district authority to implement a property tax officials said would provide funding security for the first phase of the dredging project, which would remove 550,000 to 690,000 cubic yards of sediment from Edgewater Bay.

Behnke said he is optimistic commissioners will approve the petition.

“It’s going to be a successful vote for the Watershed District,” he said. “We’re looking for them to be a partner and to help move this project forward.”